In the 90s, sugar-laden cereals inspired by sweet treats were all the rage—Oreo O’s, Cinnamon mini buns, Cookie Crisp, Rice Krispies Treats cereal, the list goes on and on.

But now in the 2000-somethings we’ve learned that eating that much sugar for breakfast isn’t the best idea since it can make us kinda sluggish all day.

Or…have we learned that yet?

Maybe we haven’t. Post Cereal has recently decided to team up with Sour Patch Kids to create a cereal based off the sweet and sour candy.

While we’re not going about to knock something until we try it, we don’t really want to try it because it honestly sounds a little terrifying. The cereal is described just as the candy is: “First they’re sour, then they’re sweet,” and are shaped just like the real candies are.

Not to worry, they’re not a gummy candy consistency; the creators basically took the flavor of the candy and put it into cereal form. One thing to note: In cereal form, they’re all the same flavor. So the red ones, which are cherry flavor in candy form, will taste just like the green, or sour apple in candy form.

Lee Breslouer, a writer from Thirllist, reviewed the cereal and was just as skeptical as we were at first, but said once he had them, they were honestly great. “This tastes like Sour Patch Fruity Pebbles, and that is not a bad thing,” he says. 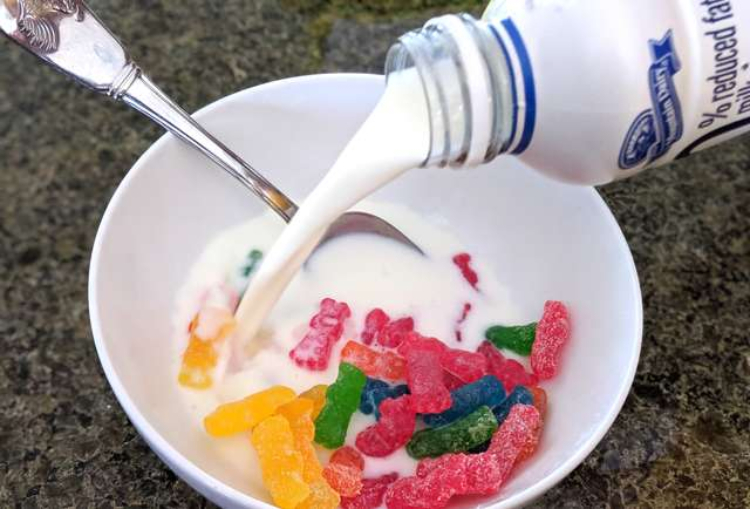 He also clears up a lot of misconception about how the controversial cereal flavor would taste when milk is poured over it—which was a lot of people’s main concern. Would it taste like the milk is sour? Would it just be an awful combination? Surprisingly, nope!

“Good news, people! The milk does not get sour, but it does retain an artificial tartness that tastes pretty good! It’s like if you made Fruity Pebbles cereal milk and added a magic dusting of that tart flavoring. Don’t worry: you can drink the milk at the end,” he says.

This cereal isn’t going to be for everyone, but he has one perfect conclusion that makes a lot of sense for who the cereal is actually for: “If you’ve ever woken up on a Saturday morning and thought, ‘I sure wish it were socially acceptable to eat a bag of Sour Patch Kids right now!’ this cereal is the answer to your prayers,” he says.

So basically—it’s either for the really hungover adult or the child who loves starting their day with a huge bowl of sugar.

No matter who you are, if you dare to try Sour Patch Kids cereal, you can find it at Walmart around the end of December, but are also said to be coming back in June of 2019, incase you miss it this time around. Each box is about 4 bucks a pop.

What are your thoughts on Sour Patch Kids cereal? Would you ever try a bowl? What’s the weirdest cereal you’ve ever had?