Watch This Solider Surprise His Mom at Her Work!

This soldier takes a seat on a bench outside his moms’ workplace, opens up a newspaper, and begins to read. Nothing seems too strange about the situation; you might imagine he’s waiting to pick up his mom for lunch. But the thing you need to know? This soldiers’ mom doesn’t know that he’s home.

Few videos are as heartwarming to watch as “soldier surprise videos,” as they’re often called. It’s pretty self-explanatory; some soldiers, when they’re coming home, want to surprise their family. And they want to do it on film so they can post it and blow up the internet. Naturally. This solider has just such a plan in mind.

This video was setup perfectly. A family member or friend was waiting with a camera maybe a couple hundred feet away from the solider, who was sitting calmly on a bench, reading a newspaper. They were planted right outside of his mother’s work, right at a time when he knew she’d be coming outside.

Fair warning, this video doesn’t START in the best way. As it turns out, the soldiers’ mom went the wrong way at first, which would explain the long few minutes of nothing in the beginning. (If you’d like to get right to the good stuff, go to 1:25.) 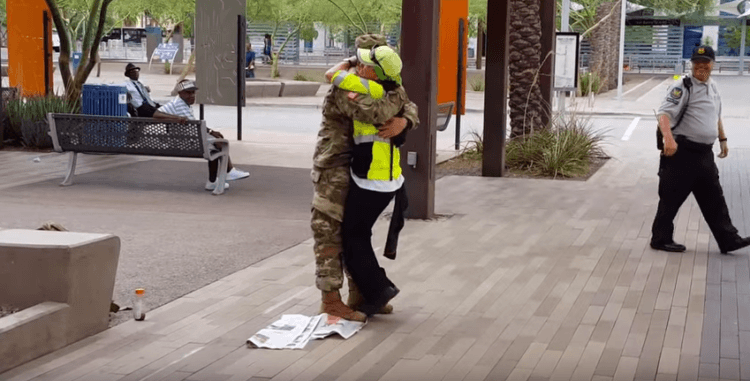 Larry S
Eventually, his mom finds her way and starts to head to where her son is waiting behind his newspaper. She’s the woman in the yellow shirt, keep your eyes on her!

Mom is walking along normally, maybe heading off to lunch, not paying attention to much going on around her. After she passes the soldier sitting outside, she turns briefly and looks at him, but then keeps walking. We seriously were worried she wasn’t going to recognize him! He does have sunglasses on and a newspaper in front of his face, after all.

But you can’t stop a mother’s intuition.

The mom keeps walking for a second before she does a hilarious double-take! She looks back at the soldier, like she doesn’t understand what’s going on, before she approaches him.

Then, she has the best reaction that we have EVER seen.

Suddenly, she’s yelling his name, screaming, “What are you doing here?!” at the top of her lungs. She runs to her son and jumps on him, literally wrapping her legs around her son. Even when he puts her down, she can’t stop screaming incredulously and jumping up and down.

At one point, she notices the camera over her son’s soldier and has a hilarious reaction to that as well! She points to the camera, yelling and smiling in disbelief that their entire touching reunion got captured on video.

You can hear him trying to explain to his mom why he’s there, what he’ll be doing in town, and how he wanted to surprise her. The two barely stop hugging the entire time and they’re both clearly emotional and overjoyed to see one another! We can’t get enough of heartwarming videos like this one.

What do you think of this amazing video? Share your thoughts in the comments section below.