Ah, snow days. The bane of every parents’ existence and yet, the joy it brings to kids. How many times did you sleep with a spoon under your pillow or wear your pajamas inside out as a kid on the night before a storm in hopes that these superstitions would help cancel school?

Snow days were always the best as a kid. Without having to go to school, the world was your oyster. You probably got to sleep late, go outside and play in the snow, and then come inside to the smell of freshly baked cookies. You probably ate snow cones. Drank hot chocolate by the fire. Watched a good movie. Ah, the days. That’s why it was always such a big deal to have to wait until your school “called it.” You waited patiently by the phone, radio or computer to learn what districts were not going to allow their kids to risk their safety and head to school that day.

But have you ever wondered how superintendents make those decisions? At what point in the weather forecast do they actually decide it’s appropriate to cancel school?

It actually varies by where you live. And after years and years, we finally have our answer. And it’s all thanks to a nifty graphic created by data scientist, cartographer, and designer Sasha Trubetskoy.

He made the graphic below that shares exactly how much snow each state needs to get before school gets canceled. The graphic was then posted on Reddit where people can attest: Yep! This is all very true.

What’s crazy is that there’s a lot of the world—states like the Carolinas, Florida, Texas, and more— that closes for “any snow” (which is the lightest green color), and also includes even just the prediction of snow.

And then you’ve got the Midwest and Great Plains, where school closes on more than just snow—it depends on wind chill and temperature than on snow accumulation.

Additionally, he lists some disclaimers: “Many jurisdictions in California and other western states have significantly varied snowfall, depending on elevation. This makes it difficult to find an “average” number, or often makes it misleading,” Sasha says. “Urban areas like Chicago and New York have more resources to clear snow and often need more to cause closings.”

He also notes that policies have changed in the last few decades, so if you ever see a grandparent roll their eyes at schools closing for a tiny dusting, that’s why!

Check out the cool snow map below! 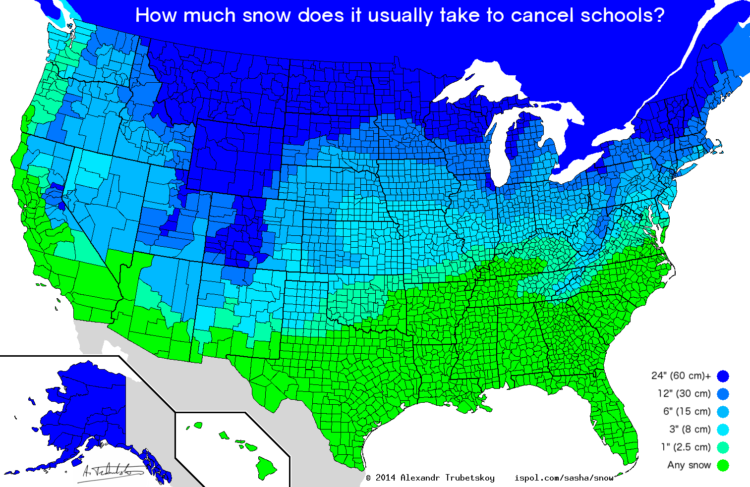 Do you agree with this map? How often did you experience snow days as a kid? What were your favorite snow day traditions?