We’ve all seen a movie where things start out normal and happy, and the main characters are minding their own naive business. And then things go left within the first few minutes of the scene.

Little do our unsuspecting characters know that something’s been brewing in the background. Such was the case in this video when the lady of the house was busy cooking at the stove, and her son went to grab a drink from the fridge.

They had no idea there was a creeper in the house, wedged on top of the refrigerator in a dark, cramped space. Out popped a snake’s head from its hiding place, startling the son. Seen here is an animal trapper who is onsite to capture the creature from a residence in a Queensland, Australia suburb.

And we get to watch the whole thing go down! While some of you may be indifferent to what happens to the critter, snake fans will appreciate how gently this man is handling the situation. At first, you can’t see a thing until he shines a flashlight under the cabinet. It’s a python!

Armed with a snake hook, he goes in, trying to slide the guy out. But the snake is so suspicious of who’s invading its chill spot that it sticks its head out quickly to inspect and then retreats. It’s our first clue that this won’t be easy.

More maneuvering is necessary to try to lure it out, so the freezer door is opened to allow for better access. It looks as if the slinky fellow will come down. With the animal in both hands, our snake catcher is trying to tug him out. But his upper body is stuck!

This is turning into a real nail-biter as he tries to free the top part. He finally gets the snake to budge and has a hand near its neck, but then they have a face off. I like how he gently speaks to it, but the stubborn reptile just won’t let go and then coils its tail around the refrigerator. Once undone, the trapper sets him on the floor to get a good gander at its size. 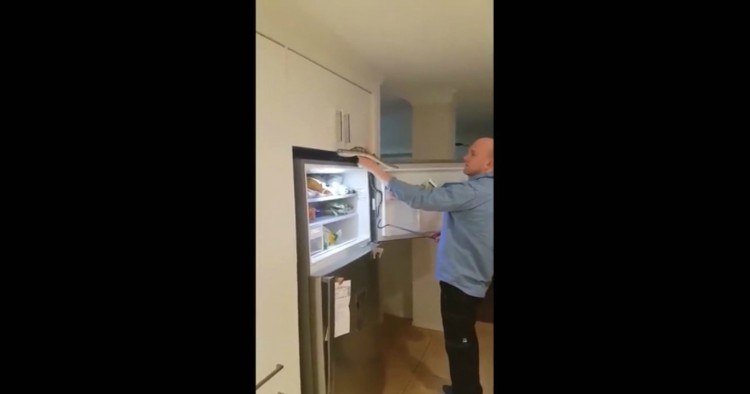 
Click below to see the family’s reaction to a “loose” snake slithering around and how things get wrapped up. As you may know, Australia is home to an abundance of exotic wildlife that most of us will only encounter in a zoo. Pythons and other snakes are no strangers to breaking into people’s houses and making themselves at home.

Luckily, this one wasn’t venomous or looking to snack on the family pet, but his vacation had to be cut short. Snake catching is also a big business in this country so it’s not hard to find someone to catch and release them in a jiffy. According to the law, buddy will have to get released to either the nearest wooded area or within 7 kilometers (4-5 miles) of where caught.

That means no jail time or death penalty for this cold-blooded vandal. At least this story ended peacefully!

What do you think of this snake wrangling job? Have you ever had a large animal sneak into your home? How did you react?