Everyone has their own ways to beat the heat when hot weather takes over. Cranking up the AC, hitting the pool, and downing a few frozen treats always works, but so do outdoor water sports.

What comes to mind when you think of outdoor water sports? Jet skis? Whitewater rafting? Surfing? You’re being fancy. Sorry, this time we’re looking at water sports that take place closer to land. More adventurous than a water balloon fight but cheaper than a water park is the ubiquitous water slide.

Hooked in up backyards everywhere, the water slide is fun for kids, but can also be a total fail for grownups. Who hasn’t taken a shot at taking a running start to glide across a slick sheet of plastic? That is, if you’re age 12 or under? It doesn’t always go well, as showcased in the clip from America’s Funniest Home Videos below.

First, here’s what should have happened: person coasts across the slide into the cup-shaped catch at the end. That is not what happened to this guy. But things happen when you rig up a homemade water slide on your own volition. Unplanned, wrong, cringeworthy things can happen.

Set up on grass, this two-tone makeshift slide was built to be adult-friendly. Longer and bigger than the average version that you buy in the store, it looks like it’s partly made of trash bags. It also ends on an upward incline, so you can imagine how a daring ride could possibly finish. Catch that? It’s not fixed on flat terrain. 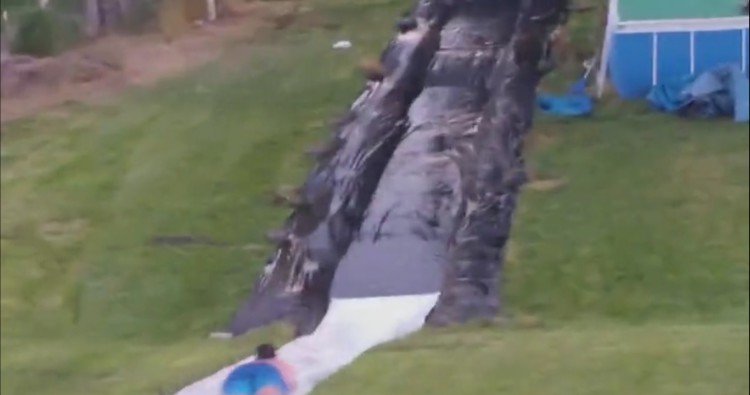 Watch as this man throws his sizable body onto the slip-and-slide. It starts off without a hitch. Watch. Listen. Listen some more. It’s as if the sound serves as a warning itself. Something is amiss. Somebody should’ve warned him. Somebody should’ve helped him calibrate his velocity in relation to the water’s density and the plastic’s pressurization and whatnot. And that giant bump in the slide too. Physics.

Because this wasn’t right. You have to see his water slide Superman impersonation through to the very end. You’ll either laugh, go silent, or contort your face in sympathy. No one but the people who were there know where he landed. Not only were they laughing, but it looked like the tree behind the slide was too.

This man’s graceful turn has earned him a spot on the list of other epic water slide surprises. To be fair, the summertime toy invites danger, injury, and the potential for hilarious disasters by its mere shape and inherent logistical challenges (hello rocks and bumps). When people alter one or make their own homemade version, anything can happen.

Grownups and slip n’ slides don’t always make the best combination, but it’s fun to try. If there’s anything we can learn from this guy it’s to avoid slippery slopes, and perhaps the pool is a better option.

Would you have made an attempt on this water slide? Have you ever made your own slip n’ slide? Do you have a water slide adventure to share? Tell us in the comments!