It’s sad but true: Burglaries happen far too often in this world. We can only do so much to prevent them—lock our houses, invest in alarm systems, or set up fancy cameras at our front door. But if you’re not being vigilant in preventing a burglary, they could sneak up on you where you least expect it.

Recently, there has been a number of unique burglary incidents that occurred in several greater Los Angeles surrounding areas. While this type of thievery isn’t a new phenomenon, people, especially women – who seem to be one of the most targeted people – are being warned to be on the lookout.

The type of burglary we’re referring to? It’s called “sliding.”

Picture this scenario: You pull up to a gas station to fill up your tank. What’s going through your head? Maybe it’s getting your wallet out, perhaps you’re debating going inside the market to grab a snack, or you could be thinking about what you’ll be doing later that day.

But what point do you think about getting out—and locking your door? Chances are, you probably don’t. Why would you? You never really think of a gas station being a prime area for robberies, especially while you’re standing by your car—but apparently, they are. 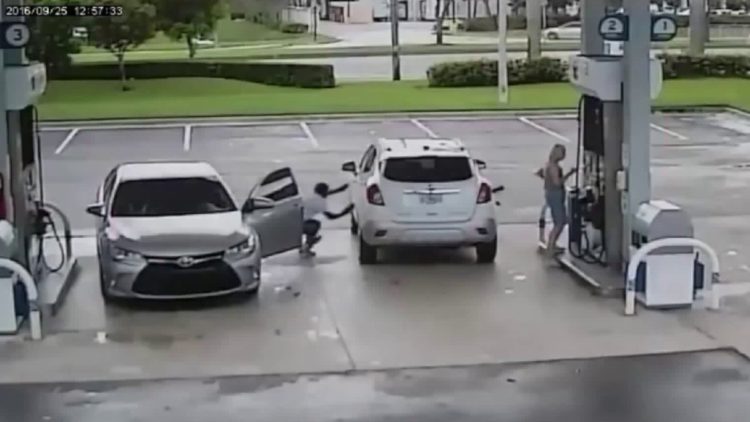 As you’re getting out of the gas to pump your gas, someone—the “slider”—in the adjacent gas stall might be waiting to make their move. What these people do is watch and wait until you’re out of the driver’s seat getting ready to pump your gas.

Then they slither like a snake out of their car and into the passenger side of yours. They stay below eye level, sneakily open your likely unlocked door and grab whatever they can find—think purses, wallets, phones, or other valuable. They then shut the door, slither back into their car, and drive away.

The whole process doesn’t take more than a total of 15 seconds, which is why it’s so easy for these “sliders” to do what they do. You’re likely too caught up in pumping gas and your own thoughts to see or hear them, so they can easily get away with it.

The best way to avoid a “slider” is to lock your door and roll up your window whenever you exit your car—even for the few minutes it takes to pump gas. Also, be on the lookout at all times and cognizant of your surroundings. And use common sense: If you see someone just sitting in their car at a gas station but they aren’t pumping gas, it doesn’t hurt to just drive away.

While “sliders” most often target women, that doesn’t mean men shouldn’t be conscious as well. Experts also say that “sliders” are typically not confrontational—they’re just in it for one reason: to steal your stuff while you’re not paying attention.

Watch the video below to see a “slider” in action—and try not to gasp.

Have you heard of “sliding” before this? Have you ever been a victim of a “slider” or witnessed a “slider in action? Share your experience to help others avoid a scary situation!