Here at TipHero, we love all kinds of little ones, from twin babies sharing marshmallows to infants jamming to guitars. Trust me, if you are having a cruddy day, look no further than a video of a tyke doing something adorable; if that won’t cheer you up, we don’t know what will. Here’s one of our personal favorites: a sleepy baby showing off her serious dancing skills!

The video starts out with a cute baby sleeping soundly  in her hot pink car seat with her toddler sister holding forth next to her in the back seat. A song is playing on the radio, which she is snoozing right through.

Then, a mischievous look spreads across the sister’s face while she looks over at her father who’s off-camera. All of a sudden, that familiar techno beat comes through the radio and we hear: “Oppa Gangnam style!”

This is when Amaya’s eyes shoot open and, without a second thought, the girl begins to squiggle her arms and legs, exhibiting her unique rendition of Psy’s famous dance.

Notice how, when she’s in the middle of her car dancing extravaganza, she looks around and tries to make eye contact with the drivers in the other cars. It’s clear that Amaya wants to share her love of K-Pop with the rest of the road!

Personally, my favorite part about this video is that this baby is so incredibly stoic. It’s clear that, for whatever reason, “Gangnam Style” is a song the she holds close to her little heart. And as for her older sis, well, we don’t blame her for belly laughing. This kid’s dance, for lack of a better term, is so random!

Without having any idea that this video would become so successful, Amaya’s dad decided to film and upload it to share with his friends and families on Facebook. Of the experience, he writes:

I posted it on Facebook first and someone snitched it from there and posted it on YouTube. So I decided to post it here so if anyone was going to get credit for it, it might as well be the one who made it! Either way I’m having fun watching all the attention it’s gotten…and for me the best part about it is that my daughters got to make a lot of people smile and laugh…HOW COOL IS THAT! [sic]

It’s hard to believe that this song’s meteoric rise to mega-fame started almost four years ago. Since the release of “Gangnam Style” in 2012, it has been viewed on YouTube over 2 BILLION TIMES! 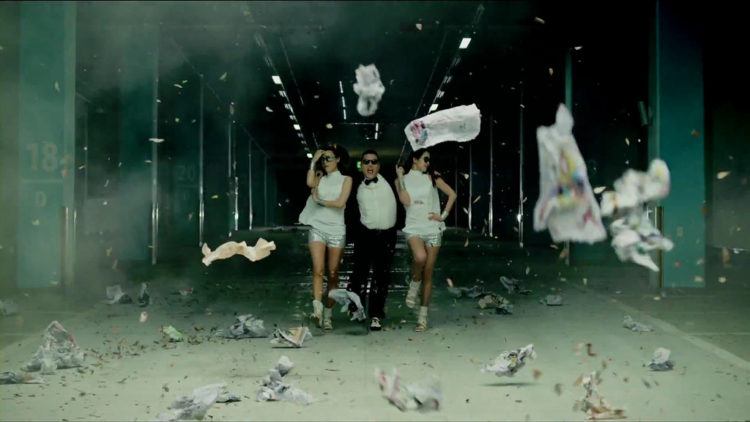 At the height of the song’s popularity, even President Obama couldn’t help but mention the phenomenon in a speech given to South Korea’s President Park.

The president said, “Around the world, people are being swept up by Korean culture — the Korean Wave.  And as I mentioned to President Park, my daughters have taught me a pretty good ‘Gangnam Style.’”

Watch the hilarious video of baby Amaya jam out to Psy’s hit in the video below. We promise you, this kid’s moves are so contagious that she will have you fist pumping right along with her!

What do you think about little Amaya’s performance? Do you have any baby dancers in your life? Tell us all about your thoughts and stories in the comments section below!