After Fertility Struggles, Sisters Give Birth to Twins on the Same Day

After five years of trying to conceive a child artificially, Annie and Joby Johnson got the phone call they were waiting for. But the news they got wasn’t the news they had been praying for. Hearts broken, the couple was about to give up on their dream of having kids. Then something extraordinary happened.

The Johnson’s were married in 2005 and three years later they decided to start their family. But no matter how many expensive and painful procedures, surgeries, and treatments the couple would undergo, they could not conceive.

For five years, they left doctors baffled. No medical professional could pinpoint why it was so hard for Annie to get pregnant.

“When we were ready, we thought it would just happen,” Annie said. “And when it doesn’t, you just feel so helpless.”

But Annie and her husband would have the kids they had dreamed of having. Just not in the way they had imagined.

When the couple got the last call from their doctors saying the latest round of fertility treatments had failed, it seemed like the fight was over. But then Annie’s sister Chrissy stepped up. With some research, Chrissy found that she would be able to act as her sisters’ surrogate mother, an option which she offered to Annie and Joby.

After some thought, the couple decided to take Chrissy up on her offer, and Chrissy was inseminated with Annie’s fertilized eggs. It took less than a few weeks for doctors to announce that Chrissy was pregnant with twins.

Just when everything seemed to be taking a miraculous turn, the story got…interesting. Medical experts say when a couple who struggles to conceive stops trying, they have a greater chance of conceiving  – which is exactly what happen to Annie and Joby.

To make matters more complicated, after doctors told a joyous Annie that she was pregnant herself, it turned out she TOO would be giving birth to twins.

Two childbirths, four babies, one aunt, and one mother.

Despite the insane odds of this situation, the Johnson family wasn’t afraid of their newfound family.

“I said to the doctor, we were ready for a new problem,” Joby said. “We haven’t been able to get pregnant for five years, so if the outcome of this is two twin pregnancies giving us quadruplets, bring it on. If the worst problem he can give us was now there would be four babies, we were ready.” 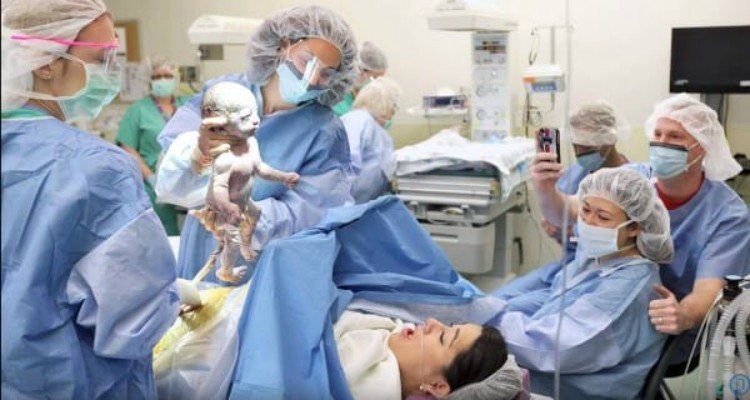 The cherry on top of this unusual situation? Both sisters went into labor on the same day, both requiring Cesarean sections for delivery. Chrissy delivered first so Annie could be present to witness the birth of her two twin boys, Charlie and Tommy. Then she went off to deliver the two twin girls, Grace and Haddie.

All four quadruplets – despite being born of two different women, they ARE quadruplets – were born extremely healthy. Now, the family of six is home living in chaotic parental bliss!

What do you think of this amazing childbirth story? Share your thoughts on these bizarre quadruplets in the comments section below.