When Darla Pritchard and her husband started trying to have kids, they were met with a sad reality; it would be more difficult for them to conceive than the average couple, putting their chances at having a child naturally very low.

After an unsuccessful first year, the couple sought help, but were only met with confusing answers. As it turned out, after many exploratory procedures, their infertility was an in-explainable, which only made the couple feel mo helpless than they already did.

Darla and her husband, Mark, decided to commit to hormone treatments, and do so for five long years. They even attempted an in vitro fertility treament. Sadly, nothing seemed to be working.

Just as things were looking grim, Darla’s sister, Dana, stepped up to save the day. Darla’s family was so sad, watching her and her husband struggle for children for so many years. So when Dana felt that she was the only person in the family who could help her sister, so she did something incredible: she had her sister’s child for her.

The doctors decided to attempt a second in vitro fertility treatment with Dana, using the seven of Darla’s eggs were left over from the first procedure. These eggs were fertilized and implanted in both Darla and Dana; happily, Dana’s started to develop right away.

But just when it was announced that Dana was officially pregnant with the Pritchard’s child, something incredible happened.

Studies have found that once a couple stops trying, at least physically, their likelihood of getting pregnant somehow increases. This is exactly what happened to Darla and her husband.

Once it was official that Dana was having their child, the pair immediately found out that they were pregnant…with twins. 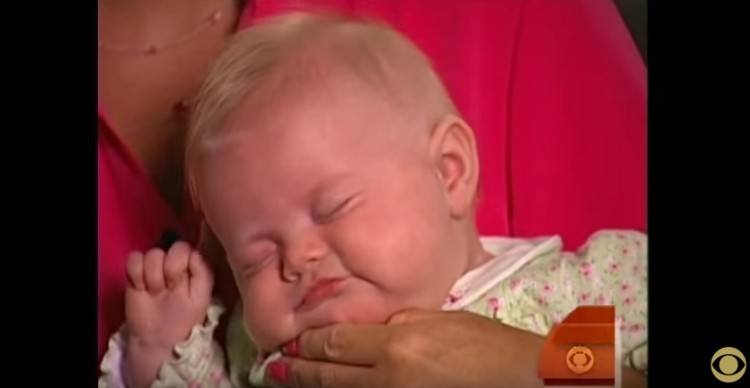 CBS
Nine months later, Darla gave birth to beautiful healthy twins Mallory and Wesley. Six weeks later, but not on the same day, Dana gave birth to Darla’s third child, Maddie. Despite the fact that these siblings were born on different days and of different women, they are technically triplets. All three children were made with Darla’s eggs and her husbands sperm, making them biologically not just siblings but multiples.

Naturally, this has been a huge blessing for the Pritchard family! Having previously thought they couldn’t have children at all, now having three healthy kids is like a dream come true for the couple.

The next step is for Darla to officially adopt Maddie. Technically, because she was born of her sister, Darla has to go through the legal adoption process to truly call the baby her own!

While the legal implications may be complicated, we think the bottom line of the story is clear: these babies, no matter who birthed them, are going to be so loved by so many people. To the Pritchards and their family members, these kids are true miracles, whom we’re sure they’ll forever cherish.

What do you think of this amazingly touching story? Share your thoughts on Darla and Dana’s story in the comments section below.