Mom Baffled When She Finds She’s Not Having Twins

Kate and Peter Hill of Brisbane, Australia, had a difficult time conceiving naturally. In 2006, Kate was diagnosed with polycystic ovarian syndrome, an endocrine system disorder that made it impossible for Kate to get pregnant.

But the couple did not give up; they dreamed of having a family and were going to use modern medicine to their advantage until they got their dream. Kate decided to undergo a hormone treatment to help facilitate a pregnancy, and after months, Kate thankfully learned she was pregnant with twins.

However, their celebration of this success was short lived. Just weeks into her pregnancy, Kate learned that sadly, one of the babies did not develop fully. But despite this sad realization, Kate and Peter couldn’t wait to meet the miracle baby girl who survived in the womb.

Just 10 days later, Kate went in for her next ultrasound, not expecting too much to be different — when she learned something incredible. Kate was pregnant. Not just with the “miracle daughter” who originally survived, but with a second baby. As it turned out, it wasn’t the original twin who didn’t survive, but an even less likely scenario; Kate has conceived again while pregnant with her daughter.

As most of us probably know, women stop ovulating while pregnant. This prevents them from getting pregnant WHILE pregnant. But Kate just happened to be the rare exception to that rule. 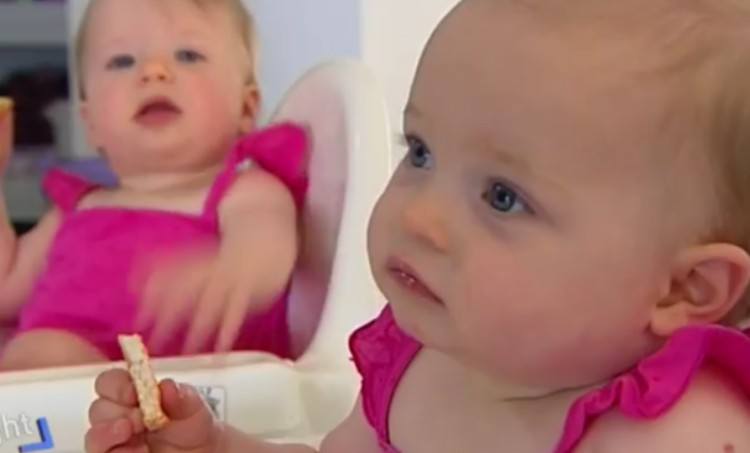 Today Tonight Adelaide
The Hills’ doctor, Dr. Brad Armstrong of Greenslopes Private Hospital, was absolutely baffled. In all his years of practicing medicine, he had never seen a case like this before.

So how did this happen? According to the medical community, the rare phenomenon of becoming pregnant while already expecting is known as superfetation. This occurs when a pregnant woman continues ovulating after conceiving, allowing for a different sperm to fertilize another egg.

As a result of superfetation, Hill conceived twins, Charlotte and Olivia, 10 days apart. While the girls, who are now 10 months old, were born on the same day, they had different due dates and were born at different sizes, weights, gestational development, and blood types.

Because superfetation is so rare, only 10 known cases of the phenomenon have been documented in the past. One case occurred in 2009, when Arkansas woman, Julia Grovenburg, first conceived her daughter Julia, and then two weeks later conceived her son Hudson, ABC reports.

Being so rare, Dr. Armstrong could barely find the resources to correctly identify why this occurred.

“Superfetation is so rare that I could not find any literature in the medical review websites at all,” he said.

The best conclusion experts can come to is that Kate’s husbands’ sperm stayed alive for 10 days, long enough to fertilize the second egg released. The lucky parents now call their babies “little miracles” and are thankful every day for their rare twist of fate.

What do you think of this extraordinary story? Share your thoughts on these rare twins in the comments section below.