How This Wedding Photo Session Went From Romantic to Silly in a Flash!

Posing for wedding photos can be tricky business, especially considering the fact that, these days, these treasures can easily get circulated over the Internet to ex-boyfriends, former high school teachers, and even perfect strangers!

Nevertheless, every once in a while a truly hilarious photo bomb will level the “snobby wedding photo” playing field, and make everyone crack up. Case in point: This gorgeous picture of a couple in love, standing in front of…well… another couple in love.

Confused yet? Let us start at the beginning…

Like most soon-to-be newlyweds, bride and groom Jenessa and Brad McKillen wanted to get some greats shots of themselves enjoying their wedding day. On top of wearing some really amazing threads, the two also had a beautiful backdrop for the pictures, Jenessa’s family farm.

The blushing bride told BuzzFeed News that the two decided to take advantage of the rural setting because it would give both the photographer, Rebecca Sprau, and the couple “lots of different places to do pictures.” Sounds reasonable to us! 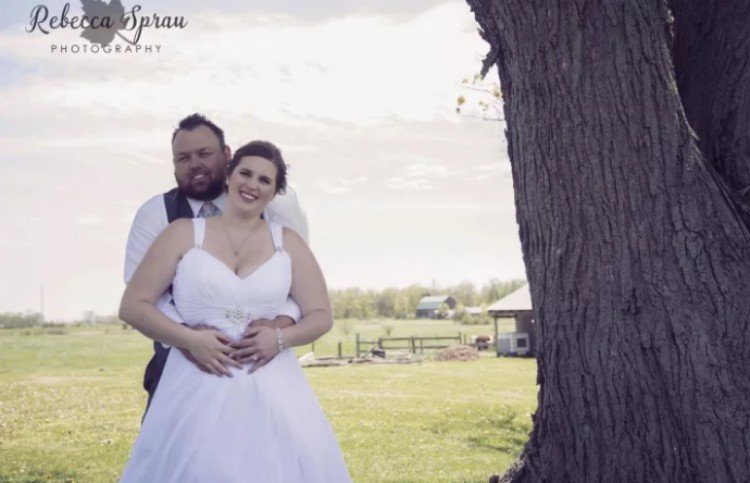 Rebecca Sprau via Wochit Entertainment
So, the couple went along with their plan, standing in front of different rustic objects with the camerawoman snapping away. All was quite routine, UNTIL Sprau suggested that Jenessa and Brad stand in front of a group of cows.

At first, the couple was dubious, but when the photographer explained her artistic vision, Jenessa and Brad though that it might be “different and fun” to have this unique addition in their wedding album.

From there, Sprau took a few shots until, suddenly, the seasoned wedding photographer burst out laughing. The couple then turned around and were met with an image that is cringe-worthy, to put it lightly! Let’s just say that two of the cows were getting rather friendly behind the newlyweds. Awkward!

Of course, it was a funny moment that the three shared, but Sprau didn’t realize just how hilarious the shot was until she reviewed the photos later that night. “It’s like one of those once-in-a-lifetime shots that you’ll probably never get again,” the photographer said.

Now, to be totally fair to the cows in question, it turns out that there wasn’t anything hot and heavy going on between the two. In actuality, the two animals in the shot were female and, according to Sprau, were just exhibiting natural behavior.

OK, we get that the angle and the timing just happened to make the situation seem a whole lot more shocking, but we don’t really care—this photo will ALWAYS be funny to us!

To see this risqué picture of two heifers photobombing a wedding shoot for yourself, be sure to click on the video below. Do you think Jenesssa and Brad ended up hanging this money shot on their wall?

What do you think of this hilarious photo bomb? Did you have something funny or unexpected happen during your wedding photo shoot? Are you surprised that the shot has gotten so much social media attention? Tell us all about your thoughts and experiences in the comments section below!