The old wisdom found in the saying, “Put yourself in someone else’s shoes” is generally a way to teach empathy and compassion. You learn about acknowledging the beauty in others. But more importantly it can help one to gain perspective, and sometimes the gift of humility too.

A hairstylist in Kentucky posted a picture on social media of someone else’s shoes – those of her client. Ashley Bolling, the owner of Captivate Salon & Spa, watched the woman have a seat in her chair and then fall asleep. And no, she didn’t post the picture because she was mocking them. And it wasn’t because she admired the woman’s personal, style either.

In a Facebook post, Ashley went on to describe how her client was an exhausted nurse who had been up all night working. The pic she shared was of her client’s sneakers. Ashley had an epiphany while she worked on her hair. She said that as she rested her friend’s head on her stomach and put foil in her hair, she thought about where her shoes had been.

“I wondered how many miles those shoes have walked. I wondered what they’d walked through. Blood? Tears? In & out of the countless rooms of the patients she’s cared for? I wondered how many hours they’ve carried her, and all those like her, while they literally save the lives of those we love and hold the hands of the ones who can no longer fight that fight.

But with those shoes propped up in that chair, phone in her lap, I got the chance to take care of her (even if it was just for a few hours) and I felt extremely honored to take care of such a hardworking, inspiring woman I’m so lucky to call my friend.”

The rest of her message was meant to express gratitude towards other unsung heroes like her nurse friend. Ashley had a moment of being awestruck because not only was her client resting from a hectic work shift, but in between leaving her job and coming straight to the salon, the woman grabbed Ashley some breakfast too. Selfless 24/7!

Ashley’s message struck a chord with others, and her heartwarming post went viral, being liked and shared thousands of times on Facebook. Commenters included patients, nurses, and others who have family in the field, sharing their own love for this caring, hardworking bunch. The love continued with virtual hugs for hairstylists too, who often play the role of confidant, therapist, and relaxation expert. 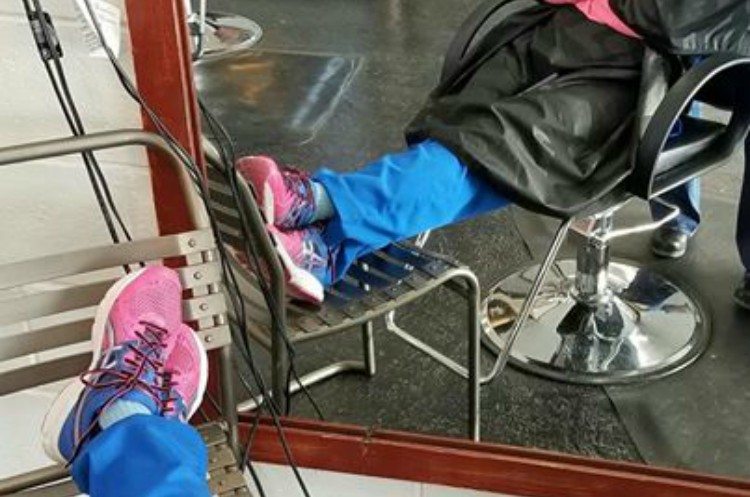 Quietly working behind the scenes and performing their duties, nurses and other medical staff touch lives every day. Ashley’s friend is one example of someone who does amazing things day and night. To top it off, Ashley told The Kansas City Star one more thing about those shoes:

Her client’s husband popped into the salon because their daughter forgot her shoes for track, so the lady took hers off and sent them for her daughter. She left the salon in socks!

Did this story get you in the feels too? Do you know and want to recognize any sweet nurses who have made a difference to you? Share with us in the comments!