She Hard-Boils Eggs 4 Ways. See Which Method Came Out on Top.

How do you generally hard-boil your eggs? However you do it, do you ever notice that your eggs are difficult to peel afterwards? I know sometimes, especially when I make a batch of hard-boiled eggs for deviled eggs, that peeling them can be a true struggle, and I’ll end up with eggs that look like this:

We’ve encountered a lot of hard-boiled egg tips here at Tip Hero. So I thought, “why not test them out to see which one works best, once and for all.” And so, I decided to get in the kitchen and test out the 4 methods that have received the most praise, that the most people swear by: the water-already boiling method, the baking soda method, the steaming method and the oven method. Here’s what I came up with.

Note: With all of these methods, I used the ice water bath method to cool them down. Basically, once the eggs were boiled (or steamed or heated through), I’d plunge them into an ice bath and let them sit for 10 minutes before peeling. 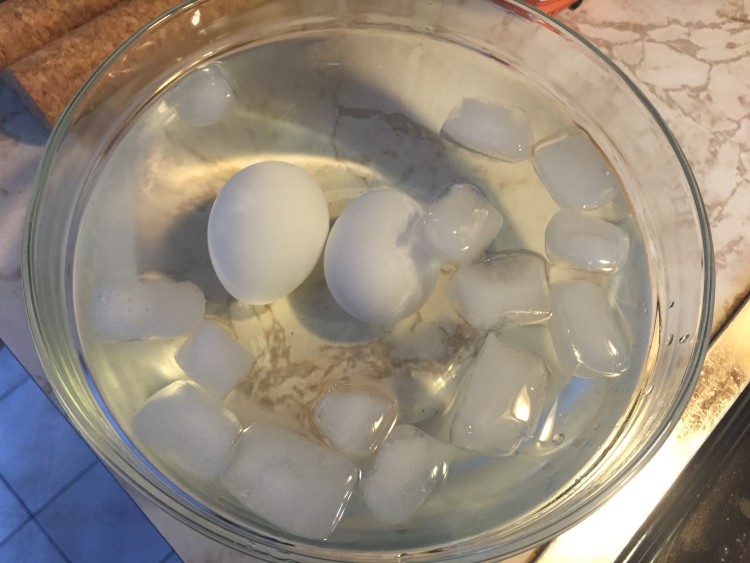 This is the method closest to the one I’ve used on a normal basis. Basically, you boil a pot of water. Then, once the water is boiling, you lower eggs (straight from the fridge) into the water. Once the eggs are in, reduce the heat to a simmer and let the eggs cook for about 12 minutes. Then chill immediately. 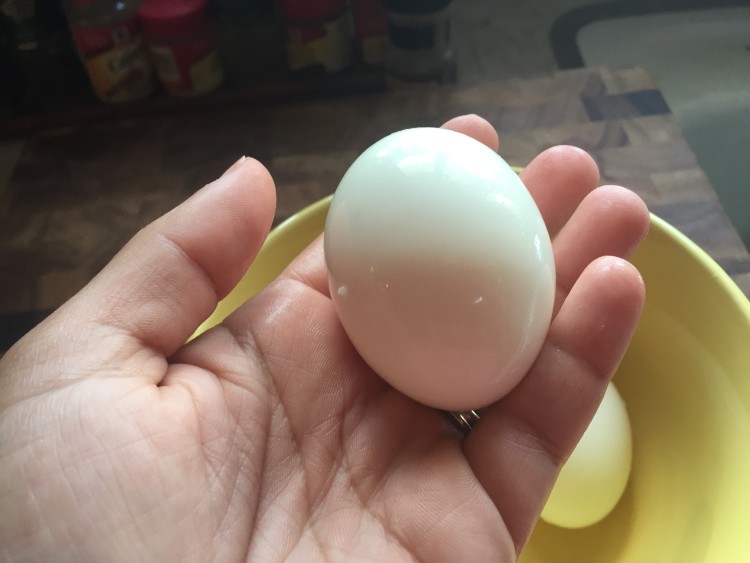 So after that method, here’s what I ended up with: eggs that were very easy to peel. But as you’ll see below, they were a little underdone when cut open. These pretty much would have been perfect soft boiled eggs, or perfect hard-boiled eggs (I’m guessing) with a little more cooking time. 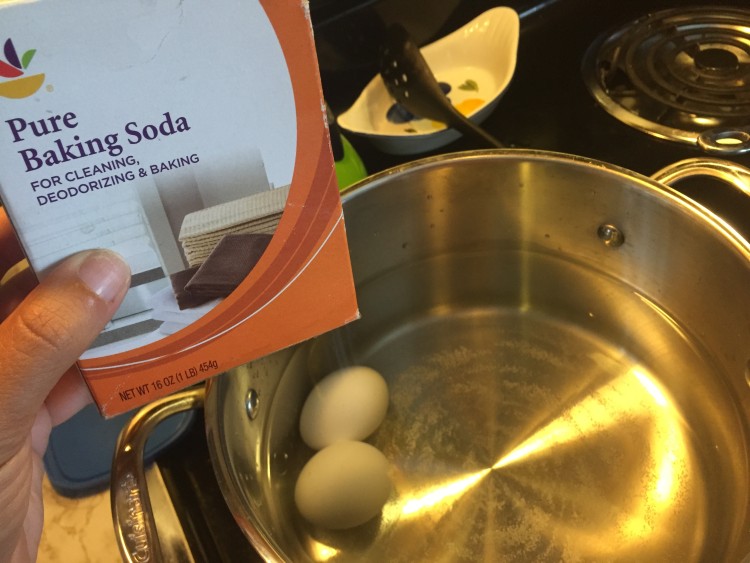 This method was relatively similar to the first, but with two major differences. First, I started the eggs in cold water instead of dunking them into already boiling water. And secondly, I added some baking soda to the water. I’ve read that you should us about 1/2 teaspoon of baking soda per every 3 cups of water. So I used 2 tsp since I boiled my eggs in 12 cups of water.

Once the eggs were in, I let the water come to a vigorous boil. Once that happened, I set the timer to 1 minute. After the minute, I removed the pot from the heat, covered it, and let the eggs sit in the hot water for 10 minutes. 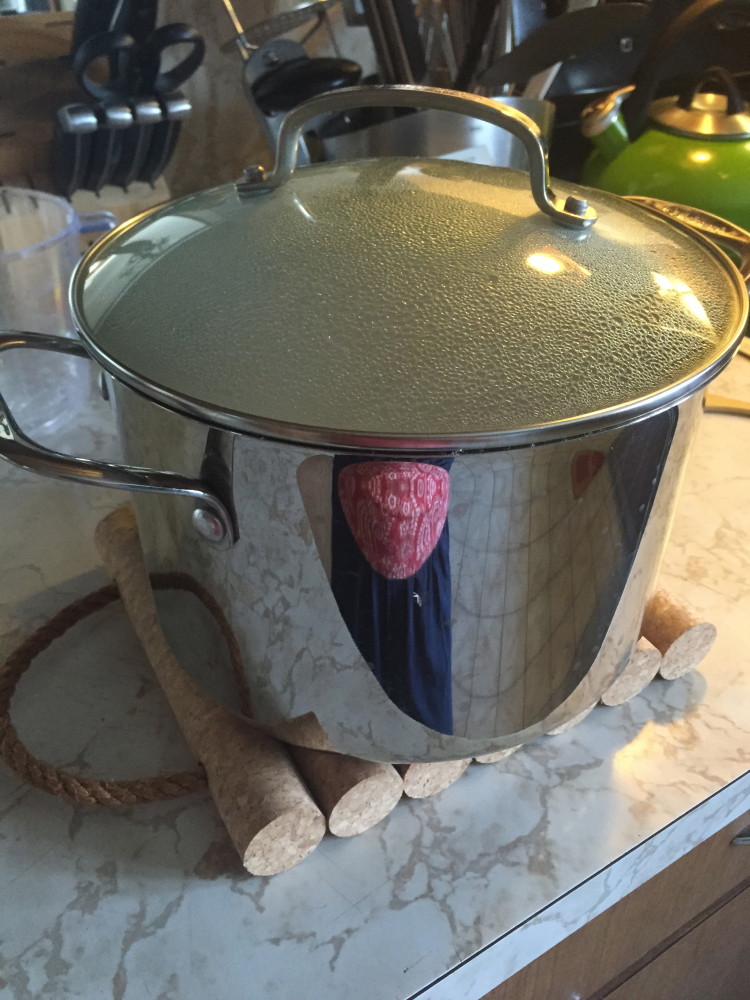 After these chilled in their ice bath, they also peeled pretty beautifully. And the inside was definitely more cooked than the regular method. I honestly didn’t see much of a difference with the baking soda water though as opposed to the regular water though. 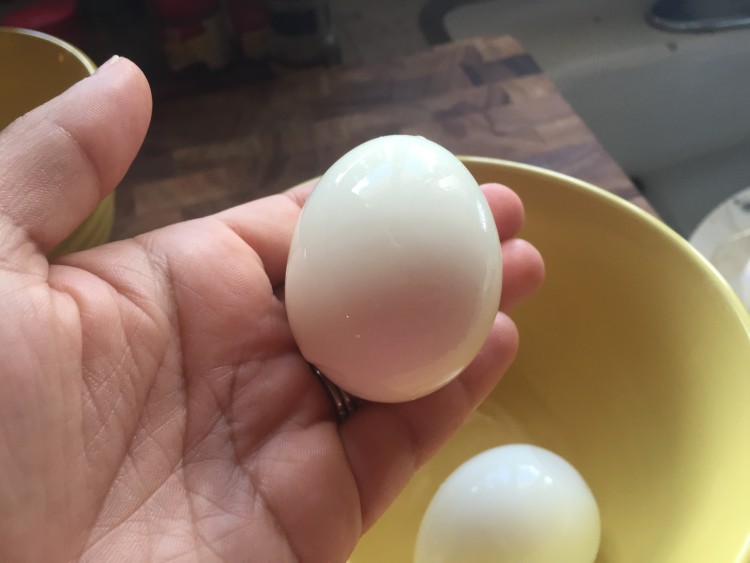 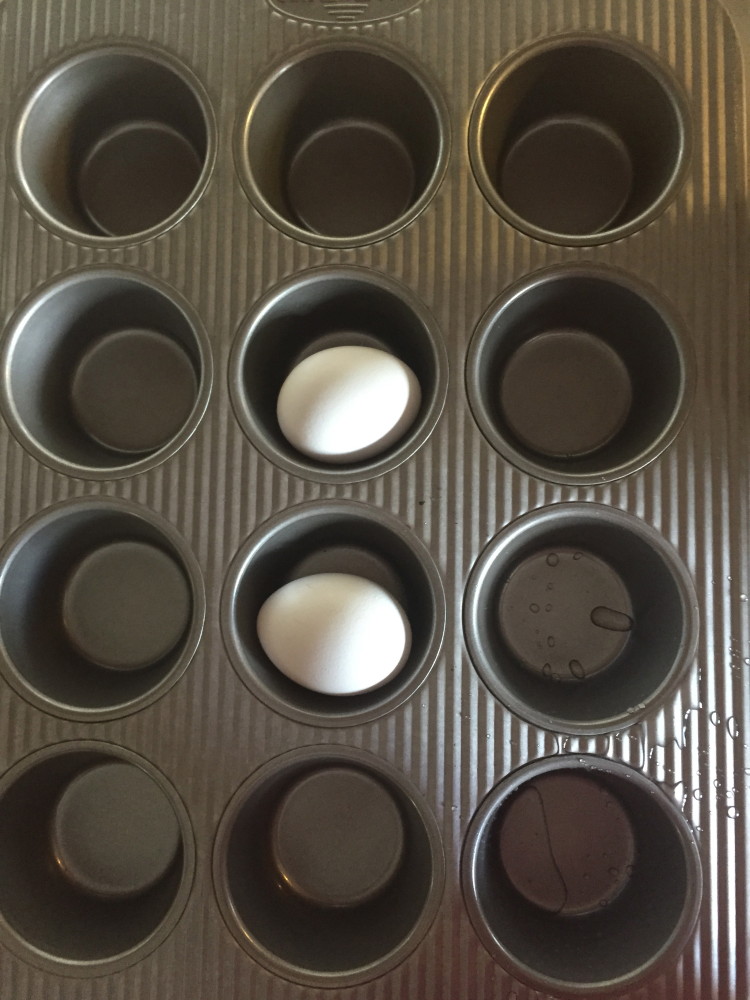 Here’s another method I’ve heard about that I hadn’t tried before now. Basically, you do this: preheat the oven to 350 degrees. Then, grab a muffin tin and add one egg per muffin cup. Bake the eggs in the preheated oven for about 30 minutes, then remove and chill. 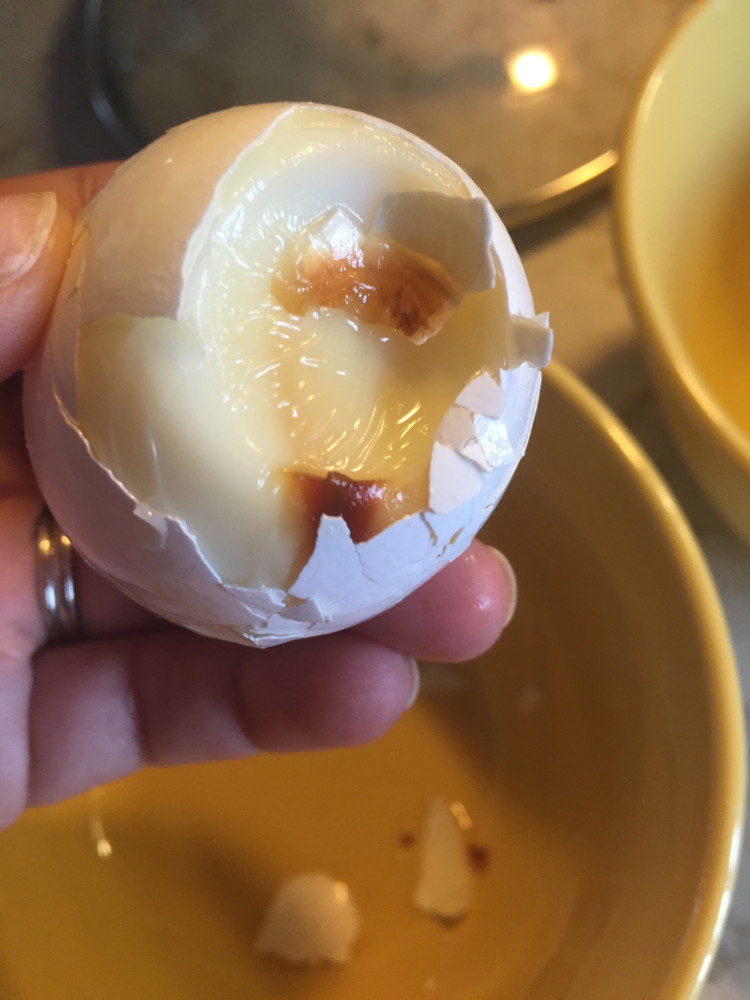 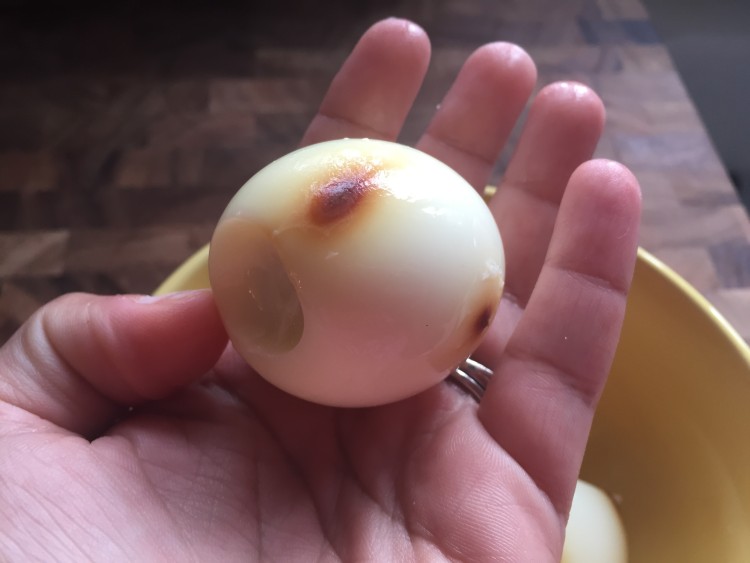 It became clear immediately as I started to peel these eggs that this was my least favorite method. There appeared to be burn marks on the inside of the egg when I peeled it. And the peeled egg that was bright white on all of the other eggs appeared to be slightly yellow on these ones. Maybe they would have turned out better if I had used cupcake liners under the eggs? Or cooked them for less time? 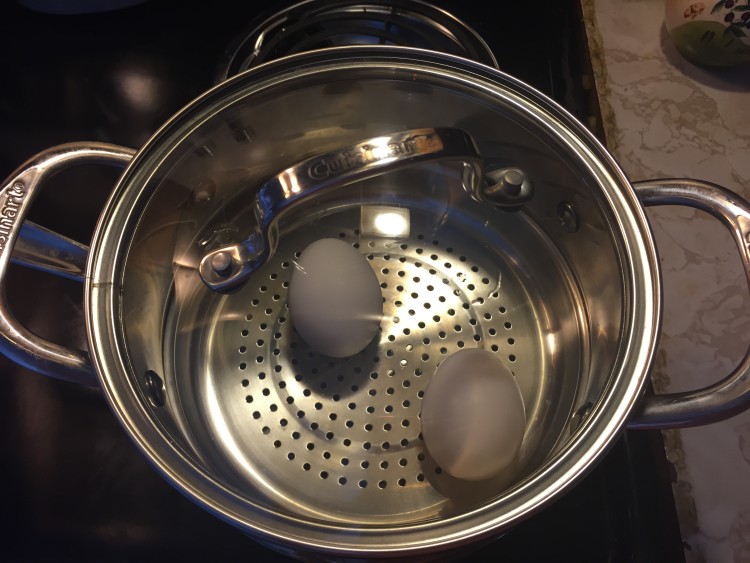 This is also another highly-praised method I came across recently. Here’s how it works: just add about a quart and a half of water in a pan. Then put the eggs in a single layer in a steamer tray. Set the steamer on the pot, then turn on the heat. Cover the pot and bring water to a boil. Once boiling, turn down the heat to a simmer and cook for 20 minutes. Chill eggs immediately. 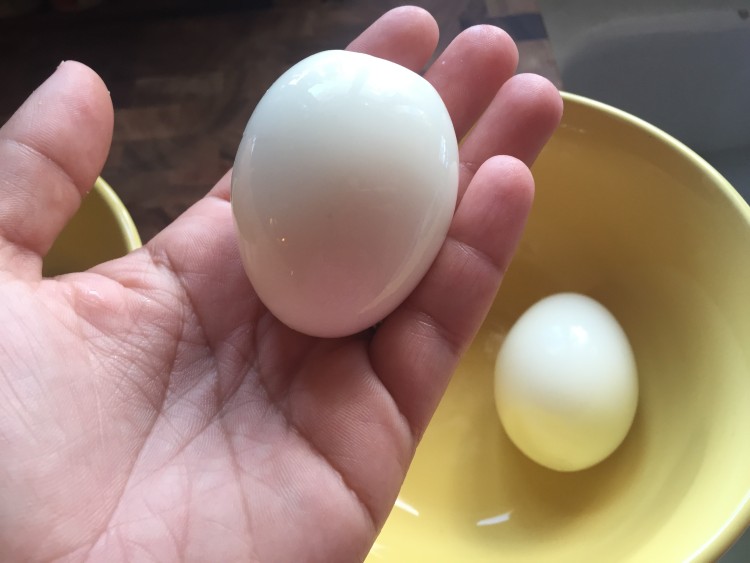 This method also worked very well. The eggs were very easy to peel, and the inside of the eggs were perfectly cooked. 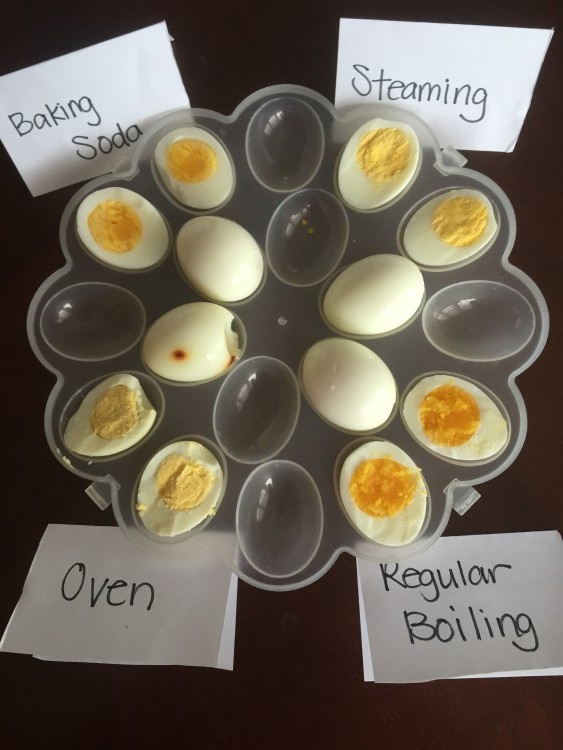 My verdict here is that while it is difficult to pick a winner, it’s easy to pick a loser. The oven method was definitely the worst one. Between the time that it took to cook the eggs (30 minutes, plus the time it took to preheat the oven) and the less-than-desirable way the eggs turned out, this one is a method I don’t think I’ll try again (unless I need to boil more than a dozen eggs at once with the help of several muffin tins).

The other 3 methods worked very well. And I think with a little tweaking on the timing, all 3 could have been cooked perfectly on the inside.

But if I had to choose a winner, I think I’d choose a combination of the first two methods. I’d basically do the cold-start baking soda method without the baking soda, as it seems to include the least actual heat/stove time egg-cellent (sorry, couldn’t resist) results.