Shaggy-Looking Man Is Completely Transformed By A Barber

If you grow your hair out long enough, it’s hard to get up the courage to get a haircut. Your long hair becomes who you are, and cutting it can produce a ton of anxiety.

That’s just how Reddit user named WalterWhiteBoy16 felt. He grew out his long shaggy blonde locks and unruly beard for so long that it truly became a part of him. He had embraced his hippie-like style for years.

Nevertheless, the hair was getting so out of hand that he finally decided it was time to do it. He had to cut his hair. It was just getting too long and it was time for a change. Luckily, he had just found a barber in his city online who he liked, so he took that as a sign.

“I recently moved to a new city and was looking for a barber,” he explained on Reddit. “I came across this photo on Instagram and started scoping out the person who posted it. Coincidentally, it was a barber in the city I had just moved to so I figured I’d pay him a visit.”

And so he did. He told the barber to go crazy—just chop it all off and don’t look back.

While it was no easy feat to commit to the haircut, he’s so glad he did because the results are truly amazing.. Dare we even mind-blowing? His before and after photos are so incredible that his post went viral.

“My barber is a goddamn hero,” he wrote on Reddit, along with these photos. 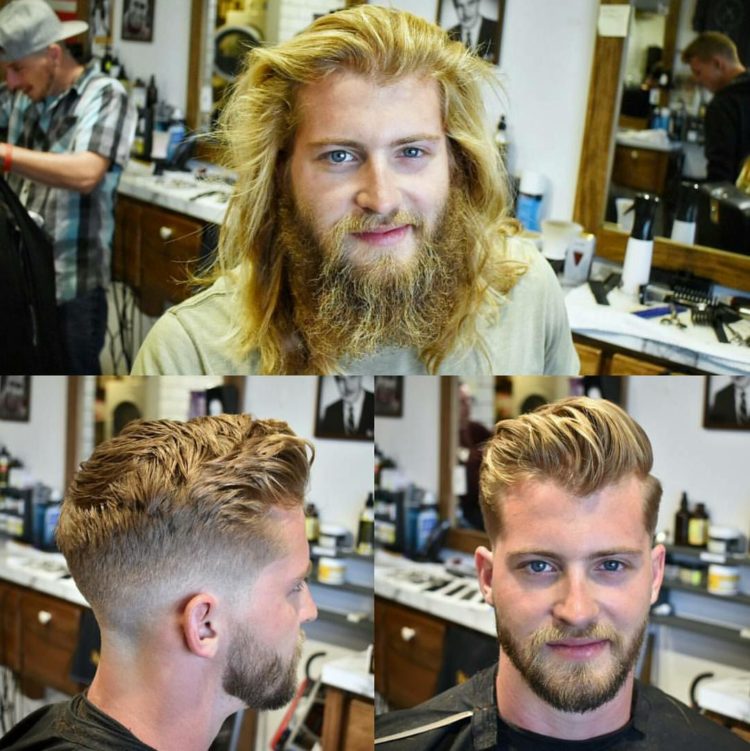 We’ve got to agree with him there! Doesn’t he look like a totally new man? While he did stick with a shorter beard, we think it totally suits him. Dang!

Comments flooded the Reddit feed with the same thoughts.

“If only we could all go from hippie to model after a haircut,” someone wrote.

“I’m a fan of both longer hair and beards but you definitely look great cleaned up. Amazing results,” someone else wrote.

“You scrubbed up real nice though bro, I’m not even joking. You sincerely look like a fashion catalog model in the ‘after’ pics. Best of luck with the new look,” another commenter posted.

Okay, so we’ve got to know: Who is this magical barber? He goes by “fleetwoodthebarber” on Instagram, and the owner of WHITE STAG Barber Co. in Springfield, MO, which specializes in self care for men. From drastic haircuts like this one to facial treatments to nose waxing (for real), White Stag takes male grooming to the next level.

The barber’s work is seriously jaw dropping. He posted a video of WalterWhiteBoy16’s transformation. Check it out below!

What do you think of this haircut transformation? Did you ever think something as simple as removing some hair could make this much of a difference in the way we look?