When You See a Scarf on a Tree, Here’s Why

Don’t you just love a good, heartwarming pay-it-forward story? When times are tough, we often see strangers helping strangers in need for the simple fact that it feels good. Help may come through one individual or through a group, but one gesture can make all the difference.

For the past couple of winters, there’s been a quiet movement to keep the homeless warm when temperatures drop. At night, shelters are often full and many people have no indoor place to sleep. Layering and bundling up is necessary to battle hypothermia and frostbite. Where can clothes be found?

You may have seen scarves tied to tree trunks around your community and wondering what they signify. Instead of holding some symbolic meaning, they’re being left for those in need with a tag that says to take one. Donated by knitters, crochet enthusiasts, and other good Samaritans, the scarves are finding their way to those who could use them the most: the homeless and others in need! 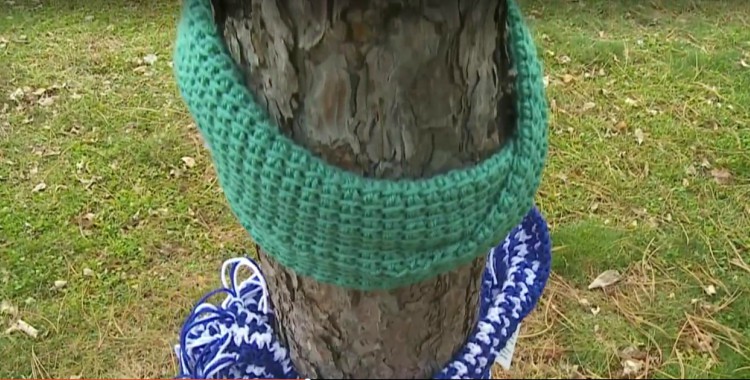 Cities all over the U.S., the U.K and Canada have seen an uptick in scarves hanging on lampposts and trees. On social media, a Facebook group called “Chase the Chill” initially began the movement in Easton, Pennsylvania around 2010. Founder Susan Huxley wanted to find a dignified way to offer charity to the homeless, so she began the handcrafting project. The beautiful knits offer people warmth and an assortment to choose from.

Other Chase the Chill groups have popped up all over, including Georgia, Boston, and Canada. Dubbed yarn bombing, the groups knit and crochet scarves, hats, and mittens, leaving them in public places for the taking. A little card attached to the item typically has a note written on it that reads:

“This scarf is not lost. If you are cold and need to keep warm, it is for you…”

Sadly, the founder of Chase the Chill, Ms. Huxley, passed away in June 2016. What a wonderful legacy she left behind! The idea has caught on with individuals and groups alike looking to bring some warmth to their fellow neighbors. Churches, craft bloggers, and even cannabis clubs have launched efforts around the world where the winters are unbearably cold.

One woman was inspired to create scarves over the course of one year after recovering from a heart transplant. Elizabeth Sammons crocheted hundreds of them by herself, and by the time she and a crew of volunteers hit the streets of St. Paul, Minnesota, they had over 1,000. Their group was able to leave the scarves in 21 parks throughout the community.

If you have talents in knitting or crocheting, this can be a wonderful way for you spread some kindness around your town. Should your talents lie in organizing instead, you can collect donations from the locals through places like schools, grocery stores, or libraries. Children and adults who need them will appreciate your efforts.

Have you seen scarves wrapped around the trees in your city? Would you start a drive like this in your community?