Phones are one of those things that are constantly evolving. We started with a rotary dial phone, which morphed into cord house phones. Cell phones used to be flip phones and now we basically hold an entire computer in the palm of our hands.

The history of the phone is truly crazy, and it’s about to get even crazier. There’s an entirely new mobile platform that we’re likely all going to have to get used to, and it’s called the foldable phone.

The foldable phone is essentially just what it sounds like—a phone that can fold in half so that it can fit into your pocket more easily. Cue jaw drop.

Recently unveiled by Samsung and called the “Infinity Flex Display,” the phone itself is about the size of a tablet, and folds right in half, just like a sheet of paper does, for easy carrying. It’s said that production will begin sometime in 2019. This is the first time ever that we’ve seen a phone be able to maneuver in such a way.

So how the heck does this cool piece of technology actually work? Samsung uses two different separate displays, one inside and one on the outside. The interior display folds in half to reveal the second display, called the “cover display,” which is on the outside of the phone. Samsung referred to the ‘disguise’—the device that’s hiding inside—“stunning.”

Obviously the material isn’t glass since that can’t bend. Instead, Samsung built the bendable phone out of a “flexible and tough” polymer that’s able to fold hundreds of thousands of times and not lose its strength.

Additionally, a new kind of adhesive is used on both the displays that makes it as flexible as it is. When you hold the new innovative device in your hand, you might notice it feels different than what we’re used to due to the new materials used. 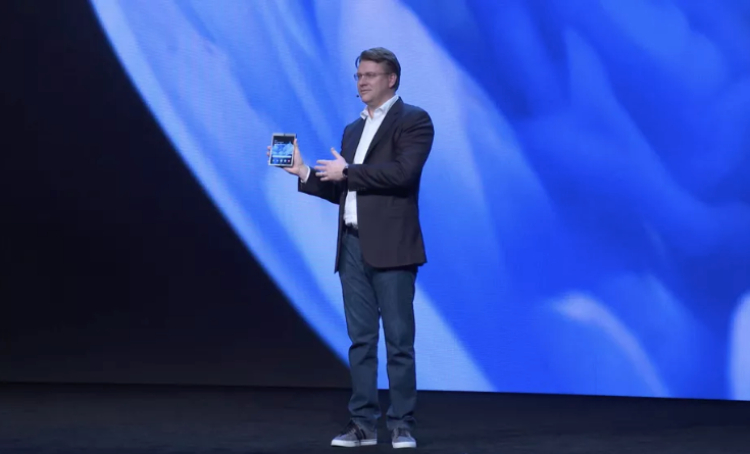 So now the burning question is: Are foldable phones going to catch on, or are they going to make people raise an eyebrow and move on?

“Few are debating ‘if’ foldable or rollable mobile displays are the future of smartphones, the only question is when and by whom,” says Patrick Moorhead, an industry analyst at Moor Insights and former AMD executive. “The core benefit of a foldable smartphone is that the user can have the benefit of a larger display but can still fit it into their pocket, coat, or purse.”

“This isn’t just a concept,” says Justin Denison, SVP of mobile product marketing at Samsung. “The breakthroughs we’ve made in display materials have been matched by breakthroughs in manufacturing. As a result, we’ll be ready to start mass production in the coming months.”

To watch Samsung debut the Infinity Flex display for foldable smartphones onstage at the Samsung Developer Conference, check out the video below.