Having a dog is the best—all dog owners know that. You always have someone to greet you happily at the door when you get home, play fetch with, and be there for you to wipe (or lick) your tears.

That doesn’t mean that having a dog doesn’t come with its frustrations too. One of the biggest is when you’re going away and need to find someone to watch the dog. Not only can it be stressful to find a place you trust and are comfortable leaving your furry friend, but it can be costly.

That said, the person watching your dog deserves a pretty fair wage. In fact, a survey by Pet Sitters International (PSI), an educational association for professional pet sitters, found that pet sitters earned an average of $48,635 a year in 2010.

Watching after a pet can be taxing, especially if your dog requires some kind of special need. So it was a little shocking when one woman demanded that her pet sitter watch her diabetic dog named Junie for just $110 over the course of eight days. 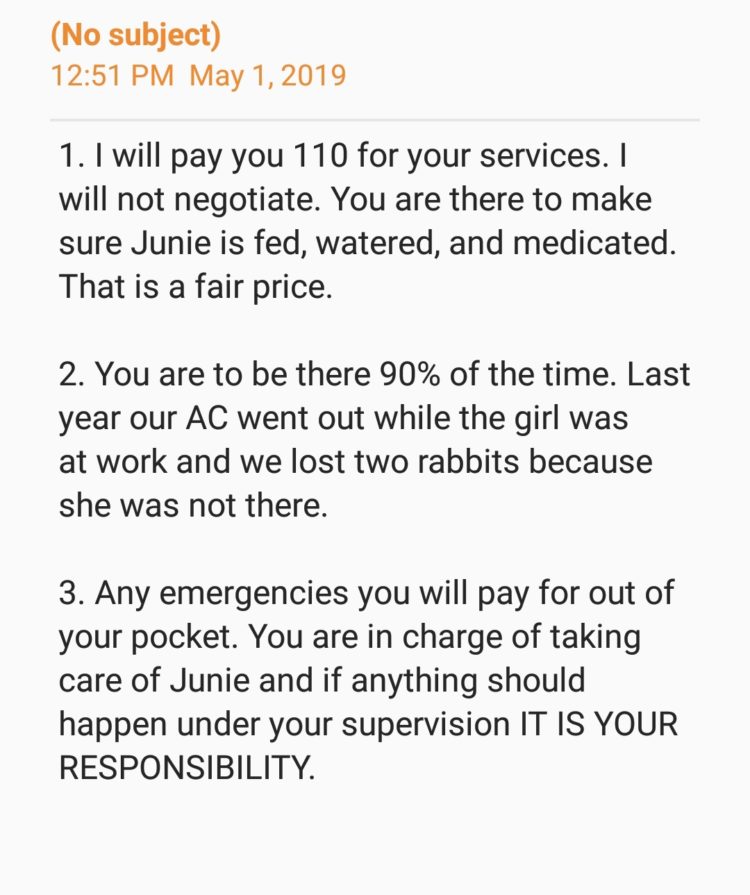 The woman can be seen arguing with the dog sitter in a text message exchange that’s gaining attention for being unreasonable and downright rude. The woman starts off telling the sitter that she wants to “make some things abundantly clear” and that $110 is her final offer. “I will not negotiate,” she says.

There’s more: Before the sitter can so much as respond, she goes on to demand exactly the kind of services she expects. “You are there to make sure Junie is fed, watered, and medicated. That is a fair price.”

The woman then tells the sitter the precise amount of time she needs to care for Junie: “You are to be there 90% of the time,” she says, adding that last year she had someone watching her two rabbits but they after the AC went out and the girl watching them was at work, the rabbits didn’t survive.

That’s not all. The woman tells the sitter that she must pay for any emergencies that come up out of her own pocket, and it’s completely her responsibility, no one else’s. The woman was also warned that there would be cameras in the house, so her every move would essentially be watched—“No friends over, parties, or anything of the like,” the woman tells her. 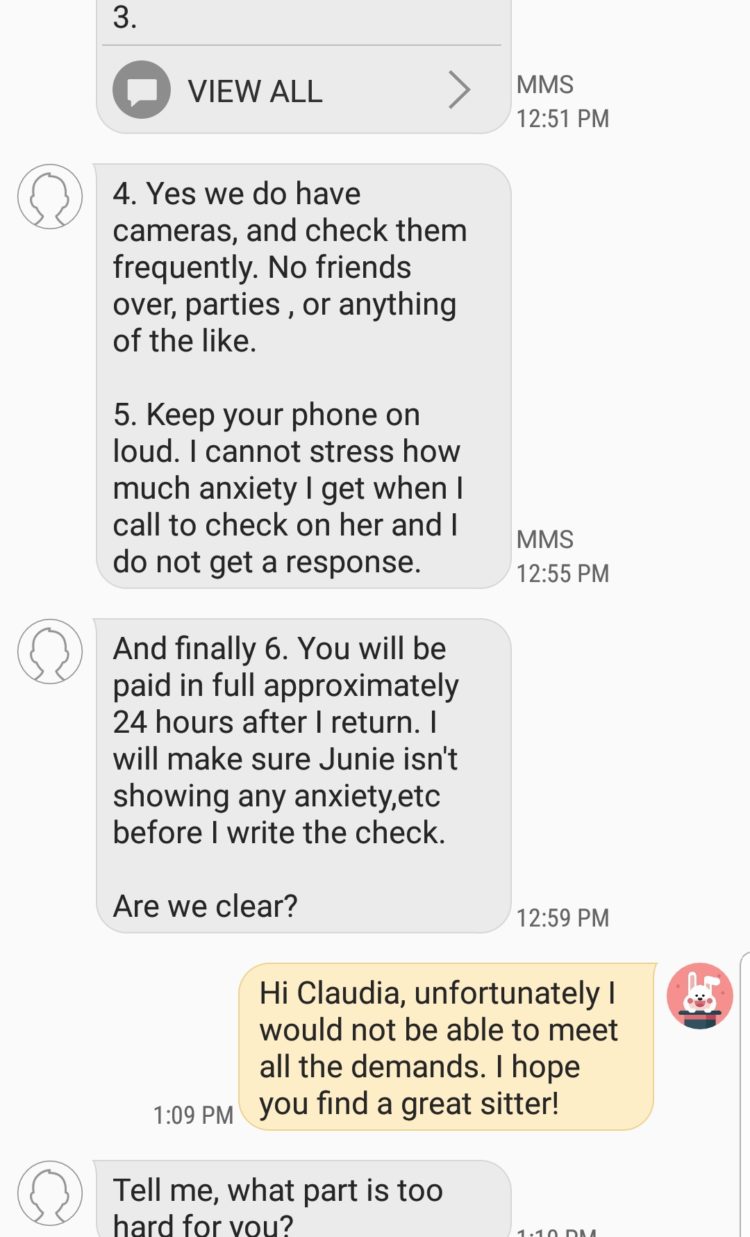 “Keep your phone on loud,” she continues to demand. “I cannot stress how much anxiety I get when I call to check on her and I do not get a response.”

The last rule this woman has is that the sitter will only be paid in full—her whopping $110 reward for all of this—once she returns from her trip, and she’ll have to make sure Junie isn’t showing any anxiety before she writes the check.

The job really doesn’t sound very enticing, so the sitter declined, and in the nicest way possible: “Unfortunately I would not be able to meet all the demands. I hope you find a great sitter!” she wrote.

The woman refuses to let it go—“Tell me, what part is too hard for you?” she asks.

Only then did the dog being diabetic come into play—this woman wasn’t even going to let her in on that fact!

To read what happens next, as well as the entire text exchange, check out the original threat here.

Can you believe how demanding this woman was? What would you have done if you encountered these kinds of requests?