After Mom Finds Out Her Boys Were Being Rude To The Bus Driver, She Comes Up With A Clever Punishment

The school bus can be a wild place sometimes. You’ll find kids who are rambunctious, some who are quiet, and some who like to test the limits of good decorum. Many times, those are the ones who fly right past those limits.

When one mom found out her sons were acting up on the bus, she came up with a novel way to address it. Jenn Brown received a call from their elementary school that her two boys were misbehaving and being rude to the bus driver. She was not happy about it and let her kids know.

The next day, she told them to bundle up because they would be walking to school as their punishment. In the middle of the Canadian winter, the two would have to make the 4 ½ -mile trek to school without the comfort of a heated bus.

To add to it, Brown also constructed a cardboard sign that read, “BEING BAD AND RUDE TO BUS DRIVER. MOM’S MAKING US WALK.”

Off they went to school – accompanied by their mom – where cars honked at them along the way. The family lives in a small Ontario town where the roads are not as hectic as a larger community. Brown snapped a picture of them holding the sign and captioned the photo, posting it on Facebook:

“My boys have been bad for their bus driver, and I got a call from the school yesterday that drew a line for me! So this morning we did a 7 km (4.5 mile) walk to show them what every day will be like for them when they get kicked off the bus. S*** just got real for them. Two hours later they made it!”

After posting the picture on Facebook, Brown received numerous comments showing support for her actions. Many praised her for not ignoring their behavior and teaching them a lesson. But a handful of commenters were concerned over the mom using social media to shame her children. 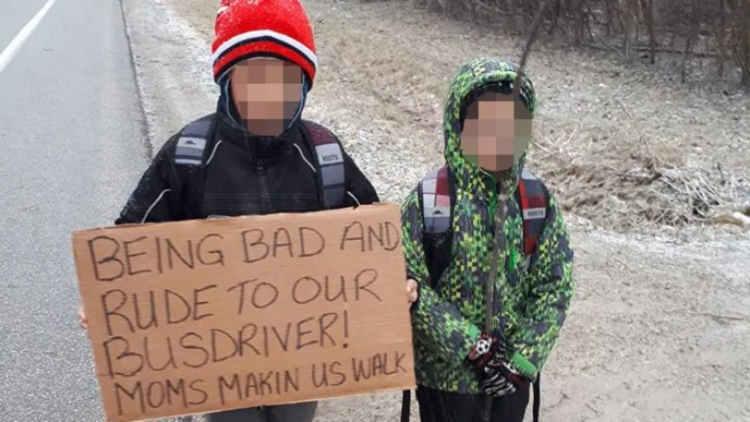 Brown told CBC that the criticism she received prompted her to remove the post and contact the local children’s services agency – Children’s Aid Society – to explain her move. Details weren’t discussed, but it was noted that the agency did not find any legal wrongdoing or safety threats on the mother’s part.

A manager for the organization did state that shaming kids on social media is not really an effective parenting tool and may actually backfire when parents are trying to teach good behavior. Parent shaming is nothing new, but taking it to social media has caused some controversy. Your thoughts?

Although the punishment worked for the older son, Brown shared that her younger son needed another day to learn his lesson. Outside of the social media angle, these brothers seemed to have learned from their mistakes. Who wants to walk miles in the Canadian winter? Hear more about this story by watching the video below.

What do you think of this mom’s punishment idea? Would you or have you done something similar? Is there another way you would have addressed this behavior?