Does anyone remember the 2011 season of Britain’s Got Talent? Here’s all you need to remember: child singer Ronan Parke blew audiences away with his big voice and the season ended in surprising (and slightly entertaining) scandal. Parke’s biggest moment on the BGT stage? His moving cover of Kelley Clarkson’s “Because of You.”

When you see this adorable and well-dressed little boy standing on stage, you’re probably a little confused. Especially if you’ve never Ronan sing. But just wait until he opens his mouth.

The stage is set so dramatically; there’s a layer of fog around his feet and white/blue lighting from behind which makes the little boy glow like an angel. And, as it turns out, that heavenly vibe is exactly what the Britain’s Got Talent producers had in mind.

Ronan begins his song, and right off the bat you can tell he’s extremely talented. For such a young kid, he has a very well-controlled and polished voice, a lovely vibrato, and a tremendously powerful belt for such a little guy! And despite his age, he sings this song with so much passion, that it gives us chills! Especially during the emotionally charged chorus, he really nails it.

Then, out of nowhere, a choir comes on stage behind the young singer! They back him up through the rest of the song as he belts out the leading line, really creating this incredible performance. 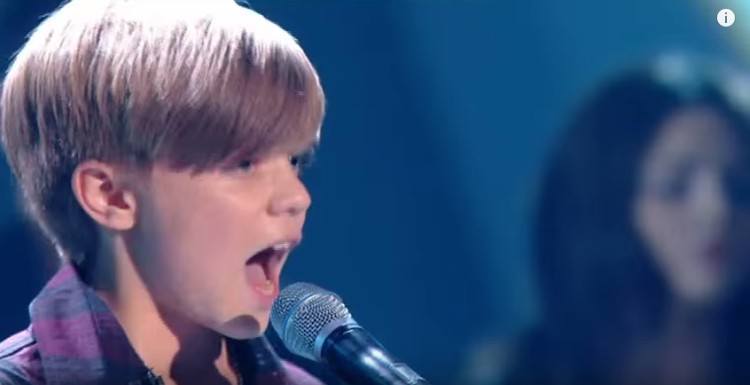 SF Globe
When he and his back-up choir are finished, the crowd bursts into an amazed applause! The judges, too, look baffled by how amazing the entire number was; the effects, the back-up singers, and of course, Ronan’s powerhouse voice.

They’re so impressed that they’re certain Ronan will win the competition based on this performance. Judge David Hasselhoff even said, “Ronan, I actually wrote down, ‘Ronan will win this competition if he nails it.’ And, buddy, you nailed it.” The young contestant is beaming and tearing up by the end, obviously overwhelmed by the positive response from both the audience and the judges.

But despite the fact that Ronan nailed his heavenly performance and “should” have been the winner of the competition, at least according to Hasselhoff, something surprising was about to occur.

Just before the finale of the season, an unkind article about Parke surfaced on the internet. The anonymously written article claimed that Parke previously signed with judge Simon Cowell’s record label and was being professionally groomed for the competition. No proof of the allegations ever materialized, but it prompted Cowell address the controversy prior to Parke’s final performance.

“This is a deliberate smear campaign, and it is my job to ensure that, whoever this liar is, is exposed and this kid is treated in the same way as everyone else,” Cowell said.
It’s unclear if this “smear campaign” played any part in Parke’s placing at the end of the show, which sadly, was second place behind Jai McDowell. However, Daily Mail reported that the young singer still made out fine; Parke was signed to a record label and received a £1 million recording contract.
What do you think of this angelic performance and the scandal to follow? Did Parke deserve to win? Share your thoughts in the comments section below.