Have you ever felt pressure to leave a tip at a restaurant that was way more than you were comfortable leaving? Are you a regular at a spot that charges a minimum gratuity? Not everyone likes this system, and it’s got nothing to do with being a cheapskate.

Making headlines again are the woes of our American tipping culture. This time, it’s resulted in a lawsuit. Before we jump into the story and how it relates to you, let’s think about something for a moment. How many of you are old enough to remember when an acceptable tip was 15%? That was that.

Nowadays, most hardworking servers don’t even make minimum wage, so our tips understandably help to support them. To bolster that, some restaurants are printing suggestions on receipts for how much one should tip. Some of you have seen them. They are tipping guides for the 21st century, and they look a little something like this:

So, basically, 15% is the standard for poor to fair service, 18-20% for average, and 22% (25% for some businesses) for excellent service. Marcel Goldman is challenging the “suggested gratuity” practice at The Cheesecake Factory restaurants based on his experience with a bill that was $38.50.

In his lawsuit, he claims that the $38.50 represented his portion of a split bill, but the receipt’s suggestion resulted in him paying a 40% tip. This is because the tip amounts were calculated based on the total instead of his portion.

You do the math. What’s 20% of $38.50? Mm hmm. $7.70. The amount was doubled! The case was filed as a class action suit to address the issue with the entire chain. Listen to the video to hear the restaurant’s response about the practice.

Because this story’s been getting attention, others are taking notice of similar practices. Where it gets sticky is when the restaurant’s math is off. Way off.

Many people take the receipt’s suggested gratuity at face value and happily pay it. It saves time from whipping out your phone to calculate it or doing the math in your head. Or you go with it because you simply appreciated the server. Just look at this example posted on social media: 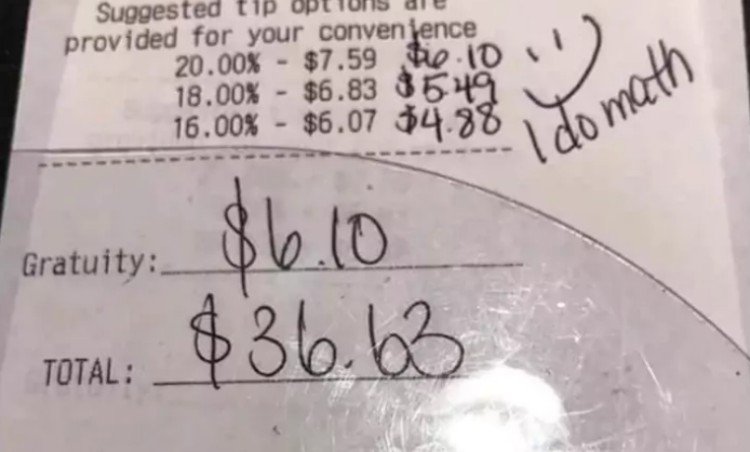 If you’ve been relying on printed suggestions instead of your own math skills, then it may be time for a change. While it’s up to you what percentage you want to use, run the numbers yourself.

Be careful when splitting the bill so that each person isn’t paying double the recommended amount. That could wind up being the cost of another meal!

Should you decide to forgo a credit card tip, be sure to mark a line through the tip space on your receipt so no one can write one in and charge you for it. Sorry, it’s a slick world we’re living in.

Are you rolling with suggested tips or do you do your own math? What do you think of gratuities? Have you noticed bad math at some dining establishments?