This Ewe Was in Need of a Rescue

Imagine taking a tumble. Next you become stuck in water or quicksand up to your shoulders, and your two young children are standing there unable to help. You’re scared, tired, hungry, and have lost track of time.

Sound like a nightmare? If it does for you, then it probably feels the same way to animals. The video below was shot this past May in South Wales in the United Kingdom. A mama sheep was stranded in a river when a couple walked by and happened to see her.

On the way back from a trip to the beach, a woman and her husband Jon noticed the poor ewe and her lambs. Instead of turning a blind eye, Jon decided to climb in the water to try and save it. As Jon removes his shoes, you can see one of the lambs off to the side acting frantic. It’s bleating for help!

Things are tense as he’s trying to figure out the best way to move her. The sheep is quiet, still, and cold. There’s no telling how long she’s been trapped in there. Jon decides he’ll attempt to maneuver her up the embankment. Grabbing her entire body appears to pose a challenge due to her size. Jon first tries to pick her up in one swoop. 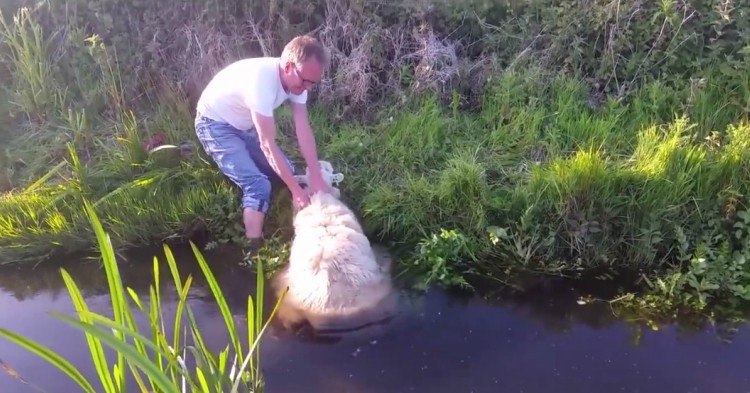 Newsflare
He ends up wrapping his arms around the ewe’s chest to gain some stability. Little by little Jon is able to heave-ho to get her up onto the grass. He stops to rest and catch his breath. It seems she is too weak to assist in her own rescue.

One has to wonder how this sheep wound up in this predicament. Once out of the water and on land, the ewe remains quiet. Not a peep from the sheep. Though Jon is obviously exhausted, he continues to move her until she’s on higher ground. Watch the video to see how things end up before he trying to move her.

What you don’t get to see on camera is that Jon and his wife found the farmer who owns the sheep. He came and picked her up in his tractor and took her home. Since she was suffering from being cold, he put her under some lamps overnight. By the next day, she made a full recovery and was happy to see her babies again!

Who knows what would have happened if this kind couple didn’t stop to help? While we don’t know how long the sheep was trapped in this scary situation, it was long enough to drain her energy and body heat. Poor thing!

Sometimes animals in distress don’t require emergency crews, but just the helping hand of a passing stranger. In this case – bare hands. It’s amazing what Jon did without any equipment to pull that hefty ewe to safety. How we love happy endings.

What do you think of this rescue? Were you ever in the right place at the right time to help an animal in need? Did you witness an intense animal rescue like this one? Tell us in the comments!