Sometimes bus drivers get a bad rap. Some people might think that they have an easy job. After all, they just drive on the same simple route every day, and chauffeur people to and from different destinations.

Well, not quite. One bus driver in Milwaukee recently changed the game for stigmatized bus drivers when a video went viral of him helping one of his regulars in such a heartwarming and caring way.

Bus driver Thaddeus Turner noticed that there was some pretty heavy road construction going on, which caused him to have to alter his standard route a bit. This caused one of his regular passengers, Gene Hubbard, to have to cross the street at his stop.

You see, Gene is legally blind. He lost his eyesight to diabetes a few years back, and, though he says he doesn’t let it slow him down, there are, of course, some limitations he faces from time to time, and this was one of them.

Because of the construction and cars whizzing by, it would’ve been pretty dangerous for Gene to cross the street without being able to see well.

When Thaddeus dropped Gene off, though he was at the end of his route and in the middle of traffic, he stopped his bus and got out to help escort Gene across the street. 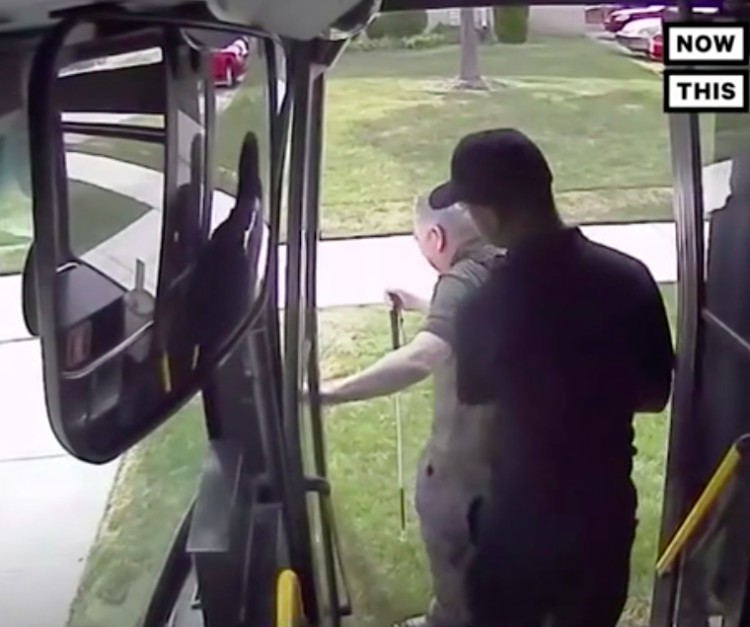 “I knew I had the traffic behind me stopped, because it’s only one-way through there. My concern was getting him across from the opposite direction,” Thaddeus said. “The route was barricaded—it was rough for me as a driver, I can only imagine how rough it was for him.”

Since Gene can’t drive, he’s taken his fair share of bus rides—he’s even taken the bus to work every day for 20 straight years—and says that he finds bus drivers are usually very catering to his needs.

“I just can’t say enough about all the bus drivers,” Gene said. “If I don’t have a regular locating point to start from, I may as well be in the middle of the ocean.”

Surveillance video from the bus documented Thaddeus grabbing Gene’s arm and helping him across the street and through the traffic.

The Milwaukee County Transit System uses security footage on buses to highlight acts of kindness— the only transit system in the world to do so.

Thaddeus said he helped Gene across the street without even a second thought, no questions asked. We love that there are bus drivers out there who genuinely care about their passengers, and aren’t just trying to get through the work day.

To see the video footage of this kind, genuine act, and hear more about this story, check out the video below!

What do you think of this good deed that Thaddeus did for this blind man on his route? Have you ever had a bus driver go above and beyond his work?