Here at TipHero, we’re positively crazy about twins! So, to share in our obsession with all things double, we’ve supplied you with quite a few stories of incredible twins over the years– from mixed race sisters who look nothing alike, to a harrowing tale of a duo that was separated by birth only to be reunited 78 years later, to…well, just a ton of REALLY cute twins!

But warm and fuzzy tales aside, it’s important to note that some of these dashing duos are slightly more impressive than others…

Meet Casey Saunders, the radiant mother pictured at the top of the post. The 27-year-old Colorado resident just did something nearly impossible– she gave birth to her SECOND set of identical twins! Yep, she has a set of twin boys and now, a set of twin girls. Amazing, right?

Well, what’s even more amazing about this story is that Saunders’ twin girls, the gorgeous and adorable Maya and Laia actually ended up beating the odds by 10 million!

You see, it’s very rare for a mother to give birth to two sets of identical twins– in fact, the odds of that happening are around 1 in 70,000– but the two sets of doubles aren’t what makes this mom’s story so unreal, it’s the fact that her girls survived the pregnancy.

According to an interview with the Daily Mail, when Saunders went in for her first ultrasound, she learned that the twin girls were both developing inside the same placenta. This rare condition is called monoamniotic monochorionic and it occurs in less than one percent of twin pregnancies.

Unfortunately, the condition, better known by it’s abbreviated, MoMo, usually spells danger for the fetuses. In fact, around 20-percent of MoMo twins pass away by the 24-week mark. Because of this, Saunders had to stay in the hospital for observation as she rounded out her last trimester.

But, in spite of the possible fatal complications, the twin girls came into this world healthy and happy last December. The mother even says that her little ones are “exceeding all expectations.” Isn’t that just great?! 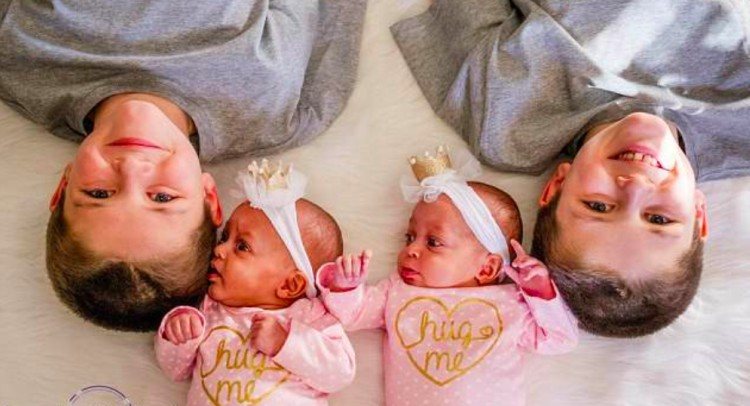 Apparently, Saunders’ sons from a previous relationship, 10-year-olds, Hayden and Cameron are just tickled to have yet another set of twins in the family. “The boys absolutely adore them,” the mom gushed. “They still won’t change diapers but they love to hold them and feed them. It’s heartwarming to see.”

Nowadays, Saunders and her partner Eugene are getting used to life with twins– though this certainly isn’t the first rodeo for the mom. “You fall into a routine after a while and it comes back to you after you’ve done it once,” Saunders said.

Wow! It’s so wonderful to hear that this lucky family is doing so well. You stay lovely, Maya and Laia!

We’d love to hear your thoughts on this improbable family. Do you know anyone who has two sets of identical twins? Did you experience a MoMo pregnancy? If so, would you like to share your story?