They Have the Most Unusual Identical Triplets

When you imagine triplets, you probably picture three adorable babies, all dressed and looking exactly the same. You probably wonder, how are those parents going to cope with three identical kids! It’s a pretty crazy situation, to be sure. But, somehow, not the craziest. Emma Robbins, from the South England city of Bristol, gave birth to a set of healthy triplet boys by Caesarean section at St Michael’s maternity hospital back in 2012. But it may surprise you to hear that this set of triplets were not the only ones Robbins gave birth to on that day. The boys came six minutes after one another, so almost 20 minutes after the first baby boy was born, Robbins’ fourth child entered the world.

That’s right, the Robbins family was blessed with a set of quadruplets that day, named Joshua, Zachary, Rueben, and Samuel. The quadruplets were all born on leap year day, 11 weeks early, and were preparing to turn six months old at the time of the video below. Four years later, the Robbins must have their hands full with a house full of pre-schoolers!

Even at six months, Emma and her husband Martin were pulling their hair out. With four newborns to tend to, the couple had undoubtedly suffered months of sleepless nights. They credited their multitudes of amazing friends for coming to help take care of “the quads,” as they’re called. We’re sure that they couldn’t have raised four healthy boys with out this amazing support system.

But as normal as the boys were with their nightly crying and other newborn activities, there was something different about the quadruplets. Something that boggles doctors to this day. 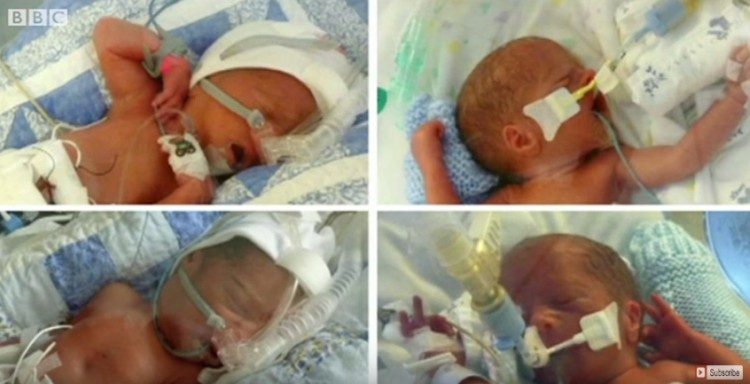 At their birth, two of the babies were believed to be identical – thought to be a one in a million chance. But only a few weeks later, doctors believed that Joshua, Zachary and Rueben could be identical. By the time the six-month mark came around, it was clear that the three boys were, in fact, identical – and that Samuel was not.

Despite their insane luck and the craziness of their new life, Emma and Martin couldn’t be happier with their brood. They have a large four-child stroller to take the boys for a walk, rain or shine – apparently, the boys love the rain more than any other weather! You can see the look on other parents faces as the large family walks through the park, probably thanking their lucky stars or wondering how they do it.

To makes things that much crazier, the Robbins triplets are not the first kids of Emma and Martin. The couple had a little boy, Luke, two and a half years before. They try their hardest to spend as much time with the quad’s older brother as possible. But, needless to say, they have a LOT going on!

What do you think of these adorable, rare quadruplets? Share your thoughts in the comments section below.