For all the negatives people have to say about social media, sites like Facebook really do have the capacity to do some amazing things. More often than not, these social media sites help you connect with and stay in touch with old friends and family members – but in this case, a Facebook photo helped salvage the vision of a little girl. When this proud mom posted a photo of her adorable daughter, it ended up leading to a diagnosis no one saw coming. 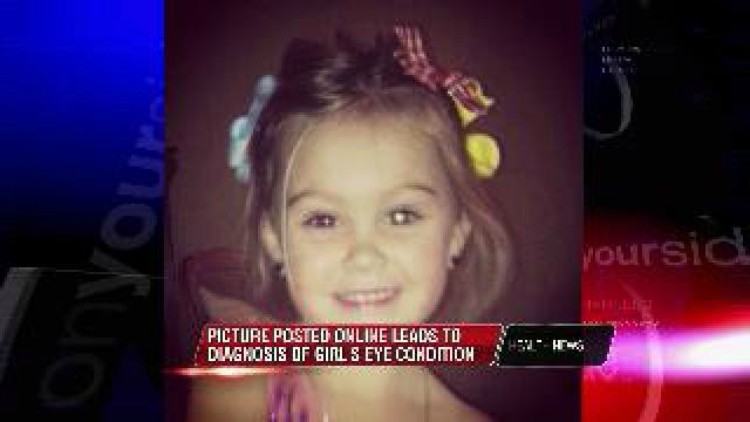 People were pointing out that the glare on Rylee’s left eye didn’t look like a normal camera flash, but something potentially much more serious. When enough commentators chimed in, Tara decided it was worth bringing Rylee to the pediatrician to get it checked out.

After seeing the doctor, he recommended that she see a retina specialist at the Baptist Eye Clinic. It was there that Rylee was diagnosed with Coat’s disease, a rare disease that causes vision loss or blindness in one eye.

Dr. Jorge Calzada with the Charles Retina Institute and Baptist Eye Clinic was one of the specialists that took at look at Rylee and is now tending to her case. Calzada said the earlier they can treat children for Coat’s, the better.

“The significant problem we have with children is that a child won’t say, ‘Mommy, I can’t see out of my right eye.’ It is usually caught in an expected way. When a child recognizes he cannot see or the parent recognizes they cannot see, it’s often because they’ve lost vision in both eyes,” said Dr. Calzada.

Luckily, there is a treatment for Coat’s disease, which Rylee is currently undergoing; she has been getting treatments once a month or so to help lessen or even stop the loss of vision in her left eye. Thanks to the early detection from Tara’s Facebook friends, Rylee’s chances of retaining the vision are much higher than if they caught the disease later in her life.

Which, based on Rylee’s lack of symptoms, may have been years down the road. Her mother told Channel 3 News that there had been no suspicious signs to suggest that Rylee couldn’t see well.

“She didn’t sit close to the TV. She is actually in gymnastics and can walk on the balance beam,” said Taylor.

It goes without saying, then, that Taylor is extremely grateful to her friends and family who pointed out the curious glare on the Facebook photo.

After this incident with the Taylor family, Baptist received a $550,000 grant from the Baptist Memorial Health Care foundation to open its ‘state of the art’ eye clinic at the Women’s Hospital. The eye clinic treats children and even premature babies.

What do you think of this miraculous story? Share your thoughts in the comments section below.