Breast cancer checks can take the form of visits to the doctor’s office or self-exams at home. Following a standard set of instructions, women feel and look for telltale signs when doing checks at home.

But one woman in Georgia experienced a different set of symptoms that we’re not used to checking for with breast cancer. In 2012, Rebecca Hockaday noticed small spots on her chest that resembled freckles. More and more appeared, spreading like a rash and prompting her to see a doctor.

A visit to her dermatologist resulted in a biopsy, and then a referral to Emory’s Winship Cancer Institute in Atlanta, GA. It was there that she received a shocking diagnosis: she had breast cancer. Rebecca had inflammatory breast cancer, a rare form that makes up about 1% of breast cancer cases.

Dr. Mylin Torres, one of Winship’s oncology specialists, explains that this form is very aggressive and hard to diagnose. As with Rebecca, symptoms can manifest like a rash, but it could also look like an infection of the breast. Inflammatory breast cancer can sometimes be overlooked because patients don’t always present with lumps or tumors. 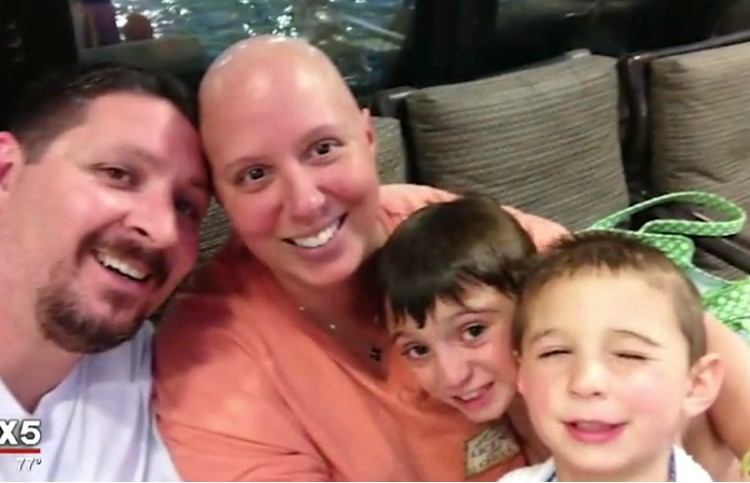 
A mammogram or other routine testing won’t necessarily catch any abnormalities. What happens with inflammatory breast cancer is that cancerous cells block lymph vessels in the breast. Typically, it strikes younger women.

Because it is harder to detect in its early stages, this breast cancer often metastasizes to other parts of the body, including the lymph nodes. Dr. Torres advises that women may notice redness on over a third of the breast, skin that is like an orange peel, or heat in the breast.

The Mayo Clinic also notes these other symptoms of inflammatory breast cancer:

Risk factors are increased for black women or women who are obese. To get a firm diagnosis, imaging tests and biopsies may be ordered.

Rebecca’s cancer spread, and she had chemotherapy and a double mastectomy to treat her cancer. Even after that first round of treatment, it wasn’t over. It spread so much that she needed another round of double radiation which finally seemed to work. After almost a year, a scan showed that her cancer was gone.

Now five years in remission, Rebecca is grateful that she is still here and can share her experience with others who may not know about inflammatory breast cancer. It’s a good thing she didn’t ignore those symptoms! Watch the video to hear Rebecca talk about her experience and her family.

Medical professionals point out that some of these symptoms could also indicate a breast infection, so get checked out if you notice any weird changes in your body. If you feel something is off even though you’ve had a mammogram, talk to your doctor about this rare form of breast cancer.

What do you think of Rebecca’s story? Have you ever heard of inflammatory breast cancer? Tell us in the comments!