Brother Goes to Pay for Sister’s Birthday Cake, but He Find a Strange Note with It

Anyone who has ever endured the loss of a loved one knows that simply getting through the deceased’s birthday is a particularly difficult feat. One grieving Scottsdale mother knows this feeling all too well, but that doesn’t stop her from performing an annual act of kindness to honor her late daughter’s memory.

Every December 27th, 33-year-old Ashley Santi leaves enough money to cover a birthday cake with the cashier of her local bakery. She then hands the cashier a card and tells them to pass it on to the lucky customer who is bringing home a free cake. Santi does this anonymously, with no desire for recognition. Here’s what she wrote in her 2017 card:

In honor of my daughter’s 10th birthday I have chosen your cake to pay for. Each year I do this random act of kindness because I am unable to buy my daughter a cake of her own. Today is her big double digit birthday. Please enjoy your day.

Santi’s daughter, McKenna, died when she was just 9 months old. The infant’s death was a tragic, freak accident; a TV fell on the little girl during a move. Losing a child in such a way is an absolutely terrible reality for any parent to face, but Ashley has found a way to keep McKenna’s memory alive.

Tracking down a Good Samaritan

On December 27 of 2017, Kyle Jauregui went to an Arizona grocery store to retrieve a birthday cake for his younger sister, Madison, but when it came time to settle the bill, he was told that the dessert had “already been paid for.”

Confused, the 23-year-old, opened Ashley Santi’s handwritten card. In an interview with ABC News, Jauregui remembers how he and his family felt upon receiving the gifted cake from the anonymous stranger.

“We were pretty shocked and really grateful,” he recalls. “When we read the card we all just felt an overwhelming amount of love and just felt really blessed.”

Like any good Millennial, Jauregui shared his story on social media, a move that quickly caused the good deed to go viral. All of a sudden, everyone knew about this anonymous mother’s gifted cake to a stranger. 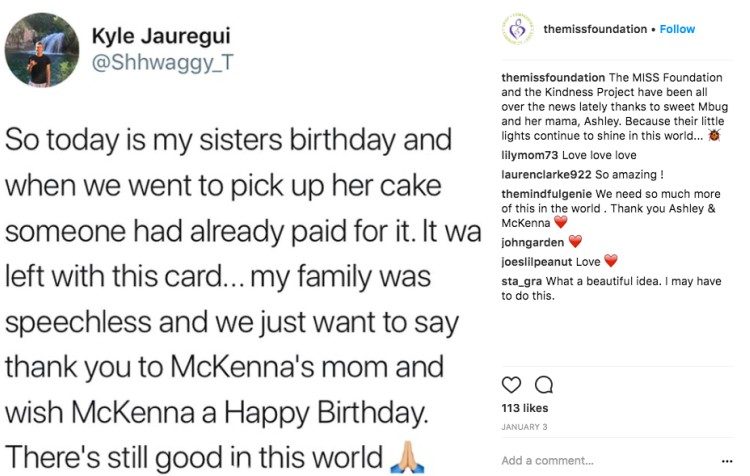 Of course, the Internet wouldn’t be the Internet without people taking it upon themselves to do some detective work. Folks wanted to figure out the identity of the woman who bought the cake and, lucky for them, she had left behind a big clue.

You see, Santi is part of an organization called the MISS Foundation, a nonprofit that aims to help parents of deceased children honor their kids through random acts of kindness. Whenever one of these special parents helps a stranger, they leave behind a paper with the name of the loved one they are honoring. Here’s the one that Santi included in her card: 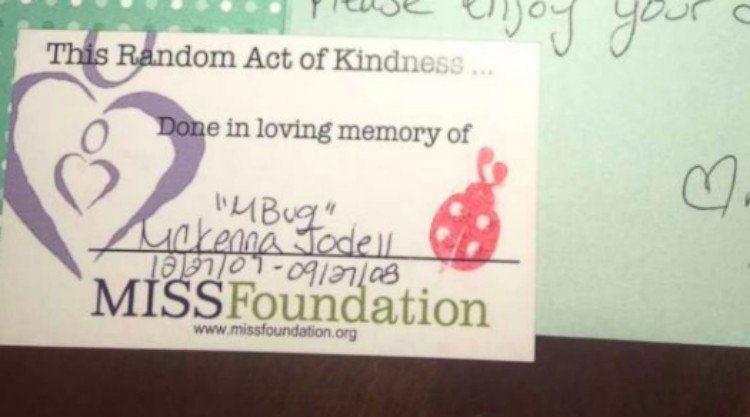 After Jauregui shared the picture of the card on social media, it didn’t take long for these Internet sleuths to find Santi. Santi told ABC News that she had always meant to stay anonymous, but she also said that “it’s kind of neat to see how [the Jaureguis] react.”

The Jaureguis took it upon themselves to contact Santi and all parties spoke over the phone on New Year’s Eve.

In the conversation, the recipient of Santi’s good deed, Madison, was even able to thank the grieving mom for the cake. Madison learned that she was just one year older than the late McKenna, a fact that her brother says she was “overwhelmed” by. 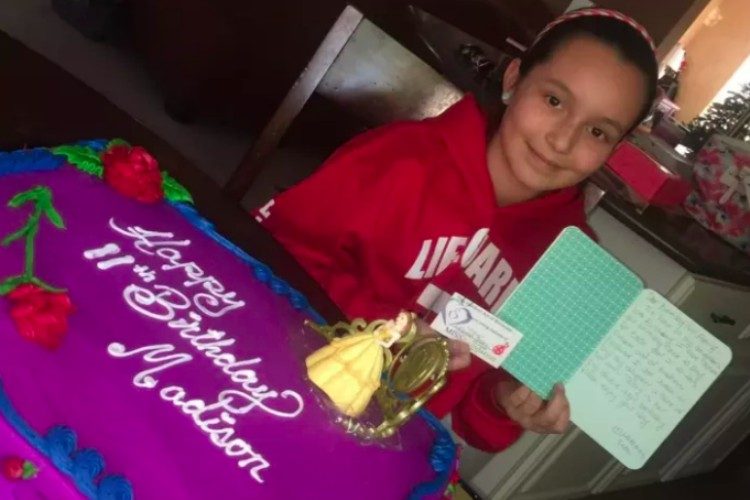 How sweet is that?! It’s so wonderful to hear that this mom has been able to find peace through the act of giving.

We’d love to hear your take on this heartwarming story of loss, love, and generosity. Did this tale strike a chord with you? Are you involved with the MISS Foundation? Do you perform random acts of kindness?