Rainbows: beautiful combinations of sunshine and water that bring happiness and the promise of a new beginning. If we’re lucky, we can spot one (or sometimes two) after a storm. Such gifts from nature can often take on a new meaning for those of us who are facing adversity.

For families who have lost a baby through miscarriage, stillbirth, or infant death, the pain is heart-wrenching. Being able to conceive and birth another child after suffering such a huge tragedy is a blessing. As a way to honor the child (or children) lost and to celebrate an impending birth, the term rainbow baby refers to the tiny miracle born after a loss. For mom Jessica Mahoney, she grieved six miscarriages and is now expecting her second child. 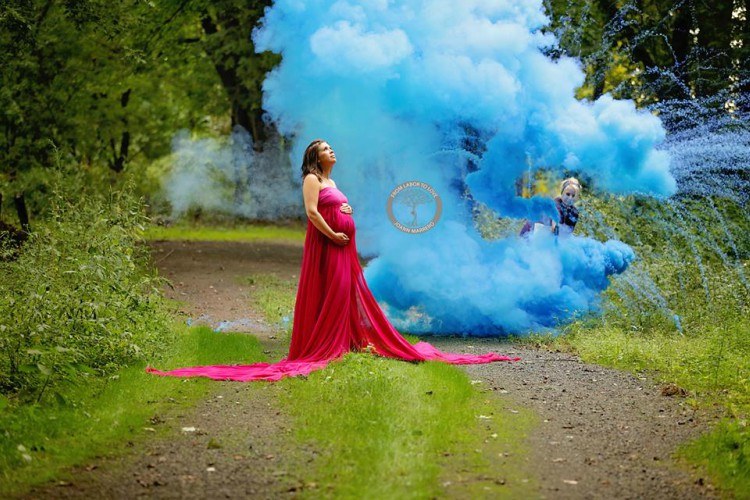 From Labor to Love via Facebook
Jessica and her husband Kevin have one four-year-old son named Corbin. After Corbin, the couple experienced six pregnancy losses. With the seventh pregnancy coming to term (Jessica’s due in November), Kevin wanted to do something to celebrate their rainbow baby and remember those before. It just so happened their neighbor JoAnn Marrero is a photographer who specializes in baby shoots, and the idea for a maternity shoot was brought to life.

Marrero collaborated with another creative photographer, Mary Maloney, and came up with the concept of “rainbow bombs” for the commemorative photo shoot. To create the effect of billowing clouds of rainbow hued smoke, the team set off the colored smoke bombs in the outdoors. Jessica was draped in a beautiful magenta maternity gown, while cradling her full belly in her arms. Several shots were taken as large puffs of colored smoke lit the background.

The most breathtaking photo is the whimsical rainbow backdrop that surrounded Jessica as she looked up towards the sun. With each ray of the rainbow corresponding to each baby, the photo really captures the essence of their celebration. Hubby Kevin and the couple’s son were there to share in the moments, and Corbin is even seen in one of the photos giving his mom a big smooch on the cheek. 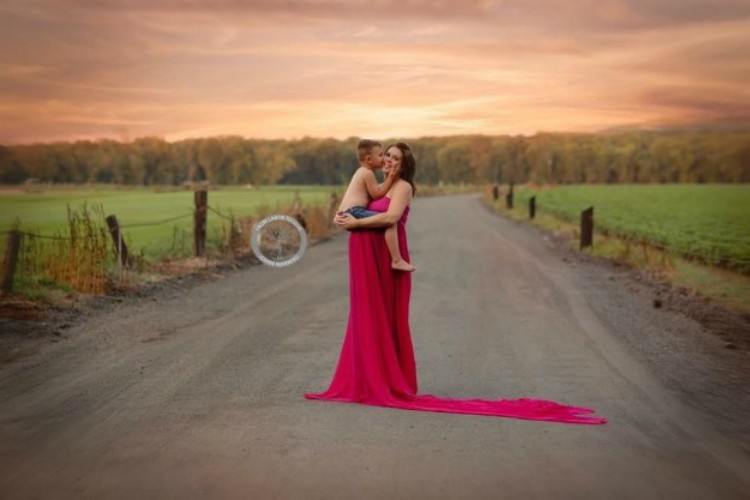 As October is Pregnancy and Infant Loss Awareness Month, the sharing of Jessica and her family’s story is timely. According to Share, a national pregnancy and infant loss support organization, one in four pregnancies ends in the loss of a baby, and the intense grief that parents experience never goes away. There is also anxiety and fear that comes with a new pregnancy for many women who have gone through such a loss. 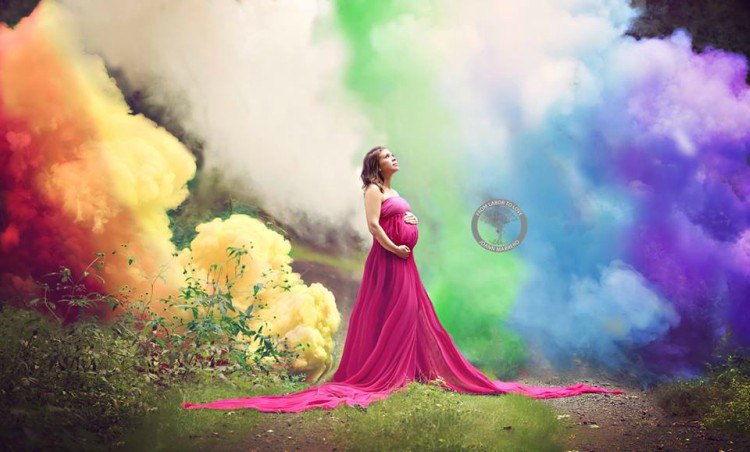 From Labor to Love via Facebook
Families such as Jessica and Kevin’s who have faced an unforgettable trauma like the loss of their children are an inspiration to us all. With a pain so unfathomable, we hope they are able to heal, and their photographic journey is a beautiful symbol of remembrance. October 15 is Pregnancy and Infant Loss Remembrance Day, so if you or someone you love has experienced the loss of a child, know that people are standing with you. We hope that you find peace and promise with each day. Please feel free to share your thoughts on this moving maternity shoot in the comments.
Share on Facebook
Most Popular