These Photos of a Rainbow Baby Birth are Touching

When Andrew and Amanda Hanson went into the delivery room on April 6th, 2013, they were understandably excited to welcome their first son, Klayton, into the world. Amanda was past her due date and induced, but her delivery was supposed to be standard procedure. So when the birth took a turn for the worst, nobody saw it coming.

Although the delivery was completely routine, it was when little Klayton physically came out that it became clear something was wrong. Why? There was complete silence; not a single cry.

It was in that moment that Amanda knew something was amiss.

Photographer Sarah Ledford had been invited into the delivery room to take photos of Klayton’s birth, something which quickly turned into pure terror for her. According to Ledford, the room quickly became flooded with a team of doctors, who managed to revive little Klayton, if only for a moment. 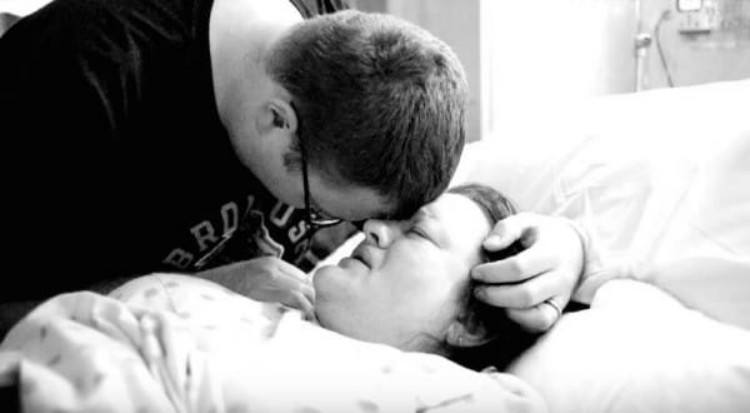 Sarah Ledford
However, Klayton couldn’t stay with his parents. Amanda tearfully recounted how she only had the opportunity to hold his hand for a moment before the baby was whisked away to a neonatal unit to hopefully be saved. Sadly, despite the doctors’ best efforts, Klayton had been without oxygen for too long and passed minutes after his birth.

What should have been a day of pure joy turned into one of unimaginable sorrow for the Hanson family. It wasn’t just them experiencing this pain, either.

Ledford said she became immersed in the entire situation, and the Hanson’s doctor, Bryan Hodges, sobbed right along with the couple. It was a loss no one involved could have predicted.

Three months later, a true miracle was brought into the lives of the Hanson family; Amanda was pregnant again. Although she and Andrew were thrilled with their good fortune, they were also terrified. Just ten months after losing their first child, they would have to go back into the delivery room. The thought of losing another child was, understandably, more than they could bare. 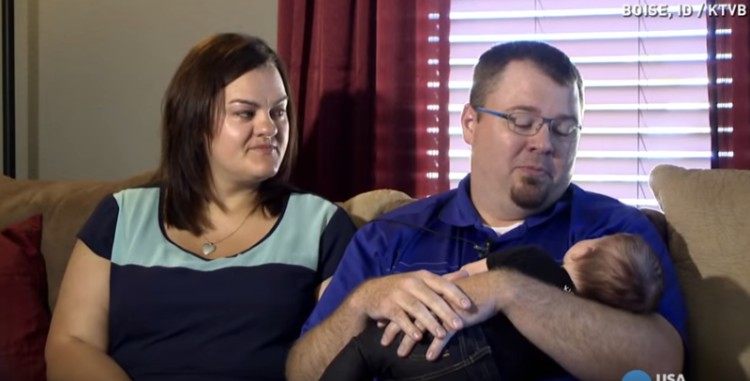 USA Today
The couple invited photographer Sarah Ledford back into the delivery room to capture the birth of their “rainbow baby.” A rainbow baby is a baby who is born following a miscarriage, stillbirth, neonatal death or infant loss. Count The Kicks says, “The rainbow is more appreciated having just experienced the storm in comparison.”

Happily, little baby Karson was born without any issues and came into the world extremely healthy. Dr. Hodges was again responsible for Amanda’s delivery, and he could barely contain his emotions when little Karson began to cry. It was then that Ledford captured an amazing photo of Andrew and Dr. Hodges tearfully embracing — an image that has since gone viral. 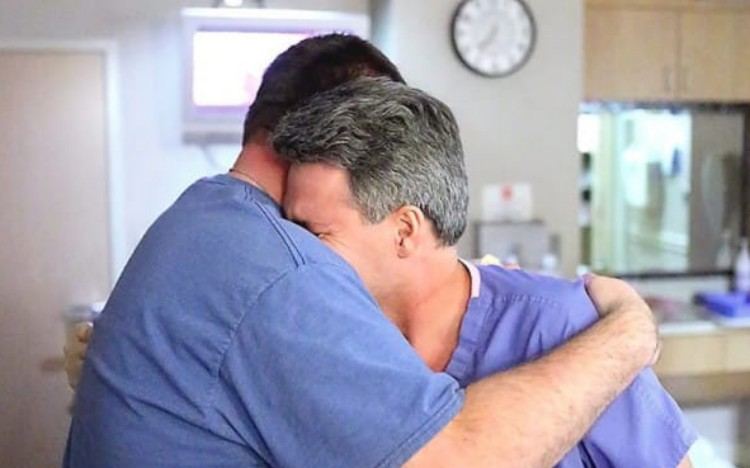 Sarah Ledford
These photos, beyond being extremely well-done, perfectly capture the complete bliss and relief that everyone in the room felt upon the birth of this rainbow baby. Ledford, who was just meant to be the “fly-on-the-wall,” was suddenly intimately wrapped up in the Hanson’s lives. Dr. Hodges, too, felt all the emotions of the family and was so incredibly happy was Karson was born happy and healthy.

Needless to say, we were all thrilled for their rainbow baby, as well! This terrible story had the most beautiful ending we could dream up.

What do you think of this amazing story and these touching photos? Share your thoughts in the comments section below.