Prince Harry and Meghan Markle are no strangers to bucking royal traditions. From adding nontraditional elements to their wedding to displaying PDA early in their relationship, it’s clear this couple has been determined to modernize the monarchy.

Their unconventional behavior throughout their relationship was capped off by their infamous relocation to Los Angeles in early 2020, but we’re now learning that’s not the only power move the two have made. In an excerpt from Robert Lacey’s new book, “Battle of Brothers: William and Harry – The Inside Story of a Family in Tumult”, the biographer and royal historian explains the couple intentionally misled the press about the birth of their son, Archie.

The book alleges that while Archie was born on May 6, 2019 at 5:26 in the morning, the Palace waited until nearly 2 o’clock in the afternoon to release information surrounding his birth. The statement indicated Meghan had gone into labor, despite the fact that she’d not only delivered baby Archie at that time, but was already home with him safely in her arms.

Meghan and Harry aren’t the first couple to keep their child’s arrival on the down-low, with many new parents choosing to keep the news under wraps until the baby arrives safe and sound. However, these two aren’t just any couple, and people across the world were holding their breath waiting for his arrival to be announced.

Their decision allegedly infuriated Harry’s older brother, Prince William, with whom he and Meghan are said to be at odds. Prince William and his wife, the Duchess of Cambridge, upheld the royal tradition of presenting each of their three children to the public within hours of their births.

We get it, Meghan. The idea of getting done up and stepping out for the world to see mere hours after delivering a whole human sounds pretty daunting. Still, the couple’s decision seemed to be less about vanity or comfort and more about safety — both for Meghan and Archie.

“Harry and Meghan were resolute that their newborn baby’s first sight of the world should not be the same insane and lethal camera-flashing that had attended — had actually brought about — the death of Diana,” Lacey wrote. 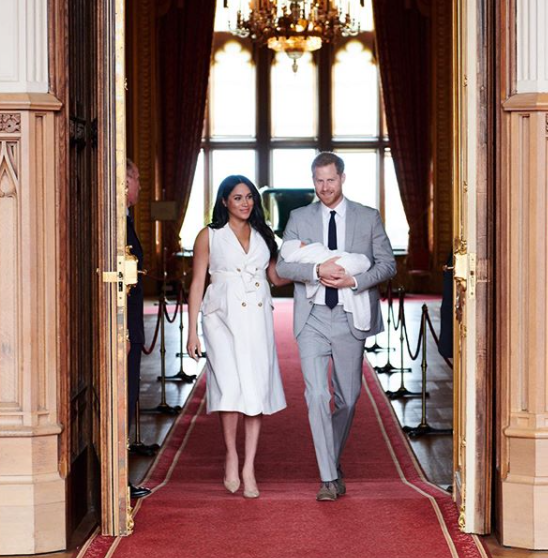 Since moving to Los Angeles, the couple has led a relative low-key lifestyle. They live in a private, gated residence, and have made bold moves when it comes to protecting their son. When drone photos were taken of Archie earlier this year, the couple filed a lawsuit against the paparazzi, who had implied the photos were taken at a ‘Malibu outing’.

Meghan and Harry’s lawsuit not only prevented the photos from being shopped around, but also served as a warning they would not tolerate the state’s privacy laws being skirted. It’s evident this pair will stop at nothing — from fabricating the time of their child’s birth to stepping down as senior members of the royal family — to stay protected.

Given his family history, we say: rightfully so.