Prince Charles Shared a Photo of the Royal Family on His 70th Birthday, and It’s Their Most Candid Photo Yet

When you’ve had 70 birthdays, you can imagine that all you really want to do to celebrate is hang out with your family. Especially when your family is growing rapidly. Oh yeah, and royal.

Prince Charles recently celebrated turning 70 years old by having a photo shoot with his immediate and extended family—and the photos are seriously the most adorable and candid things we’ve ever seen. The royals, they’re just like us!

The prince shared one of the delightful snapshots on the @clarencehouse Instagram, and everyone looks overcome with joy—especially Prince Charles, who has Prince George on his knee.

“Charles and Camilla absolutely adore being grandparents and are enthralled with Charlotte and George,” a source told People Magazine. “Charles is a warm and caring guy, but he comes even more alive around little George. He loves spending time with him.”

The photos were taken by photographer Chris Jackson in the garden of Clarence House, who also commented on the prince’s relationship with George.

“It was lovely chaos with the children,” he said. “He is a very hands-on grandfather. He was holding hands with George and Charlotte, and bouncing Louis up and down for a long time. George was very happy on the prince’s knee. They have a great relationship that’s a little more established, as George is a bit older.” 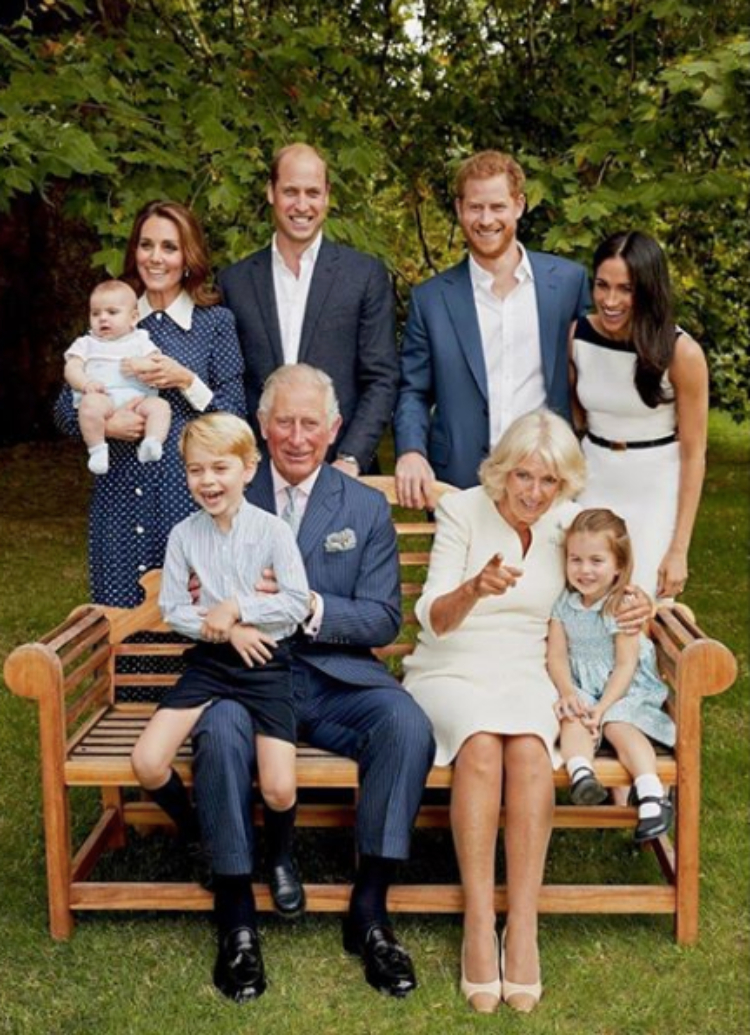 Though he and George share a special bond, you can tell the prince is a very loving grandfather to all of the grandkids. They even refer to him as Grandpa Wales! (How adorable is that?)

He’s also a loving father as well. When Princess Diana died, Prince Charles was very courteous of his two sons’ needs at the time, and didn’t introduce them to Camilla until they were ready.

“Charles was always sensitive about William and Harry’s feelings regarding Camilla,” the Telegraph reported. “It was never going to be easy, but the boys dictated the pace and soon realized that Camilla made their father enormously happy, and that his happiness was more important than anything else.”

Years later, while Princess Diana isn’t forgotten, the whole royal family looks to be doing quite well. The photo shows genuine smiles on everyone’s faces, laughing and having a great time. Everyone is coordinated in blue, white, and black attire, and look as happy and dapper as ever.

Fans from all over commented on the photo, which received nearly 135,000 likes.

“Great family photo. Obviously Camilla makes her husband very happy and this in turn makes his children happy. Glad to see his loved ones all together for Charles birthday. Happy birthday,” someone posted.

“Happy Birthday to HRH Prince Charles and your beautiful family! So very happy for you, your beautiful wife, children and adorable grandchildren,” another fan commented.

To hear more about what Prince Charles is up to at 70 years old, check out the video below.


How cute is this photo of the royal family? What is your favorite photo ever taken of them?