The Story of This Premature Baby is So Touching

When little Francis was born, he was born four months too early, weighing in at only 1.9 lbs. He was immediately sent to the neonatal intensive care unit (NICU) where he was far and away the sickest baby on the floor, out of 82 babies. The doctor’s gave him a 15% chance of survival. The Azize family was given two choices, doctor’s told them: they could do nothing and let him pass, or they could give him every chance they could to survive. Despite the doctor’s warnings that all the odds were against Francis, the parents decided to try and give him a chance at life. 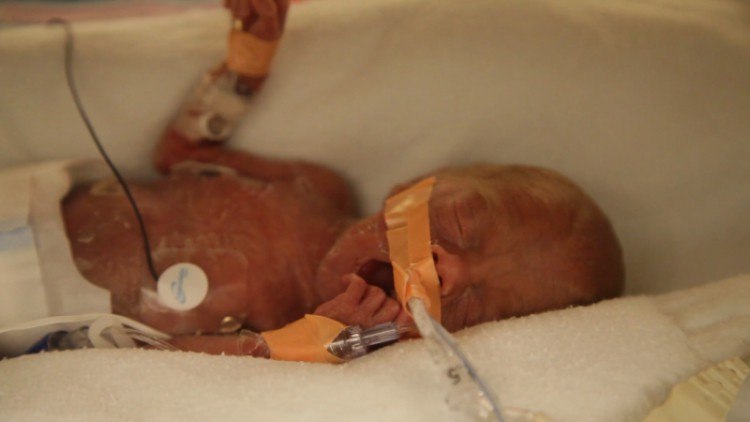 Kinnanne Films
The Azize family stayed by their child’s side, sending him love and prayers through his many surgeries and other procedures. The baby could rarely leave the incubation chamber he slept in and couldn’t live without the tubes in his nose and mouth. Things were feeling hopeless.

One day, to keep their spirits up, one of the nurses suggested that they draw something colorful on the whiteboard in the NICU room. Something that would lift their spirits and make baby Francis feel happy and at home. The nurse gave them a stack of markers and told them to get to it.

Maureen’s sister Janie happened to visiting that day, and she was quite the artist. The parents commissioned her to draw a “Finding Nemo” theme on the white board, which she did wonderfully! Nemo and Dory were there (or some look-alike version of the characters) in a fun, underwater setting. The picture made everyone smile – but the family had no idea the impact it would soon have on their lives. 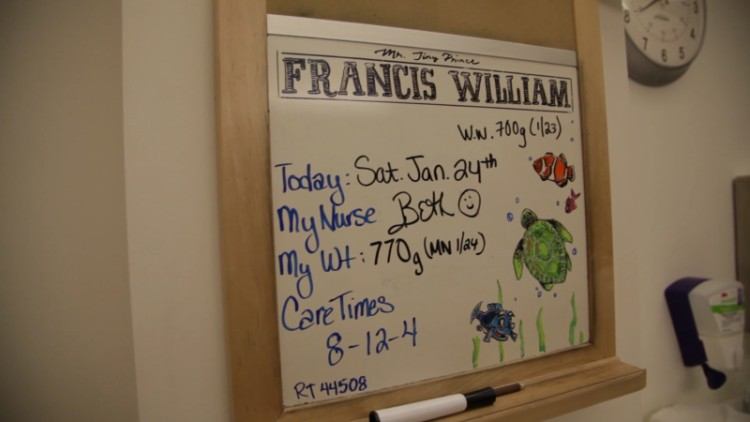 Kinnanne Films
One day soon after, Maureen’s brother sent the couple a TED talk featuring Andrew Stanton. For those of you who don’t know, Andrew Stanton is one of the brilliant minds behind Pixar, and it was Stanton who wrote and created “Finding Nemo.” The couple watched the TED talk casually…but it wasn’t until the end that their minds were really blown.

At the end of the TED talk, Stanton confesses to the audience that was a premature child. Stanton was born very sick, and not predicted to live. So when he did live, he made an effort to make the most out of this second chance at life. And just look at him now.

By the end of the TED talk, the incredulous couple was in tears. If Andrew Stanton had been a premature baby, as sick as Francis was, and he had gotten out of the hospital to grow up and become a successful, brilliant man, there was so much hope. And it was that hope that the family felt every day, and every day Francis got continuously better.

Then, something really crazy happened. The same brother who had sent along the TED talk flew in from California to see his sister. He called her as soon as he got off the plane with insane news: he had sat next to Andrew Stanton on the plane. He shared Francis’ story with Stanton, and Stanton wrote Francis a beautiful note that read, “To Francis William, Just Keep Swimming.” 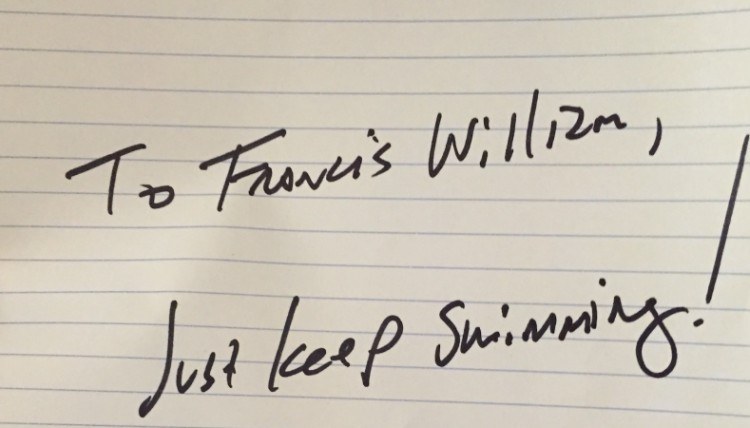 Kinnanne Films
Have you burst into tears yet? Because I’ve been crying for what feels like hours.

Finally, after nearly four months in the hospital, Francis was released a strong baby. He grew up to be a perfectly healthy child, and his parents are cherishing every day they get to spend with their son who almost left them.

Undoubtedly, this family will never forget their experience, especially the kindness of Andrew Stanton. This was an amazing miracle, one that has truly touched all of us.