What This Postal Worker Did for This Dog is Heroic

Oftentimes, when we see something unusual or something that we know isn’t quite right, we have a tendency to ignore it. We don’t want to butt our noses into other people’s business or appear rude, and that can sometimes prevent us from speaking up when an injustice is happening.

But when it came time for this postal worker to speak up, he didn’t hesitate.

A Philadelphia postal worker was walking his normal route, delivering mail, when he saw something startling on the side of the road. It was a dog, a female boxer (although he may not have known that at the time), tied to a tree outside on the sidewalk.

Some people may have seen the suffering dog and thought, “Oh, maybe her owners put her out here to go to the bathroom or maybe they popped into a nearby store.” And with that thought, they might have frowned at the boxer and walk away.

This postal worker, however, couldn’t ignore the feeling that something was wrong with this picture. As he drew closer, he saw the filthy dog was emaciated with a huge gash on the top of her head, and he knew immediately the pup was left here to die in the hot sun. 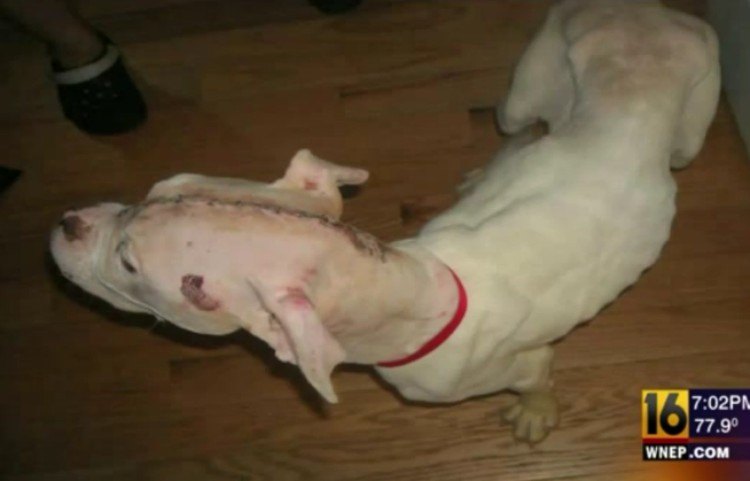 LittleThings via WNEP
He knew he had to act. First, he rushed to give her food and water. Then, he persistently called the local shelter and refused to leave until rescuers arrived to take her to safety.

Thankfully, because of his kind persistence, the abused dog was put into the amazing hands of the folks at Adopt a Boxer Rescue. This kindhearted organization took in the boxer and named her Kuperus. They immediately got to work taking care of her medical needs, because the poor thing was in even worse shape than anyone could have imagined.

Kuperus was close to starving to death, the vets discovered that the wound on her head either from a bullet or knife, and her jaw was so badly broken that she needed multiple teeth removed.

Despite the horrific abuse Kuperus endured, she is an incredibly sweet dog. The team at Adopt a Boxer Rescue were taken aback by loving and charming she was.

“It boggles my mind how she craves attention,” said Dawn Karam, founder of Adopt a Boxer Rescue. “She really wants nothing more than to be touched… even after some terrible human beat her and left her to die. Simply amazing.”

Currently, the sweet dog is recovering in a foster home and making amazing progress, while the shelter volunteers worked tirelessly on finding whoever was responsible for the abuse. We hope that Kuperus thrives in her whatever lucky family becomes her “forever home” and encourage everyone to share this touching story.