Here’s Why This Baby Has Some Very Unusual Namesakes

Inside Edition I Vanessa Prado

Names are funny things. Sometimes they are inspired by important people or events, while other times they end up being hurriedly chosen at random from a baby book. In any case, the star of our story today certainly falls into the first category. What makes him so interesting is the fact that his parents had never even met his namesakes until just before his birth. Let us explain . . .

When mom-to-be Vanessa Prado was just three weeks shy of her due date, she was greeted with an unexpected surprise: her water had broken. Though she was convinced that she wasn’t actually going to go into labor anytime soon, she and her boyfriend Dennis Dillard decided that it was best to head to the hospital anyways.

In an interview with Inside Edition, the San Diego mom explained, “I was initially like there is no way I am going to have him today.”

Then, the unthinkable happened. Prado recalled getting into the car and making it about a block from the house when she realized that there was no way that they were going to make it much further. She was going to have to have the baby right then and there, miles away from any hospital.

She told her boyfriend to pull over into a nearby post office parking lot where he got on the phone and called for help. Moments later, two San Diego Police Officers, Matt Enderlin and Eric Hustad, responded to the emergency call.

Apparently cops get training for situations like this, because the two jumped right into action, with officer Hustad holding the mom-to-be’s hand and officer Enderlin “catching” the baby. The most astounding part of the whole story is the fact that, according to Prado, “within two minutes of them arriving and getting out of the car the baby came.” Talk about quick thinking!

Everything ended happily enough, with the party being escorted safely to the hospital, and mother and baby recovering quickly. Prado, of course, is extremely grateful for the officers’ midwifery skills. She said, “I didn’t think it was going to happen that fast. Had they not shown up my boyfriend and I would have been freaking out.” 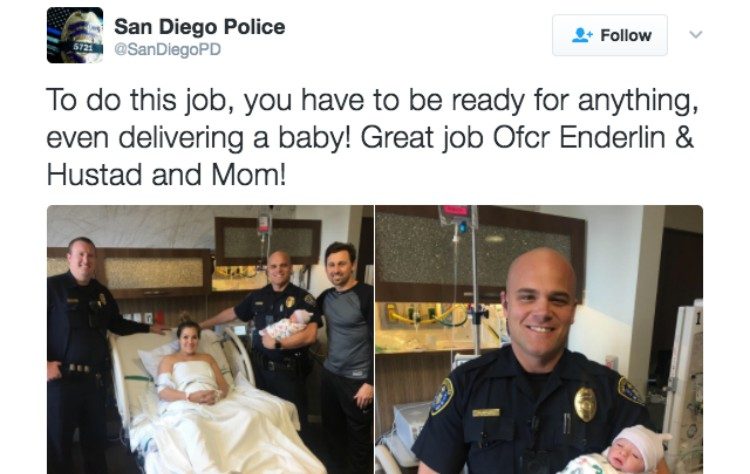 Twitter I San Diego Police
The gentlemanly policemen even spent some quality time at the hospital with the baby that they helped deliver. And how cute is this tweet? It looks like they are beaming just as much as the baby’s parents!

Both Prado and Dillard were so humbled by the officers’ actions that they decided to honor the two in a special way, by naming their son after them. How sweet is that?

To learn the unusual middle name the parents gave to their new baby boy, be sure to click on Inside Edition’s video below.

What do you think of baby Pierce’s middle name? Do you have a surprising birth story that you would like to share? How did you go about choosing your child’s name? Tell us all about your thoughts and experiences in the comments section below!