Every time you’ve bought a new suit or pair of dress pants, you’ve probably noticed a small detail with the stitching. Yes, the pockets are sewn shut.

Maybe it has confused you. Maybe you believed you purchased a defective garment. Or maybe you just thought that’s the way it’s supposed to be. It is.

Both men and women’s clothing can be found to have this mechanism in place that is there by design. They are supposed to be sewn shut but they are also meant to be cut open. These extra pieces of thread are in place to protect the garment from losing its shape.

Pockets won’t sag or get stretched out while being transported or hanging on a display rack. Their shape also won’t get tampered with as people (who come in different shapes and sizes) attempt to get a proper fitting for the suit or pants.

Whether you’ve visited a tailor for your dress clothes or a large retail store, it’s possible that you encountered those stitches while trying the clothes on. Pockets are also sewn closed to keep customers from sticking their hands into the pockets. That’s actually a good thing.

Think about how many people could have possibly tried on the same pair of pants and where their fingers could have been. Hold on to that clean thought. How often do you launder the insides of your pockets when you buy new clothes? 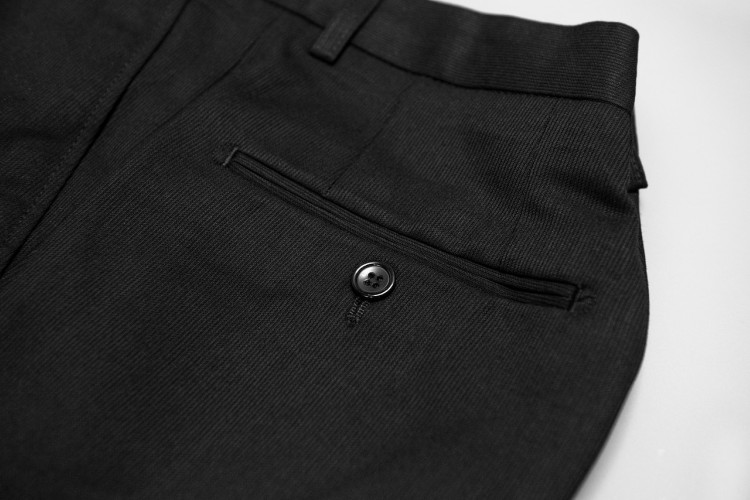 Another advantage of keeping the pockets sewn shut is for deterring shoplifters who would want to stuff the pockets with stolen wares or clipped tags.

Depending on where you purchase your attire with its sewn-up pockets, they may remove the thread for you. If not, you can either yank out the stitches gently with your own hands, cut them out with scissors, or use a seam ripper to remove them.

Some people choose to leave them as-is because they prefer the look of the suit with fettered pockets. That’s up to you. It’s also advised to keep the contents of your pockets at a light weight so you don’t ruin the silhouette.

That’s up to you, too, but it makes sense not to bog down your pants pockets with phones, cumbersome keys, or bulky wallets. Sometimes, you’ll also find a similar stitch on the backs of skirts or suit jackets. They are supposed to be removed too. Men: the store can clip those center vents for you or you can do it at home.

Don’t get these sewn pockets confused with a false pocket, otherwise you’ll end up with an unintentionally holed up clothing piece. Look for a pocket lining by flipping the piece inside out or feel around for one.

Check out this video from Wochit that explains this tidbit of pocket-stitching knowledge for those who were not aware. And again, if you’re too scared to pull the thread on your own, have a professional do it!

Did you already know about this intentional pocket closure? Do you sometimes forget to remove the stitching? What other clothing mysteries have you learned about over the years?