Watch How this Woman Curls Up for Glam Makeover

We all feel stuck with our look sometimes. Complacent with our current hair situation, years and years will go by before anything that resembles newness is welcome. It takes an itch, a nudge, or a swift kick.

Christopher Hopkins, better known as the Makeover Guy, was the one. Traveling from a small town in Minnesota to Christopher’s salon in Minneapolis, Joanie wanted a style that was more suited to her maturity. Seated in his chair, Joanie was ready to be introduced to Christopher’s Power of Pretty.

What we learn first is that Joanie’s hair isn’t in its healthiest state. It’s thin. It’s weak. It’s missing its spring. Christopher explains that her hair has lost some elasticity. What Joanie wants is fullness and a touch of romance to enhance her look. Step one: a trim.

The crown of her head was where most of the thinning was visible, and Christopher had an idea to give her hair a boost. His solution? Pin curls. This wet-set technique is not always the easiest to do, but they have a vibe to them that screams glam. After her cut and red highlights, Joanie’s pin curls were loosely set to perk up her natural waves and va-va voom.

While those curls were busy setting and doing their air-drying thing, Joanie was sent to makeup maven, Kami. She applied a brown-black liner to the bottom, outer corner of her eyelid for a softer look, and blended it into the eye shadow. Now, those eyes pop! 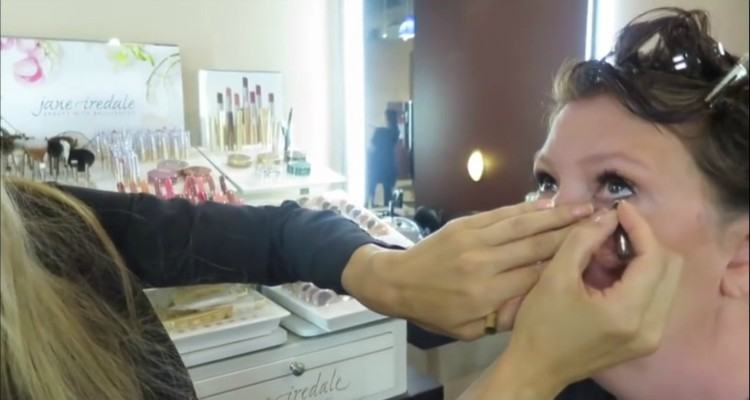 TheMakeoverGuy
Still getting the finishing touches of her makeup put on, Joanie moved into the final phase of her makeover: pin curls unleashed. Christopher took his time to unravel the curls, and wow, Joanie got volume. No signs of her hair thinning on top. Wow.

Watch the clip to see how Christopher and his team worked their magic. Those eyes! Those cheeks! That hair! I believe Joanie’s got her groove back after all those years. What’s cool about watching transformations like these is that you can pick up tips for your own hair and makeup routine. Set and blow dry pin curls to disguise thin hair. Who knew?

When women contact the Makeover Guy for transformations, they know to expect big things. When Joanie was asked what she liked the best about her makeover, she replied, “Not having control, and letting him do whatever.” She couldn’t stop smiling and you’ll notice that she has a new radiance about her now. We’re sure she can’t wait to see her family freak out.

What are your thoughts on Joanie’s amazing makeover? Are you tempted to go see Christopher too? If you could get a dream makeover, what would you have done? Tell us in the comments!