One of the most challenging parts of every parents’ day is dinnertime — the very word is enough to make some moms and dads audibly groan. Between the crying, pouting, and furious demands for chicken fingers, picky eaters can make sometimes make it impossible to get through a full meal.

And if you have more than one picky eater in your home? Forget it.

The mental energy it takes to remember that your oldest hates broccoli and loves pineapple, but your youngest hates all fruit and could eat carrots all day is EXHAUSTING. Not to mention expensive; every parent knows the pain of having to throw away un-touched dinners can actually make your wallet ache.

But, don’t worry, you don’t have to resign yourself to dealing with picky eating habits until your kids eventually “grow out of it.” According to the writers at Scary Mommy, there’s one simple phrase that can seriously help to end picky eating forever: “You don’t have to eat it.” 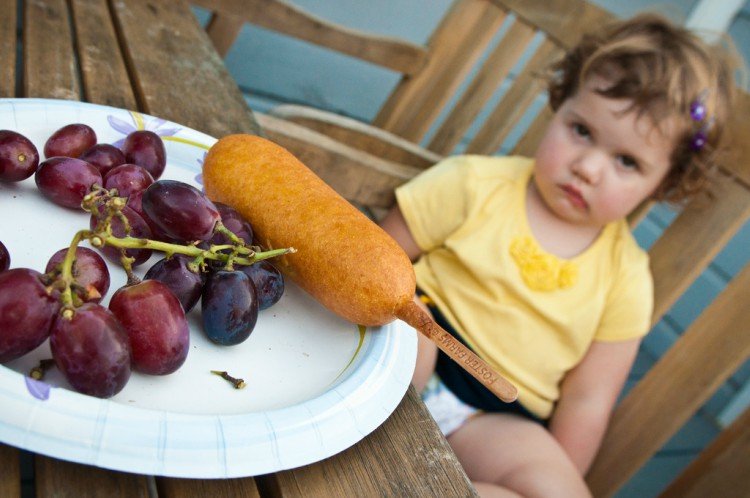 It might sound too passive, like something your kids could easily use to walk all over you, but writer Leigh Anderson claims it was a game-changer.

“So what are the six magic words? ‘You don’t have to eat it.’ Our new system doesn’t mean that he never expresses dislike or says ‘yuck’ or claims that he’s not going to eat anything. In fact, the other day he looked at his plate and said irritably, ‘Hey, I wanted a good dinner,’ which, after an hour at the stove, made me want to sweep the whole table of food to the floor in an elaborate, screaming, Melissa McCarthy-esque breakdown.

But every time he says yuck or I don’t want that, I say calmly, “You don’t have to eat it,” and tuck into my own meal.“

Now, of course, making sure your kid eats is important — obviously, we don’t have to tell you that. But offering a well-rounded meal and having this laissez-faire attitude might just be the way to “trick” your kids into eating.

By preparing a plate with a variety of healthy options (say, a serving of veggies, potatoes, a meat, fruit, and some rice) you’ve given your kid plenty of options for them to choose from! If they want to eat just fruit for dinner and that satisfies their hunger, then that’s what they’ll eat that night.

Anderson claims that this technique helps her make pretty much any dinner she wants, as long as she provides SOME things that she knows her son will eat. Not catering to her kid’s fits allows her free-range over the menu and guarantees that her son eats something for healthy dinner, even if it’s not the entire plate of food.

Have you ever tried this technique? Do your kids respond to these six magic words? Make sure to share your thoughts and your tricks to cope with picky eaters.