@nowthisnews via Twitter
Peanut butter is one of those truly versatile foods. You can toss a spoonful in your smoothie or use it to make sauce for your pasta. You can spread it on carrots or celery, or on top of banana bread. Really, there a few things peanut butter doesn’t taste good with!

But there’s one peanut butter sandwich recipe that’s making half the world raise an eyebrow, and the other half lick their lips.

People who eat these say the “right” way to do it is to spread peanut butter on one side, then mayo on the other, and smash the pieces of bread together. However, some people like to mix the two because it creates a creamier consistency for the peanut butter that makes for easier spreading.

How did the peanut butter and mayo sandwich come to be?

Personally, we’re a bit confused by the combo, but it’s apparently a pretty big thing, especially in the south, and has been for quite some time. In fact, the combo was invented around the time of the Great Depression as an affordable way for people to feed their families. Who knew?

The sandwich really peaked in popularity around the 1930s and 1940s, some ads even referring to it as a the “lunchbox special.”

If you wanted to get a little fancy with it and liven up the sandwich, people would add anything from fruit like pineapples, apples, and bananas, to bacon, eggs, onions, pickles or raisins. It’s basically the old-school version of this day and age’s avocado toast with all the fixins—except without the avocado! 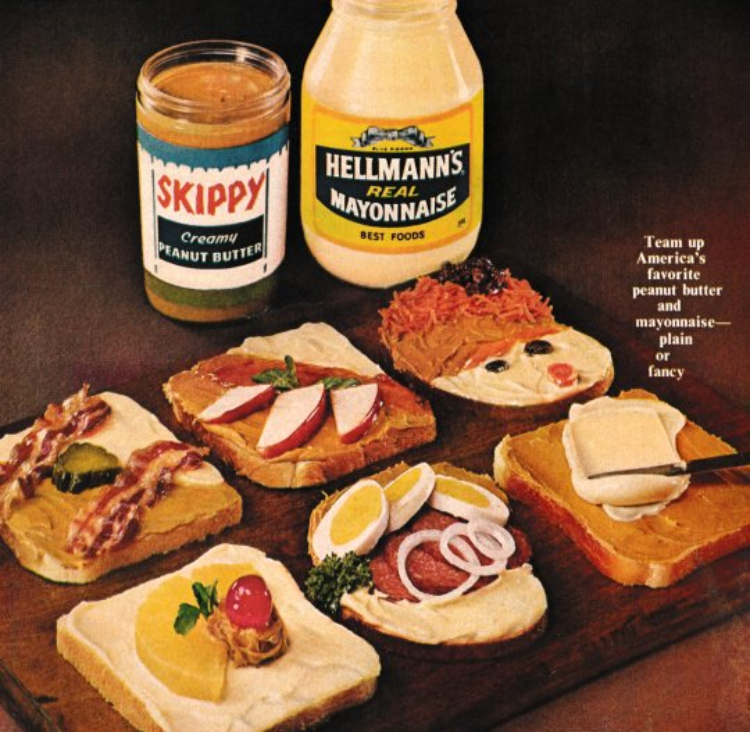 Like with any controversial food, the internet is totally split on peanut butter and mayo sandwiches. Brandon Chonko, a Georgia poultry farmer, says he first was introduced to the combo by his grandmother and still isn’t quite sure what to think of it.

“I have tried to tell people about this sandwich. They’ve all thought I was joking,” Chonko says. “I remember being at my grandma’s house in Georgia, and asking her for a peanut butter sandwich. She added mayonnaise. I took a bite and thought, ‘What the—?’ It was like sour peanut butter. But talking to my mom and my aunt, they’re like, ‘Oh, yeah! Takes me back! So good!’”

It seems that those who grew up with the sandwich can’t get enough of it. “I was five when I saw my mom eating a peanut butter-mayo-mustard-lettuce sandwich. She let me have a bite. It instantly became one of my favorite foods. Honestly, I don’t eat it enough, for how good it is! If you’ve never tried this, do yourself a favor,” says one Twitter user.

However, others have pretty strong opinions on how grossed out they are by peanut butter and mayo.

“If you ever think eating a mayonnaise and peanut butter sandwich is okay I’m pretty sure you’re a serial killer,” one twitter user wrote.

“If you’ve ever made and consumed a peanut butter and mayo sandwich, we can’t be friends anymore,” another naysayer commented.

I guess it’s just one of those things you can’t knock until you try! What’s your opinion on the peanut butter and mayo sandwich? Did you grow up eating this, or is this combo just something you’re hearing about now?