How This Mad Ventriloquist’s Dummy Stole the Show

If you’re a diehard “America’s Got Talent” fan, you are likely enthralled with this season’s standout, Darci Lynne. The pint-sized ventriloquist has simply knocked out the competition week after week with her hilarious stand-up and too-die-for vocal skills.

And, while we can’t stop singing the praises of this young talent, we think it’s time to take a walk down memory lane and shine a spotlight on the original “AGT” ventriloquist—Paul Zerdin.

In 2015, this talented Brit stole the entire competition with his seriously innovative puppeteering talent. What was ultimately so impressive about Zerdin was the fact that he managed to breathe new life into a fairly traditional art like ventriloquism; he really made it his own!

Although there are plenty of classic clips of him performing on the show, we have to say that our favorite was perhaps his most pivotal—the one that secured his spot in the show’s finale. It took place at the lauded Radio City Musical Hall, quite the overwhelming venue, but Zerdin was as cool as a cucumber at the top of his performance.

He begins his act by first explaining to the judges that his wingman, puppet Sam, is currently not talking to him. As it turns out, both the human and his puppet pal got into an argument right before they were set to perform—talk about bad timing!

After some hilarious back-and-forth, the annoyed ventriloquist decides that he has had enough of his puppet’s antics. In a moment of complete resentment, he leaves his buddy Sam on the stage all alone and walks off in a huff.

There is obviously a moment of awkwardness; after all, how is this little guy going to speak without Zerdin around, anyway? Things remain tense, with uneasy laughter floating through the air until something truly amazing happens… 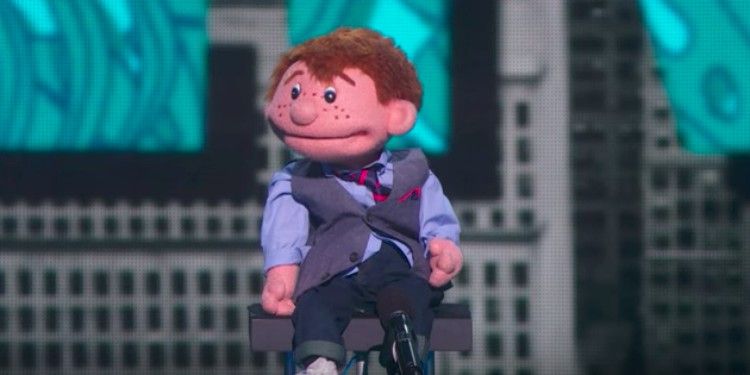 America's Got Talent
…the puppet begins to speak all by himself!

How this man became a superstar ventriloquist

Perhaps not surprisingly, Paul Zerdin has been a professional actor, ventriloquist, and all-around performer for years.

Although his appearances on “America’s Got Talent” were his first true introduction to American audiences, he has been well-known in the UK since he hosted his first TV show in 1993. Since then, he has performed regularly on the BBC and has even held residencies at the acclaimed London Palladium.

After snagging the season 10 title, the multi-talented Brit performed a five-week run at Las Vegas’ Planet Hollywood, which he was able to secure upon his victory. The man has had a truly impressive career, and now that he has millions of new fans here in the States, the sky clearly is the limit for Zerdin!

Now that you know enough about this talented guy’s backstory to fully appreciate his performance, it’s time for you to take a look at his skills for yourself. Just click on the video below to watch Zerdin make his puppet talk, even from feet away.

We’d love to hear your thoughts on this famed puppeteer! Did you watch Zerdin when he appeared on “America’s Got Talent?” If so, was he your contestant of choice? Who do you prefer: Darci Lynne or Paul Zerdin?