A Parked BMW Was Taking Up Two Spaces, So A Jeep Driver Does Something About It

What’s one of your biggest pet peeves? Maybe it’s when someone interrupts you when you’re trying to tell a story? That’s pretty annoying.

Or perhaps it’s when someone doesn’t cover their mouth when they cough or sneeze? Pretty gross. Chewing with your mouth open? Also gross. All of these pet peeves are pretty common. Typically if it’s bothering one person, it’s probably bothering another.

We have to admit, one of our biggest pet peeves is when someone does a terrible park job. You know who we’re talking about—that person who’s cruising down the parking lot and takes a turn into the spot, except TOTALLY misses.

It’s fine to do that—but when this person doesn’t try to straighten themselves out and just leaves the bad park job, that’s when it really gets to us.

That means that this person is now taking up more than one spot, which is especially an issue during a busy time of day or of there’s limited parking at this particular destination.

Even if they’re crooked but there’s still room to park next to them, you want to avoid that spot as much as possible since they’ll probably hit your car when they’re backing out. 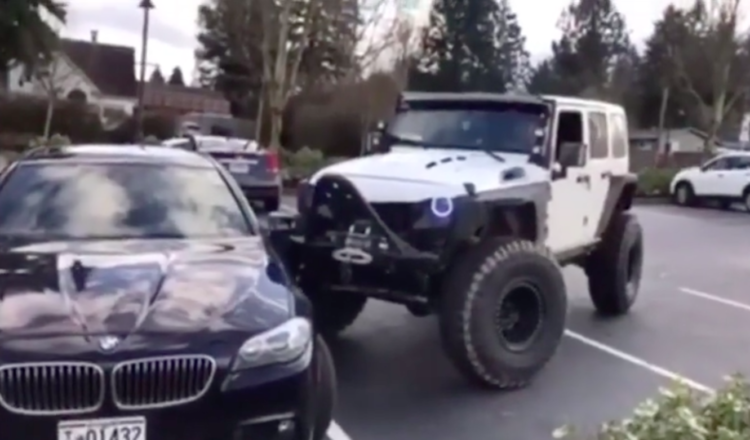 Whenever we see a car like this parked, we roll our eyes and try to find a spot as far away as possible. Sure our blood may boil and we might want to write this person a nasty note, but we’ve always been too chicken to actually do anything about it.

But two men weren’t scared to take action when they happened upon a bad park job. The men, who were driving a Jeep, witnessed a BMW taking up multiple spaces by parking completely crooked, and were not very happy about it.

“Look at this guy. Just look at his park, man,” one of the men says to his friend in annoyance, pointing out just how horribly the BMW was parked. Before they drove away from the madness, the man then said to his friend, “Go record, I’m about to do something.”

The second man gets out of the car and watches as his friend gives the BMW, well, a little push in the right direction, if you will.

That’s right, the man drove his Jeep slowly into the badly parked BMW—but not to dent the car or smash it up as revenge. Just to do him a favor and straighten out his car to be inside the white lines!

It totally worked. The BMW glides right into place. Alas, a perfect park job! We’re sure the driver won’t pull that kind of park ever again.

To see how these two men got the car into place with their Jeep, check out the video below.

Does a lazy park job piss you off to no end? Would you ever do something like this to get back at the person for parking badly? What’s the most passive aggressive thing you’ve ever done to someone who did something to annoy you? (We won’t tell!)