Doctor Claims That Eating Oysters Can Treat Anxiety And Depression

You’ve probably heard before that oysters are an aphrodisiac, but have you ever heard that these slimy shellfish can can help treat anxiety and depression?

One assistant clinical professor of psychiatry at Columbia University, Dr. Drew Ramsey, swears by this fact, and actually prescribes oysters to some of his patients to help make them feel better in these instances.

There are a few reasons why oysters might be able to aid in anxiety and depression: First, oysters are high in vitamin B12, which studies have shown can help with reducing shrinking of the brain. In addition, oysters contain a host of omega-3 fatty acids, and research shows those with deficiencies in omega 3s may have a higher risk of depression and even suicide. Basically, the more omegas, the better.

Oysters are also rich in zinc, which has been shown to help normalize various brain functions. On top of all that, iron, which oysters have a lot of, is helpful in improving dopamine levels in the brain. A lack of dopamine has been linked to depression and anxiety, and can increase people’s stress levels.

So if you’re feeling unusually down or anxious, you might think about slurping back a few oysters. It can’t hurt, after all: Besides all of the aforementioned, oysters have many health benefits including being significantly low in calories, and being a good source of protein, which helps keep you fuller longer.

One caveat: Just be aware that eating an oyster or two won’t wholeheartedly cure everything going on; it can just aid in the healing process of feelings of anxiety and depression, but you still need to combat these ailments with other treatments. 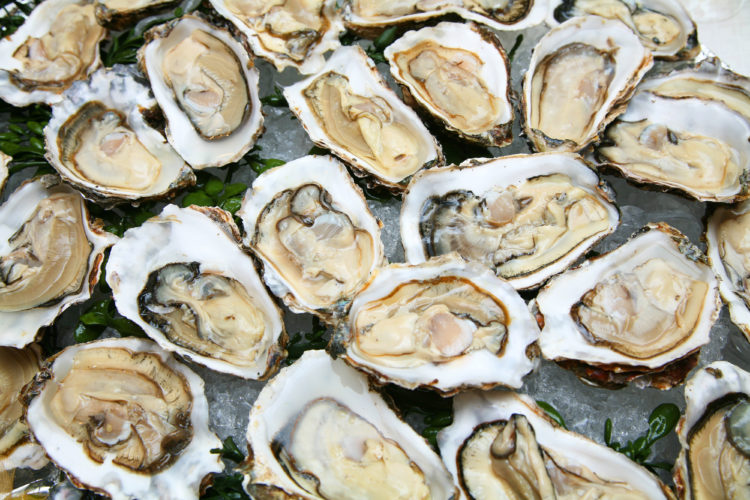 For example, one of Dr. Ramsey’s patients consumed 36 oysters in one week (yep, three dozen!) and felt so much better. However, he also avoided fried foods and fatty meats, foods that he used to typically eat, which also deserves some credit for the change. “[Oysters are] one part of the whole package that helps alleviate my depression and helps me to feel better,” the patient said.

As you can see, it’s not just oysters. Ramsey says that the food we put into our bodies in general plays a huge role in how we feel every day. For example, if you’re eating highly processed, fried garbage all the time, anxiety and depression are bound kick in. But, if you replace these foods with more nutritional options, it could do you wonders.

One diet that’s been shown to have some major brain-boosting benefits is eating Mediterranean style; pack your plates with lots of whole grains, legumes, seafood, leafy greens and high-fiber fare. These foods have been proven to help you feel better, plus they can help keep your gut healthy, which has also been linked to mood regulation.

“Our imaging studies show that the brains of people who follow a Mediterranean-style diet typically look younger, have larger volumes and are more metabolically active than people who eat a more typical Western diet,” said Dr. Lisa Mosconi, the director of the Women’s Brain Initiative at the Weill Cornell Medical Center in New York.

Have you noticed that certain foods can make you feel better or worse, or heighten symptoms like anxiety and depression? Did you have any idea that oysters can help combat those?