This Orangutan Has the Best Reaction to a Treat!

One of the big rules at most zoos is to not feed the animals. There’s a million reasons why: you could feed them something poisonous to them, you could anger them, or you could even entice them to approach you in a dangerous way. Needless to say, don’t feed the animals at the zoo. Well, this one zoo-going patron decided to ignore this common knowledge and throw a little treat at an adorable orangutan who was just hanging out in his area. The reaction that follows is absolutely priceless.

Rumble user Vitaly R. was visiting Bali with a group of his friends when they decided to go to a local zoo there. When walking by the open orangutan encampment, they saw one squat, little orangutan hanging out at the edge of his grassy area. They had probably stopped to observe him, maybe even to wave hi!

But what we’re not quite sure what encouraged them to do this.

When the video starts Vitaly R. is hold out his hand over the wall around the orangutan camp. He’s obviously showing something to the orangutan and considering throwing it over to him – but he looks nervous. Vitaly is looking around shiftily, probably checking for guards or zoo staff, and at one point shrugs to his friends behind the camera, as if to say, “It’s not worth it.”

With a little coaxing, his friends convince him that it’s a fine idea. Giving one more suspicious look around, Vitaly R. goes back to the wall and tosses whatever was in his hand to the orangutan – it looks like a little piece of food. The orangutan catches it in one expectant hang (one massive hand, we might add) and gobbles the treat down.

The man then laughs and asks the orangutan something; we’re assuming he’s wondering where his treat is! 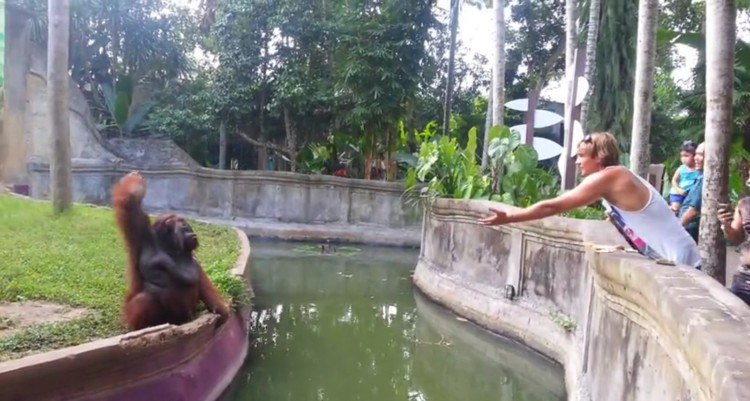 Vitalyraz
The orangutan and Vitaly R. have the most hilarious stare-down after this, like the ape is so over this human’s antics. But, after a few moments of sassy thought, the orangutan reaches next to him and picks something up from the grass. It looks like a fruit peel, perhaps? He pulls back his long arm and throws the peel back over the water, over the wall, and right into the man’s waiting hands!

Funnily enough, the orangutan looks just as hesitant as the man did to throw over his treat. The ape pauses for a long time and even looks around for guards, too! But, eventually, he makes a perfect throw that goes right to the man. Unbelievable.

After thanking him for the treat, the man throws the peel back to the orangutan – which the orangutan doesn’t appreciate very much. As soon as it lands in his large hands, he pulls his arm back again and tosses the peel off to the side of the man, so it lands in a bush…and this is where Vitaly R. decides maybe he should go. Too funny.

Although we do not condone or encourage anyone to do what this man did, we certainly appreciate this hilarious video and the amazing back-and-forth we all got to witness!

What do you think of this video? Share your thoughts in the comments section below.