If you’re like me, you love looking at picture puzzles — I can’t stop until I figure them out! Take the one of the optical illusion puzzle that asks you to figure out how many legs an elephant has, for example. I got it…eventually!

One Twitter user’s photo of another set of legs — and another optical illusion — has been freaking out the internet. Marisol Villanueva is an 18-year-old woman from Spain who’s into fashion and photography. It’s not a puzzle, exactly, but when she posted a selfie of a cute new outfit, followers were stunned.

Why? Marisol’s selfie appeared to be a mind-boggling photo showing her extremely skinny legs. As in toothpick size! And so the internet started going crazy — not over the cute sweater and pants she got from Zara and Stradivarius, but over her legs. A few typical comments:

@fushia1 Really thought that you had 2 tiny legs

@yourmisses is this real? those cant be her legs

Then again, plenty of people basically said “wait a minute” and realized what was really going on in the photo. Marisol’s new pants just happened to have a pinstripe that just happened to be the precise color of the floor she was standing on. When Marisol turned to the side for her selfie, it created an optical illusion where one normal leg seemed to be split into two crazy skinny ones.

So what fooled so many people? For one thing, the preview of Marisol’s photo shown in her original tweet cut off the bottom part of the photo, which clearly shows her two feet. To see the full picture, you actually have to click on the tweet. For another, it is true that the stripe on her pants is ridiculously close to the floor color.

The situation reminds me a little of the “dress” photo that practically broke the internet in 2015: people somehow couldn’t decide if it was white and gold, or blue and black. It’s also a little like the tennis ball problem, where people can’t decide if they are yellow, green, or something else. It seems like people sometimes have trouble believing what they see!

Some people decided to have a little fun with the whole situation surrounding Marisol’s photo. Check out this slightly “photoshopped” version of the pants: 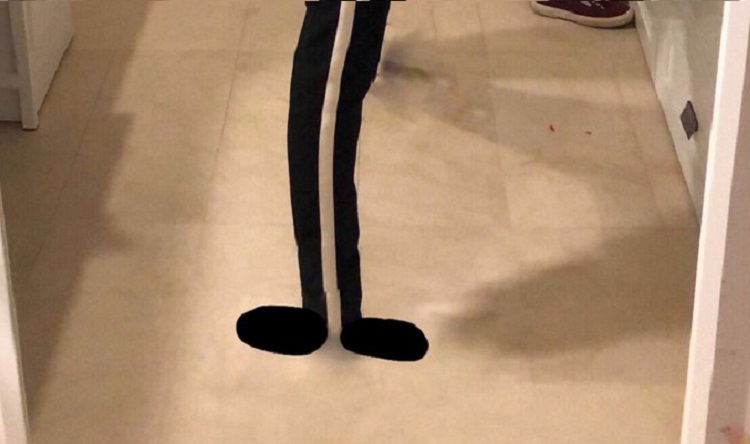 Plenty of others followed up with some support for Marisol:

@Arcana Legacy Everyone talking about the stripe being your thigh gap and I’m here like: THE OUTFIT IS SO CUTE SIS!!!

As for me, I’ll admit that when I first saw the photo, I thought for a second I was looking at two crazy skinny legs. Then I thought about the way the pinstripe was curved, and realized I had to be looking at a single leg. Still, the reactions to the photo are super fun to see!

As of now, Marisol’s original post has had 7679 retweets, 44,431 likes, and almost 1000 comments. The story’s spread around the world, in Poland, China, the Netherlands, Norway, India, and many other countries. What do you think about it?