Dance Sequences from Old Movies Get Put Together with “Uptown Funk”

There’s a lot to love and appreciate about modern cinema, but for me, nothing touches the magic of a classic movie musical. No special effects – with some iconic exceptions! – are needed for these scenes; they’re just incredible showcases of pure human talent, and a great song-and-dance routine can make me and millions of other fans smile like nothing else can. So to see some of the best moments mashed up together and set to a catchy, current pop tune? It’s so. Much. FUN. If you’re having a bad day, you just have to watch this video.

It comes to us from the movie-loving brain of Michael Binder, author and film preservation proponent. When he saw another viral mash-up featuring 100 movie dance scenes paired with Mark Ronson and Bruno Mars’ “Uptown Funk,” he knew he wanted to do the same— but only with movies from the Golden Age of Hollywood. While Binder didn’t quite make it to 100, he did make it to 66, and none of the movies have been sped up or slowed down to match the song, and none of them were made after 1953. What follows is the amazing result, a magical movie montage that proves classic song-and-dance women and men have just as much – if not more – rhythm and talent as anybody acting, singing and dancing today. Watch this.

How absolutely delightful was that?! Not only is it a treat to see clips from so many classic films, it’s so impressive how Binder was able to time everything so exactly. If you’d never seen or heard any of them before, you could almost believe they were actually choreographed to “Uptown Funk.” My favorite moment comes around 1:34, when he found a clip from Go Into Your Dance that’s perfect for the moment Mars sings, “Stop, wait a minute”:

I’m just a sucker for a well-timed pause, I guess! There are so many great moments to pick out, and so many delightful movies worked in here. Just take a look.

It just wouldn’t be a movie musical montage without Singin’ in the Rain. That’s Donald O’Connor, Debbie Reynolds and Gene Kelly in the 1951 classic. 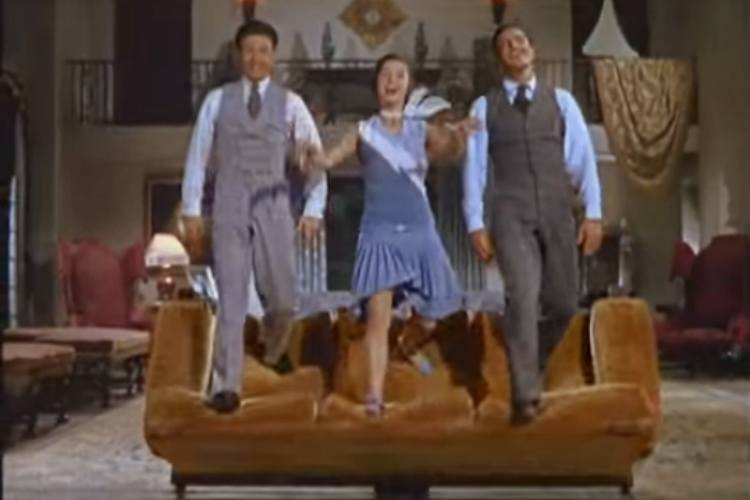 Did you recognize this one? It’s longtime movie partners Judy Garland and Mickey Rooney in one of their most popular films together, 1939’s Babes in Arms. 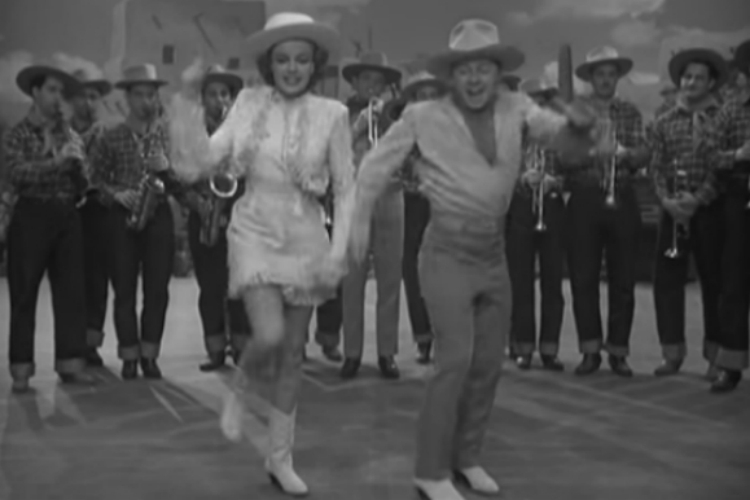 Yes, this one’s Gene Kelly and Frank Sinatra together in sailor suits, but it’s not, like I thought originally, 1949’s On The Town— it’s actually their first buddy picture, 1945’s Anchors Aweigh, featuring them running around Los Angeles. 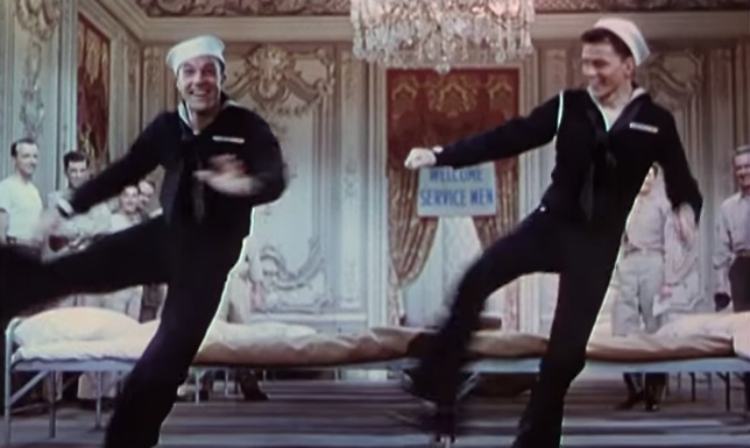 Here’s a clip from On The Town with Kelly and Sinatra, along with Jules Munshin, Gene Kelly, Betty Garrett, Ann Miller and Vera Ellen. 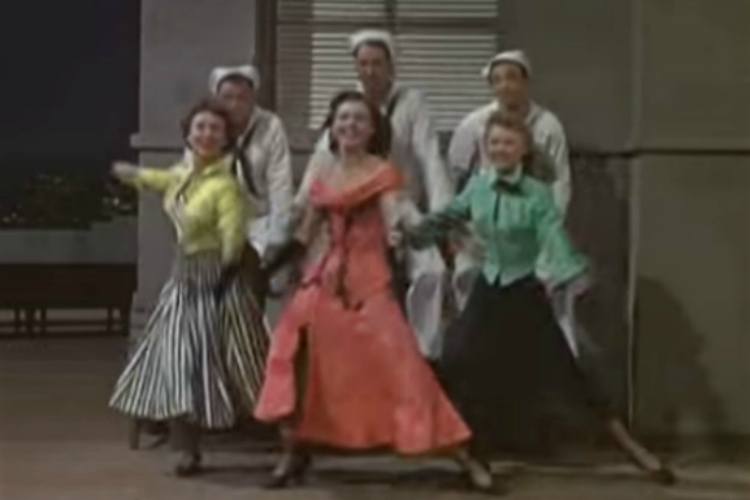 And here’s the part of Anchors Aweigh you probably remember: the iconic scene where Kelly dances with a cartoon Jerry the Mouse!

Not to be outdone, we also have Fred Astaire dancing on the walls and the ceiling in 1951’s Royal Wedding. 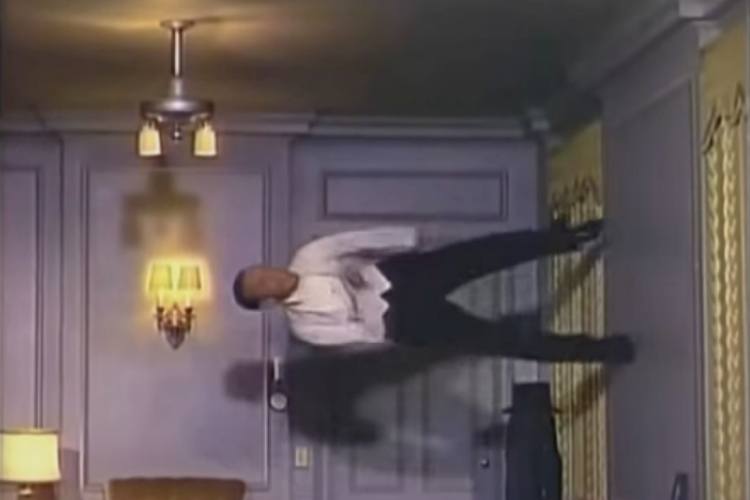 Of course, anything Astaire could do, Ginger Rogers could do— backwards and in high heels. Here they are in 1936’s Swing Time. 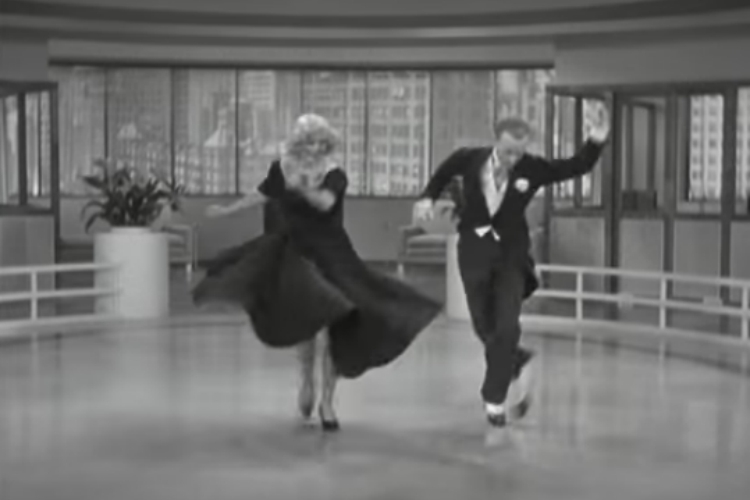 And who could ever forget this iconic scene of Shirley Temple dancing on the stairs with the one and only Bill “Bojangles” Robinson in 1935’s The Little Colonel?

So many magical moments! What other ones stood out to you? Were any of your favorites featured? How many could you name? Every time you watch, you’ll notice a new one! If you want the full list, check out Nerd Fest UK’s YouTube channel. Tell us what you thought of this fun mash-up— after you finish dancing along!

P.S. Did you somehow miss the original movie dancing mash-up that inspired Binder? We’ve got you covered! Watch it below. And if you still haven’t had enough of “Uptown Funk” after that, check out our story about Shirley, the 60-year-old hip hop expert who owns a routine set to it.