Ever hear the phrase, “one man’s trash is another man’s treasure”? This is certainly the case when it comes to clothing sometimes. Take ripped jeans for example, one of the hottest commodities to be sold in the 90s. People went ga-ga over the holes and ragged look—the more rips, the better!

Not only that, but if you can remember, people would pay hundreds for these jeans with rips and snags. Naysayers could never understand why people would want to go broke for jeans that looked like they were heavily worn and should be in the trash. However, they remained super trendy throughout most of the decade.

Lately, fashion experts have been saying the ‘90s have been making a comeback, and they might be right—especially when it comes to that grungy type of look. That was made apparent when Nordstrom, a popular clothing retailer, put a new shoe up for sale.

The Golden Goose men’s sneakers are called the “Superstar Taped Sneaker” and literally look like they’re falling apart. They’re brand new shoes, but they have fake dirt all over them (or real dirt? It’s unclear), and have tape on them to create the look as if they’re becoming undone (because apparently that’s cute?).

The description of the shoes on the websites reads: “Crumply, hold-it-all-together tape details a distressed leather sneaker in a retro low profile with a signature sidewall star and a grungy rubber cupsole.” 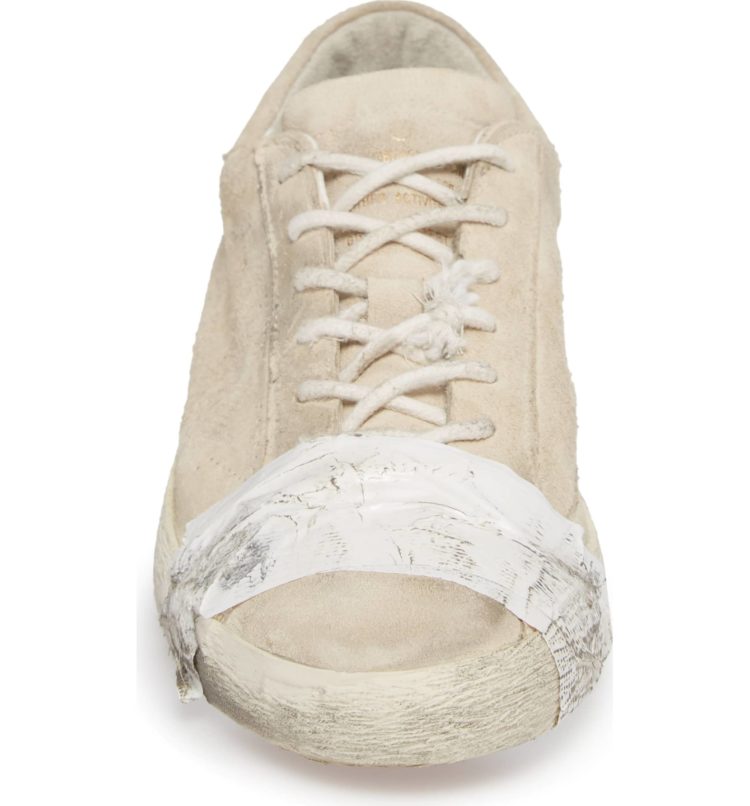 The clincher? The price of the shoes is a whopping $530.

We know what you’re thinking: Who would buy such a shoe for such an outlandish price? We were thinking the same thing until we saw that the sneakers are sold out on the Nordstrom website. Mind. Blown.

The shoes boast a five-star review, with customers raving about how great they are.

“Sadly, I’ve been wearing my Birkenstocks with socks waiting for the ever coveted Golden Goose to finally appear. Can’t wait to pair these fashionable beauties with my “No Fear” shirt, flannel, and oversized jeans, I’ll be the hippest gal at the mall,” someone wrote.

“Mugatu designed a similar shoe in 2001, but I’m glad to see the inspiration and trend came back into fashion. One of the problems with the older designs was the fact that the tape served a functional use, over a decorative one. Serious upgrade if you ask me,” another buyer wrote.

“Finally something my bf would wear out!” a third customer stated.

Well, they must be doing something right. The shoes were made in Italy and feature a lace-up style, removable insole, and leather upper, leather and textile lining, and rubber sole. They’re only sold in whole sizes, so Nordstrom recommends if you usually wear a half size to try the size up.

What’s next, shirts covered in dog hair? Pants with their own mud stains? Whatever it is, we’re sure there will be people who scoop it up in no time!

What do you think of these shoes and the grungy trend that’s coming back? Would you ever buy something like this?