The relationship between police officers and citizens has been largely negative as of late. At least the encounters we most frequently see on the news are. So when a police sergeant recently responded to a noise complaint in Carrollton, Texas, it could have easily become one of the horror stories we’ve seen time and time again.

But this story has a much different ending, thankfully.

When Sgt. Todd Burnside was called in to handle an outside noise complaint, he pulled up in his cruiser to discover a group of young men meeting in the street. He approached them peacefully, asking if they were having a party. What happened next was captured on Burnsides’ body cam.

After asking what the guys were going, they informed the cop that they weren’t trying to cause a disturbance. “We’re having a dance practice,” one man informed Burnside.

That’s when Sgt. Burnside learned that David Opegbemi and his groomsmen were holding a secret dance practice, as they had been for the previous four weeks. The guys were going over their dance as a surprise for David’s bride on his upcoming wedding day.

The men asked if Burnside wanted to see their dance, to which he said he definitely did! They broke into their adorable routine to “My Girl” by the Temptations right there in the street, and it’s incredibly adorable!

After Sgt. Burnside applauded the dance and congratulated the groom-to-be, he left the dancing groomsmen to continue his patrol. Later that night Carrollton Police Department shared the sweet encounter on their Facebook page and captioned the video, “We see a lot of bad. But we see a lot of good too.”

We love this story! First of all, this dance is so sweet, especially the fact that the party is practicing in the street at night just to keep the bride in the dark. But it’s also amazing that this situation played out in such an encouraging positive way; as one of the groomsmen noted, this cop didn’t enter the scene in an aggressive or angry way. 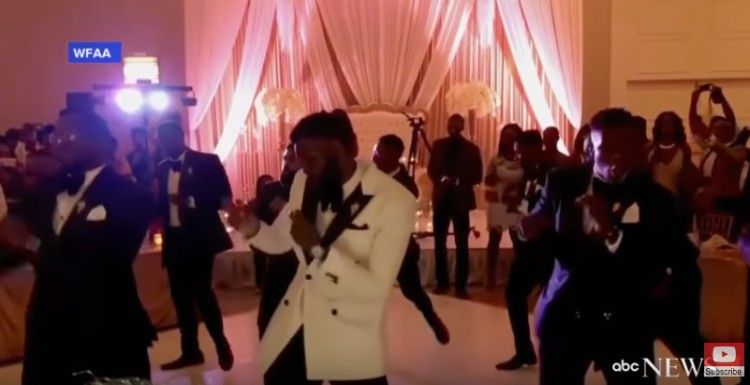 “He was so cool, and we just had a good time. That’s what cops should do, you know?” The young groomsman said. “You shouldn’t come in and be initially intimidating when you approach young, black men.”

Likewise, Burnside agrees that this is how police officers should deal with people, no matter their race, gender, or anything else about them.

As for the groomsmen dance, David says his blushing bride, Tiera, was thrilled about her epic surprise. The group busted out their adorable moves at their wedding a few weeks later and did an amazing job! We’re glad Sgt. Burnside got a sneak preview anyways!