New York Giants defensive back Logan Ryan shared scary news about his wife, Ashley, during a Zoom press conference this week — crediting one of the team’s trainers for potentially saving her life.

While Ryan was undergoing post-game treatment in New Jersey, he received a text from his wife, who was in Florida to check on their home and cast her ballot for the election. She was complaining of severe stomach cramps, Ryan told reporters, and had initially planned to try to sleep off the pain.

Ryan says he grew concerned about his wife’s well-being, and relayed her symptoms to Justin Maher — a trainer for the team. Maher encouraged Ryan to have his spouse evaluated immediately.

The move proved to be vital, as it was determined at the hospital the symptoms Ashley was experiencing were the result of an ectopic pregnancy. An ectopic pregnancy occurs when an egg is fertilized and implants outside of a woman’s uterus. In this case, the egg implanted in her fallopian tube, which had then ruptured.

Ashley recounted the experience on her Instagram page, explaining that she had been experiencing days of ‘unbearable’ abdominal pain. Though she says she had planned to take TUMS and ride it out, she instead heeded Maher’s advice, allowing her sister to drive her to the E.R. 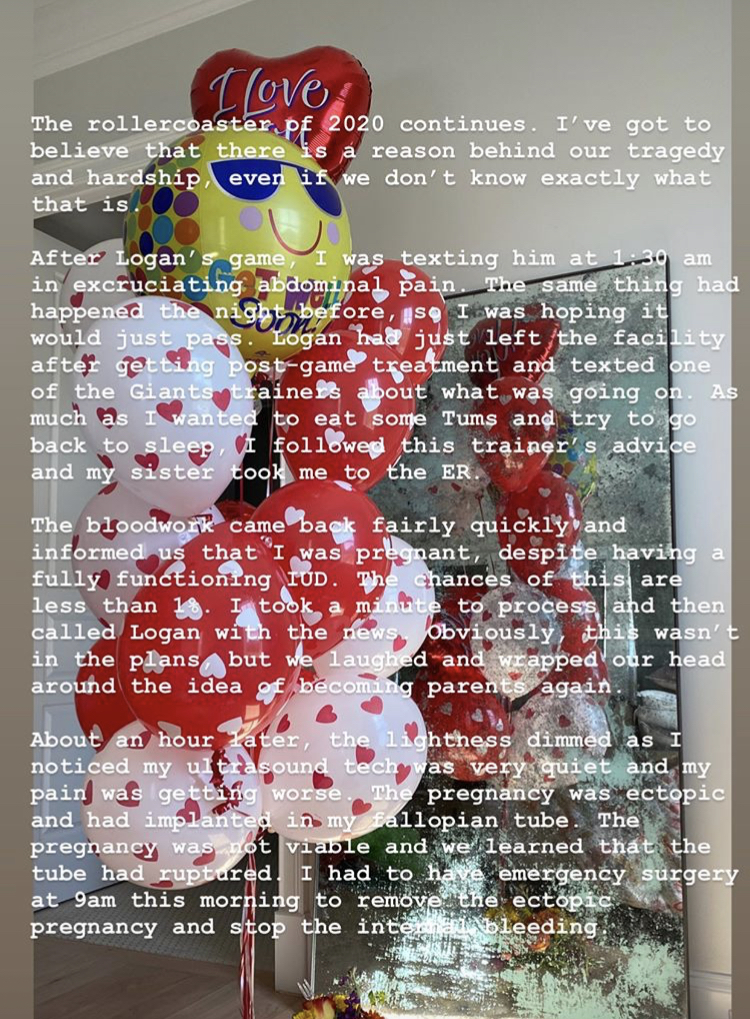 When she arrived, Ashley says she was informed she was pregnant, despite her IUD. The news shocked her and her husband, she says, as pregnancy with an IUD occurs in less than one percent of cases. Unfortunately, due to the fact that the pregnancy was ectopic, it was determined it wasn’t viable.

“She ended up going to surgery … and they ended up saving her and preventing a lot of what could have been done,” said Ryan. “It could have saved her life or saved a lot of internal bleeding there.”

Ryan went on to praise the Giants organization for its support — not just from his trainer, but also from his coach, Joe Judge. According to Ryan, the coach told him not to worry about attending practice, encouraging him to go to Florida to support his wife if needed.

“That is the type of organization we have here,” he said. “That’s what Joe is as a man and as a coach.”

As for Ashley, both she and her husband have acknowledged she is recovering well. On her Instagram page, she thanked Maher for his guidance, as well as her husband for his support as she processed this ‘whirlwind’ event.

“I’m so thankful for a husband who smiled at the potentially life changing news of an unexpected pregnancy and was on board and ready for the adventure even though it wasn’t in the plans,” she said. “Logan’s support never wavers. His strength gives me strength, and our hearts are so aligned.”