You Have to Watch This Brave Nanny’s Harrowing Rescue!

If you have ever been put in charge of a little one, then you know just how fun—and how scary—the job can be. You see, babysitting isn’t all about finger painting and chowing down on snacks; it can also involve putting your safety on the line to protect vulnerable kiddos from potentially dangerous situations.

Just ask nanny Jenna Lee Baker. She recently had to test the limits of her job description by rescuing a child from a burglar that had broken into her employer’s home.

Earlier this month, the Irvine, California nanny had just returned to the home after running errands with the family’s 3-year-old son, but as soon as she opened the door to the large, suburban home, she knew that something was wrong.

In an interview with Inside Edition, Jenna describes what it was like to come face-to-face with a ransacked home, with the knowledge that the burglar was still inside. “It was just sheer panic,” Jenna remembers.

Fortunately, the courageous nanny’s “panic” didn’t get in the way of her survival instincts. Instead of freezing up, Jenna quickly called the little boy’s name, and when he ran towards her, she picked him up and got out of the house as quickly as she could.

The good news is that no one was hurt in the incident, but the bad news is that the burglar is still at large. The cowardly thief is pretty lucky to be out on the streets, especially considering the home’s security cameras caught some pretty clear images of him stealing from the residence! 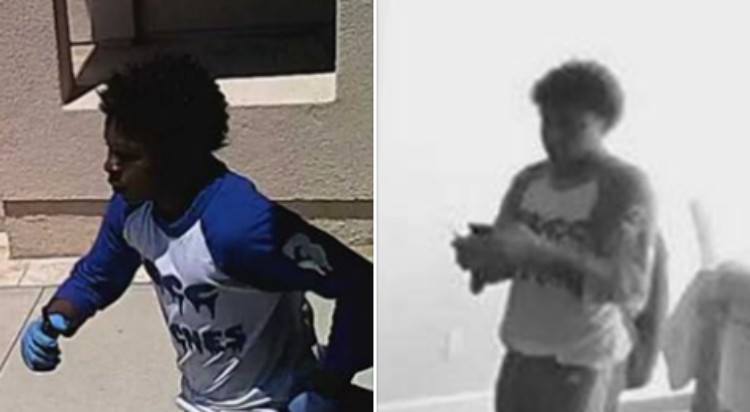 A play-by-play of the scary robbery

Believe it or not, this home invasion happened right smack dab in the middle of the day—between 12:20 and 12:37 pm on a Monday afternoon. Clearly, the thief thought that the house was going to be empty for some time because he took his sweet time during the invasion. This wasn’t just a “grab and run”; he examined practically every inch of the home!

The unknown man entered by smashing a sliding glass door that faced out to the backyard. After successfully breaking in, he first helped himself to the nanny’s purse that had been left out on the kitchen counter, then walked upstairs where he moved from room to room, looking for valuables to steal.

Just after the 15-minute mark, the burglar heard Jenna come home, and jetted down the stairs and out the open garage door, making the escape and running one way, while she ran the other, with the little boy in her arms.

Because the Irvine Police Department has yet to track down the man in the video, they have asked the public to come forward with any info they may have on the perpetrator.

Talk about a frightening experience! To meet the intrepid nanny and see security footage of the burglar robbing the home, be sure to watch Inside Edition’s video below. We are so happy that both Jenna and the little boy got out safely.

We’d love to hear your thoughts on this story! Have you ever been a victim of a home invasion? If so, how did you get through it? How do you keep your home safe and secure?