Wedding gifts are a pretty standard thing across the board. Every now and again you’ll hear of the creative gift, but mostly, people are sticking to the registry and buying you what you asked for. That means you and your partner are soon to be swimming in dishware, kitchen appliances, and monogrammed towels. But even the most out-of-the-box wedding gift doesn’t hold a candle to the mystery gift that Kathy and Brandon Gunn received on their wedding day.

The strange gift came from Kathy’s Great Aunt Alison. The two are very close, and Kathy considers her a “grandmotherly” figure in her life. Aunt Alison decided to give something that her favorite niece had not put on her registry. Instead, she gave the newlyweds a wrapped box that had a note on the outside which read: “Do not open until first disagreement!” 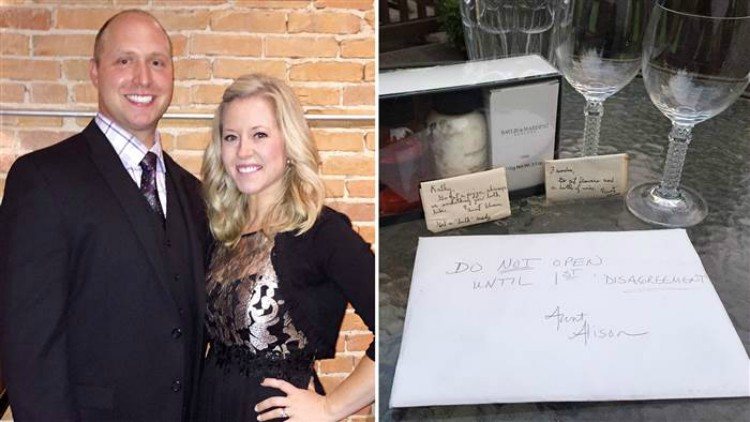 TODAY
What in the world could that mean? You have to imagine the couple must have been flabbergasted and intrigued by the bizarre present, but they resisted opening the gift on sight. Instead they put it away for when they felt they truly needed it.

Nine years later, the Gunn’s still hadn’t opened the mystery wedding gift. If you love spoilers (like me), you’re probably wondering how they had the fortitude to resist this big question mark of a present – but their reasoning is pretty solid.

“When you first get married, there are growing pains: learning how to live with someone else, finding out their crazy quirks,” Gunn explained. “The issues change depending on how long you’ve been married and what’s gong on in your life … first you fight about about picking up clothes off the floor, then later you fight about not getting sleep because of colicky babies.”

Considering that Alison been married to her husband, Bill, for 50 years before he passed away in 2004, the couple assumed the box held the ultimate secret to love…or something epic along those lines. In their opinion, it was best to not waste the secret to making marriage work on an argument about laundry; the secret gift needed a special occasion, they thought.

But in fact, the reason the couple opened the gift at all wasn’t because of a massive (or minor) fight. Kathy and Brandon opened the secret box when they were stumped trying to choose the perfect wedding present for their engaged friends. When trying to think back to their favorite gifts that they received, they remember the mysterious box and decided to open the present then and there.

What was inside was not what they were expecting.

Within the box was wine glasses, candles, and money to buy – wait for it – pizza and wine. Great Aunt Alison is officially my hero. She even wrote a short note to each of them, simply giving them instructions of what to go buy to help them recover from their “first disagreement.” 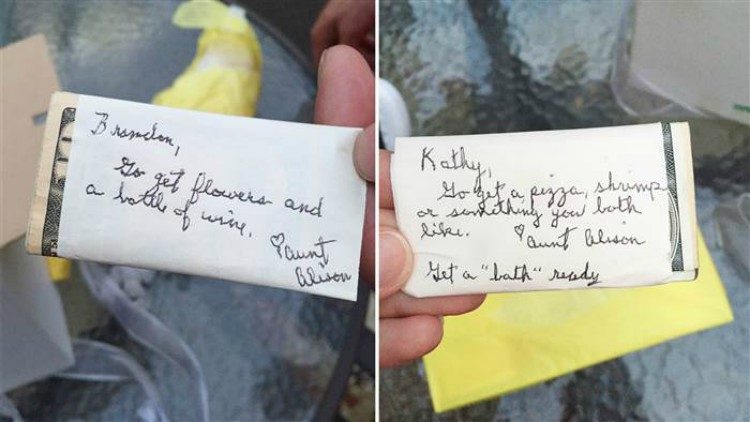 TODAY
The Gunn’s got a good laugh (and free wine and pizza) out of the nine-year-old present, but the mystery box had become so much more to the couple over the years. The very existence of the present gave the couple perspective on their minor disagreements, giving them the ability to work through arguments that might have otherwise soured their relationship.

“It really forced us, every time we had a disagreement, to think about the bigger picture and ask, ‘Is it really that big of a deal?'” said Gunn.

What a beautiful gift and a wonderful story! Even if you and your partner don’t have a “mystery gift” lying in your closet, consider this inspirational present as a new perspective on what really matters in your relationship. It could just give you a whole new way of looking at things.

And, at the very least, it has given us definitive proof that pizza and wine is the solution. Always.