Halloween is the best time for epic holiday decor. Aside from Christmas, there’s not a time of the year that you’ll see cooler home decorations. Whether it’s a front yard filled with spooky tombstones, or windows illuminated with creepy, moving graphics, Halloween decor knows no bounds.

And although we’ve seen a lot of cool, creepy ideas in the past, this might be the coolest we’ve ever seen.

A professional face painter from Ohio named Amanda Destro Pierson decided she wanted to do something a little different for her Halloween decorations; she wanted to use her skills with a brush to transform her garage door into something monstrous.

After painting toothy jaws on her automatic garage door and two terrifying, green eyes above, the face of a creepy monster was glaring out from Amanda’s home. But this is far from the coolest part! When Amanda opens her garage door, the jaws of the monster close, an effect which is impossible to look away from. 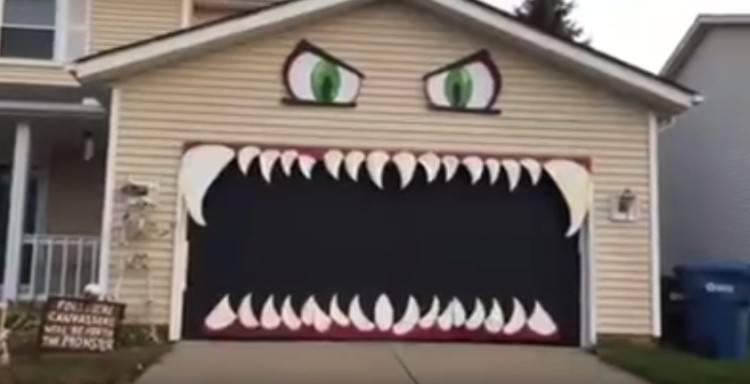 This became clear when Amanda posted a video on Facebook of the spooky garage door opening and closing. It quickly went viral, and now this epic Halloween decoration has gotten over 25 million views.

We can see why! Seeing this monstrous mouth close, filled with its rows of curved, creepy fangs, is literally hypnotizing.

Amanda got the idea off of Pinterest and decided she would give it a go on her family’s home in Parma, Ohio, near Cleveland. Two weekends ago, armed with buckets upon buckets of paint, she spent about 10 hours putting it together.

It took her a few hours to cut out the design and five hours to paint the garage, not to mention all the trips to the craft store!

After sketching out the design, she hand-painted everything on craft foam and used duct tape to hold the teeth in place. She hung the eyes using siding hooks and fishing line.

Since the video took off of Facebook, the story has been picked up by the Huffington Post and the TODAY Show, who interviewed Amanda about all the attention the monster garage was receiving online.

“It’s ridiculous,” Pierson told TODAY about her popular video. “I’ve been laughing a lot about it. I’ve always wanted a house so that I could decorate it for Halloween, which I love doing more than for Christmas.”

Pierson is a professional face painter and graphic designer, and she and her husband, Andrew, and stepdaughter Kylee, 13, usually dress up in elaborate costumes for Halloween. So having a house that she could decorate for her family’s favorite holiday has been a dream come true! Not to mention a popular statement in her neighborhood.

“People have been honking their horns and waving when they see it,” Pierson said. “I would say it’s just about all been positive.”

She’s gotten so many questions about the house that she’s looking to put together a kit for sale next Halloween so that her neighbors can make their own monster garages!

What do you think about this amazing Halloween decoration? Share your thoughts in the comments section below.